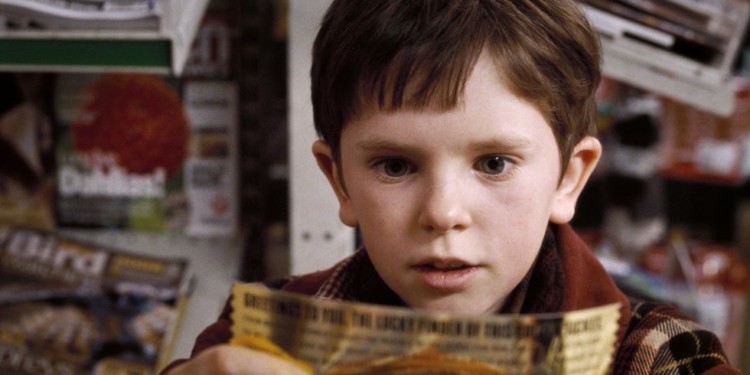 For nearly 15 years no one has seen a single worker come in and out of Willy Wonka’s (Johnny Depp) chocolate factory.

Charlie Bucket (Freddie Highmore), who lives in a tiny rundown house with his very poor parents (Helena Bonham Carter and Noah Taylor) and both sets of grandparents, is fascinated by the great factory which he can see from his bedroom window.

Then one day Wonka suddenly announces he plans to open up his factory and reveal all of its secrets to five lucky children, who find golden tickets hidden inside five Wonka chocolate bars.

Charlie is ecstatic when he finds one of them but can he survive the factory tour and win the ultimate prize?

Dark and sinister, yet wonderfully surreal. Just how Roald Dahl wrote it.

It’s another visual masterpiece by Burton and guaranteed to have you roaring with laughter thanks to an unbelievable performance by the great Johnny Depp.

His Willy Wonka seems to have been inspired by Michael Jackson, in his delivery and mannerisms, with a touch of the Madame Tussauds about it.

Freddie Highmore, acting with Depp for the second time (after Finding Neverland), is outstanding while Deep Roy is incredible as the Oompa-Loompas. Yes, he plays every single one of them and they are all quite scary, though small.

My only gripe is that the Buckets who sound terribly British and live in a hovel in a Victorian looking city talk about dollars and candy which sounds completely out of place.

Having said that, this is a deliciously bizarre film which will have you laughing one minute and send shivers down your spine the next.