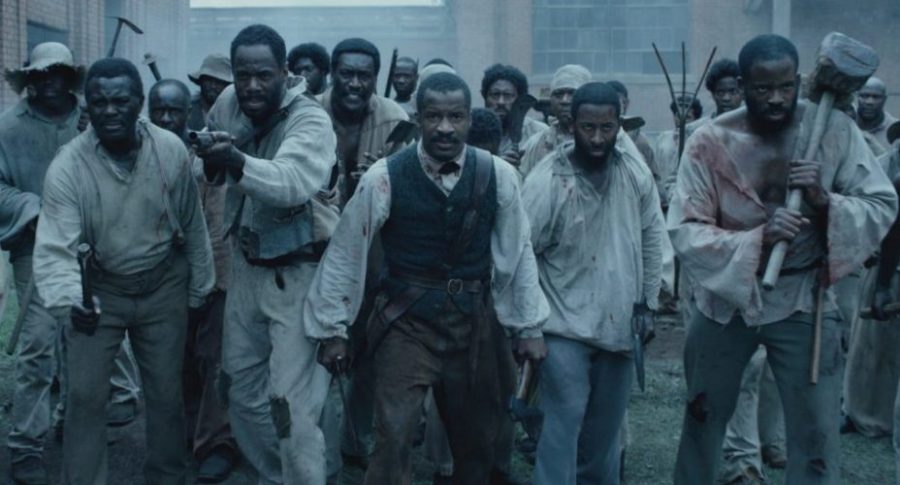 It’s the early 1800s in Southampton, Virginia and the kindly wife of a plantation owner, Elizabeth Turner (Penelope Ann Miller), has taken an inquisitive young slave boy, Nat, under her wing and taught him how to read…although, because he’s black, she deems that the bible is the only book that’s suitable for him.

Years later, as a young adult, Nat (Nate Parker) is literate enough to become a preacher on the plantation, now owned and run by his childhood friend, Elizabeth’s son Samuel (Armie Hammer).

Times are tough across America’s southern states. General conditions for slaves are getting even more spartan and there are rumblings of discontent.  A local reverend (Mark Boone Jr) tells Samuel that other slave owners will pay him to let Nat preach to their slaves, to calm them down to prevent an uprising.

As the pair visit nearby plantations, Samuel and Nat are increasingly horrified by the brutality of the daily lives of other slaves, but the prospect of financial ruin for Samuel sees him slowly toughen his ways, under pressure from influential neighbours who can help his business to survive.

Nat is pulled in the opposite direction and when he sees his own wife (Aja Naomi King) beaten beyond recognition by a band of slave-catchers, he decides that the only way forward is to round up as many fellow slaves as he can and launch a violent revolt against their masters, to match the ruthlessness of the white oppressors.

When The Birth of a Nation was first seen by audiences at the Sundance Film Festival, within days of the explosion of the “Oscars So White” controversy, a powerful slave drama looked like the perfect vehicle to persuade the Academy to garner some black talent with Oscar nominations next year. Picking up awards and the festival’s most lucrative ever deal, it looked set to appeal to audiences, critics and studios, as well as awards voters.

But in August, a controversy emerged which could only make viewers and voters alike question whether Nate Parker and his film could be honoured in this way; it was revealed that not only had he and his co-writer Jean McGianni Celestin, been accused – and cleared – of raping a woman while university students, more than fifteen years earlier, but the complainant had recently killed herself.

A man once accused of rape has used the brutality of rape as one of many tools used to suppress the vulnerable, while presenting himself as the epitome of honour and heroism. Suddenly, its halo slipped, a film that was once viewed as THE film to beat come Awards season was more cautiously being seen as just AN Other film; viewed outside the prism of the “Oscar So White” controversy, it could perhaps be reviewed more fairly, on its own merits.

With that in mind, there’s no doubting the ambition of this film, with a little known black actor-turned-first-time-feature-director taking on white Hollywood to tell the story of a unusually literate slave who rose up against those abusing his disenfranchised brethren.

Most of the narrative is linear, but a few flights-of-fancy into Nat’s dreams feel a little clunky and add little to our understanding of his character. Perhaps necessarily for the story, Nat appears if not in every shot, in every scene, making it feel dangerously close to a vanity project. An increasing reliance on religion to justify his actions also adds a somewhat messianic element.

The unfolding of the plot is also a little uneven and, at times, somewhat inconsistent; Nat and Sam are introduced as childhood friends, but this is soon forgotten as Sam turns slowly from sympathetic owner to being almost as heartless as his neighbours, without any pangs of guilt. And there are times where we see full-on violence – such as the force-feeding of a hunger-striking slave – yet at other points, rapes, beatings and floggings happen either off-camera or with no more than a close-up of the victim’s face.

Parker himself is better as star than director, delivering an impassioned performance that’s bristling with simmering frustration and a burning sense of injustice.

Nevertheless, the imagery is powerful, the sentiments raw and heartfelt and viewers of all ethnicities will feel equally shamed that any society ever allowed humans to behave like that to other humans.

That said, this is a fatalistic tale that serves to make viewers rightfully angry about a state of affairs that no longer exists. However, it won’t escape the notice of many that approaching the tail-end of the first black family’s residence in the White House, such campaigns as “Black Lives Matter” and the somewhat more glib “Oscars So White” remain dominant issues in the land of the free.

And if, after discussing the horrors of centuries of the physical and sexual maltreatment of black people, it’s not too insignificant to wonder about whether any black people might be given a golden statuette for pretending to be someone else, if the Academy is too squeamish to honour the slightly tainted Birth of a Nation, the end of the year has spoiled voters somewhat, with films including Moonlight, Loving, A United Kingdom, Queen of Katwe and Oscar-favourite Denzel Washington’s The Fence all joining Don Cheadle’s performance as the jazz legend Miles Davis as uncontroversial contenders.