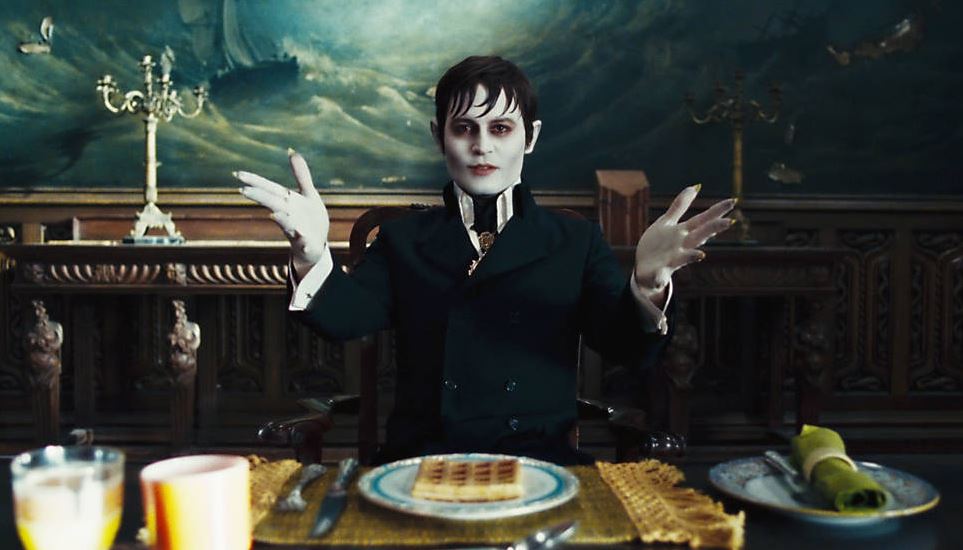 In the 1760s, the Collins family moved from Liverpool to America’s northeast coast and set up a fishing business so successful that a whole town grew up around it.

But when the advances of their lowly maid, the mysterious Angelique (Eva Green), were spurned by the heir to the business, Barnabas (Johnny Depp), she cursed him to become a vampire, to live for eternity in a lead-lined coffin, and vowed to destroy the family.

As it turns out, eternity lasts only about two hundred years; in the early 1970s, some builders dig up his coffin and open it, to the delight of the thirsty blood-sucker.
Barnabas returns to the family mansion to find a decrepit building, with only a handful of impoverished residents, led by the family matriarch Elizabeth (Michelle Pfeiffer).

He is determined to rebuild the family’s fortunes, distracted only by an inexplicable attraction to the new governess (Bella Heathcote) and a rival fishing firm, Angel Bay – run by an ever-hopeful and still-scorned Angelique.

This is a curious beast – it looks and feels like a Tim Burton film, from the gothic horror themes to the cast of favourites, including Johnny Depp and Helena Bonham Carter.

But somehow, it doesn’t have the gravitas one might expect from one of the most accomplished and idiosyncratic film-makers working at the moment.

It touches on such profound areas as love unrequited for hundreds of years, revenge and honour against the backdrop of a beastly horror film with frequent highly comic moments – all of which makes it feel a little too much of a mixed grill; is it a romantic tragedy, a straight-up horror film or light comedy?

There’s no reason, of course, why a film can’t straddle the genres, but it still needs to feel like it knows what path it’s on.

It’s a particularly clever touch visually, allowing our protagonist to journey two centuries into his own future – but still forty years into our past; through is eyes, we are amazed by such ‘modern’ innovations as a neatly tarmacked road, the McDonald’s arches and a Hammond organ.

Burton’s colourful camp stamp is all over this confection, but for a film that involves so much talent, it sadly lacks bite, not least because its themes offer little that feels fresh – romantic jealousy, cantankerous adolescents, business rivalries, family honour, gloomy mansions, precarious peaks, ghosts – and of course, there’s been no shortage of fanged blood-suckers gracing our screens in recent years.

It is, perhaps, only the incomparable Depp as the anachronistic Barnabas, lurking in the shadows, that gives this film any kind of unique selling point. Even pale-faced and sunken-eyed, he brightens up any project.

It almost feels like the cast and crew just wanted to take time off from the day job, hang out with their mates and have a bit of fun at the weekend.

And it certainly is fun – highly entertaining, if not at all ground-breaking or indeed surprising.