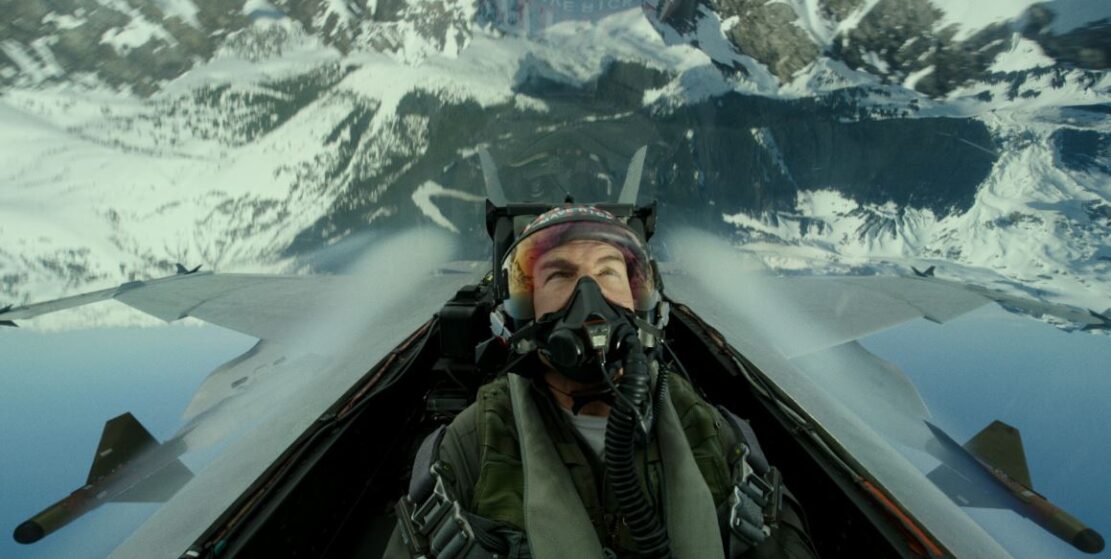 Maverick by (code) name and Maverick by nature, more than three decades after we last met Pete “Maverick” Mitchell (Tom Cruise), he hasn’t progressed past the rank of Captain and is still rubbing the admirals up the wrong way. After pushing ahead with a super-sonic test flight against orders, he’s sent back to the Top Gun training facility – as a teacher.

He doesn’t want to be there any more than the base commander (Jon Hamm) wants him there, but Maverick still has the support of his former comrade Iceman (Val Kilmer), who’s now in command of the entire Pacific Fleet.

Maverick has to prepare twelve of the best young aviators for an almost impossible mission to destroy an underground enemy nuclear facility before it gets up and running.

His pupils include Rooster (Miles Teller), who holds Maverick responsible for the death of his father, Goose, and is angry that Maverick held back his military career. The trainees are all jostling for position, as only six will be picked to take part.

Can Maverick bring the team up to scratch? Will the bosses have to let him back into the cockpit? And – this is Top Gun after all – will he finally settle down with a woman (Jennifer Connelly) who can bring him back down to Earth?

Top Gun: Maverick has got to be challenging for the record of the longest time between a blockbuster and its sequel – it’s the follow-up you didn’t know you were even waiting for – but if you were, it’s worth the wait.

From the moment the musical score opens proceedings, anyone around in the 1980s will be thrust back to their youth with a jolt, and watching Tom Cruise slip back into that flight jacket will have you rifling through your own wardrobe.

Dedicated to the first film’s late director, Tony Scott, Joseph Kosinski’s sequel will thrill you from inside the cockpit, where you’ll get the best view from the sky, at speeds of up to Mach 10.

You get the same competitiveness between the trainees as you got last time, with the added layer of the independent-minded tutor between them and the bosses – and this time, the romance is moved from the youngsters to the middle-aged – not that they look it.

Apart from the odd close-up of Tom Cruise’s slightly grizzled chin, he turns up the charm and looks almost as young as his charges – and it’s certainly both refreshing and authentic that they’ve resisted the temptation to have the older star go after one of the younger women in screen. But why would you need to, when Jennifer Connelly, as his apparently on-and-off girlfriend of the intervening years, doesn’t seem to age either.

There’s no mention of Kelly McGillis, the long-lost love-interest of the first film though. In fact, you could almost forget there ever was one as you won’t need to remember much from the original; a handful of flashbacks, obviously placed photographs or lines of expositional dialogue will tell you everything you need to know to make sense of it all.

It won’t win any prizes for originality; the plot ticks every box in the block-buster screenplay handbook – even down to signposting dialogue, scenes in advance, but rather than feel arch, it works every step of the way – from the romance to the rivalries – between the pupils, between Maverick and his bosses and between Maverick and Rooster – and preposterous as the mission is, you can save yourself some nail-biting as a film like this is never going to end up too far from where you expect it to.

Perhaps the only thing that jars is the ages of the characters; the first time around, the trainees were in their mid twenties, while this time, they’re mostly in their mid thirties, but given that we see Rooster in the flashbacks, before Goose’s death, he should be well into his 40s. But if we imagine this film is set a decade ago – it was indeed shot before the pandemic – such anachronisms vanish and you can sit back, strap yourself in and enjoy the ride.