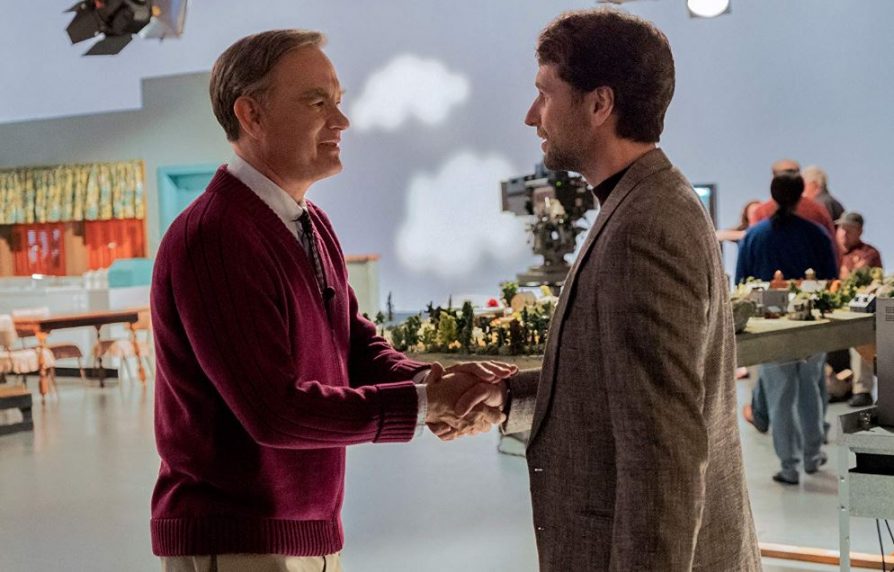 Magazine journalist Lloyd Vogel (Matthew Rhys) is known for his hard-hitting exposés for Esquire magazine so he’s a bit taken aback when his editor (Christine Lahti) asks him for a short profile of the veteran children’s TV presenter Fred Rogers (Tom Hanks).

He’s recently had an unwanted encounter with his estranged father (Chris Cooper), so his mind isn’t really in the right place for work, but he heads to see Mister Rogers, prepared for a quick chat and a quick escape.

For non-US audiences, unfamiliar with Mister Rogers’ Neighborhood, for more than three decades, Fred Rogers presented a wholesome educational TV show for children, in which he taught them about the world, while also trying to ensure their emotional well-being by teaching them how to deal with their feelings.

As Lloyd asks him questions, Mr Rogers keeps turning the questions round on him, as if trying to help him deal with his own feelings.

And it’s this caring side that Lloyd finds hard to believe.

Basically, Lloyd wants to know “Is he for real?”

“Don’t ruin my childhood,” his wife implores, when he suggests digging deeper, to try to understand the real Mr Rogers.

What this cantankerous reporter thought was going to be a boring assignment, writing a brief profile of someone of little interest to him, turns out to be a life-changing experience.

This will work on a very different level, depending on whether you are familiar with Fred Rogers or not. But by framing it as an episode of the eponymous show, with Mister Rogers talking directly into the camera to introduce some of the characters we’ll be meeting, director Marielle Heller quickly gives newcomers a crash-course to be able to approach the film with enough of an understanding of who we’re watching.

All the questions about Mister Rogers are just as valid whether you’ve grown up with him or never heard of him, but for many outside the US, he might come across, initially as quite creepy – his intensity and a level of empathy and interest that seems like there must be an ulterior motive at play.

But under the critical eye of Matthew Rhys’ cynical journalist, we get to go on the journey of discovery with him.

With a particularly interesting and almost detached performance, Tom Hanks makes this idiosyncratic TV host feel unnervingly real and in the fast-moving city-life of 2020, Matthew Rhys perfectly portrays the frustrations of everyday life. But it’s Heller’s telling of the story that makes it feel all the more convincing. All this talk about how there should have been a woman nominated for Best Director at the Oscars and that woman should have been Greta Gerwig? For Little Women? No. If any women did a particularly remarkable job of delivering an interesting and successful film about a difficult subject, that woman was Marielle Heller.

Based on a real-life profile of Mister Rogers in Esquire magazine by the journalist Tom Junod, this film has been embellished with the family feud – the more wound up the protagonist is, the further he has to travel to find peace.

Watching Mister Rogers’ empathy crush the cynicism and general frustration out of Lloyd Vogel, is delightfully uplifting and heart-warming – particularly as you see. through Rhys, how much happier you can be without the weight of the world on your shoulder.

We’re never quite clear what makes Mister Rogers tick – does he have an uncontrollable urge to help everyone he meets – to suck cynicism off the face of the earth – or is he just driven by an innate innocence?

And how he does it – how this children’s presenter seems to be able to work his magic on adults too – isn’t quite clear. It seems to be about persuading us to slow down a bit – to stop to think about life a bit more – not to rush to judgement – all of which seems a little obvious, if you take a step back.

So while you leave the cinema feeling better about yourself and life in general, you won’t particularly be any more aware about what you can take away from Fred Rogers – and his attitude to life – that will help you change your own.

You’ll have to find your own answers. And maybe that’s the point.