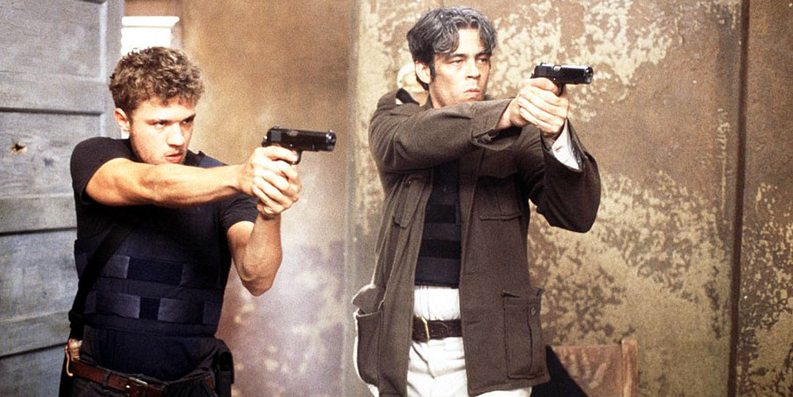 As its title suggests, guns play a significant part in this bloody story, but anyone who is not too squeamish will be rewarded with a clever, well-paced and stylish thriller from Christopher McQuarrie, previously known as the Oscar-winning writer of The Usual Suspects.

Parker – played by Ryan Phillippe – and Longbaugh – played by Benicio Del Toro – have long since given up trying to make an honest living.

Instead, they have turned to petty crime and selling samples of their blood and sperm.

It is on a trip to a sperm bank that they overhear a doctor talking about a surrogate mother who is being paid handsomely to carry the child of an exceedingly wealthy couple.

Hoping for an easy pay-off, they decide to kidnap her for a hefty ransom.

But they don’t realise that the father-to-be is not any old rich man – Hale Chidduck launders money for some of the most ruthless gangsters in America’s southwest.

When they move in to snatch the woman, on a regular check-up, they come up against two well-trained bodyguards.

Ingeniously thinking on their feet, Parker and Longbaugh get away with their prey, but of course, things don’t go to plan.

Our philosophising anti-heroes note that “a plan is just a list of things that don’t happen” and acknowledge that “the greatest distance between two points is between a kidnapper and his money”.

The problem is that not only is this distance indeed great, it’s also needlessly complicated.

As you might expect from the creator of The Usual Suspects, an ever-growing number of characters turn out to be interlinked in increasingly implausible ways.

With more twists than a bowl of fusilli bolognaise, you really have to concentrate to get the most out of this film.

If you give it any less than your full attention, it may seem like little more than a well-acted, cool road movie, punctuated with gun battles, philosophical observations and imaginative set-pieces.

In a film full of the kind of people no right-minded person would want to meet in a dark alley, Benicio Del Toro gives the stand-out performance as the calm but determined Longbaugh.

Ryan Phillippe is less convincing as the more emotional Parker. The ever-reliable James Caan is typically watchable as the ageing bagman, who points out that “a broken down old man” like him must be a survivor.

Another actor worth a mention is Taye Diggs, the bodyguard whose cool exterior hides his own secrets.

Juliette Lewis, as the heavily pregnant kidnap victim, isn’t given much to do, but it’s nice to see her in a film with her real-life father, who plays Caan’s long-suffering friend.

But the true star of The Way of the Gun is Christopher McQuarrie himself, who has really introduced himself as an all-round film-maker with imagination, flair and a talent for telling an original story.

A version of this review previously appeared on the BBC News website.