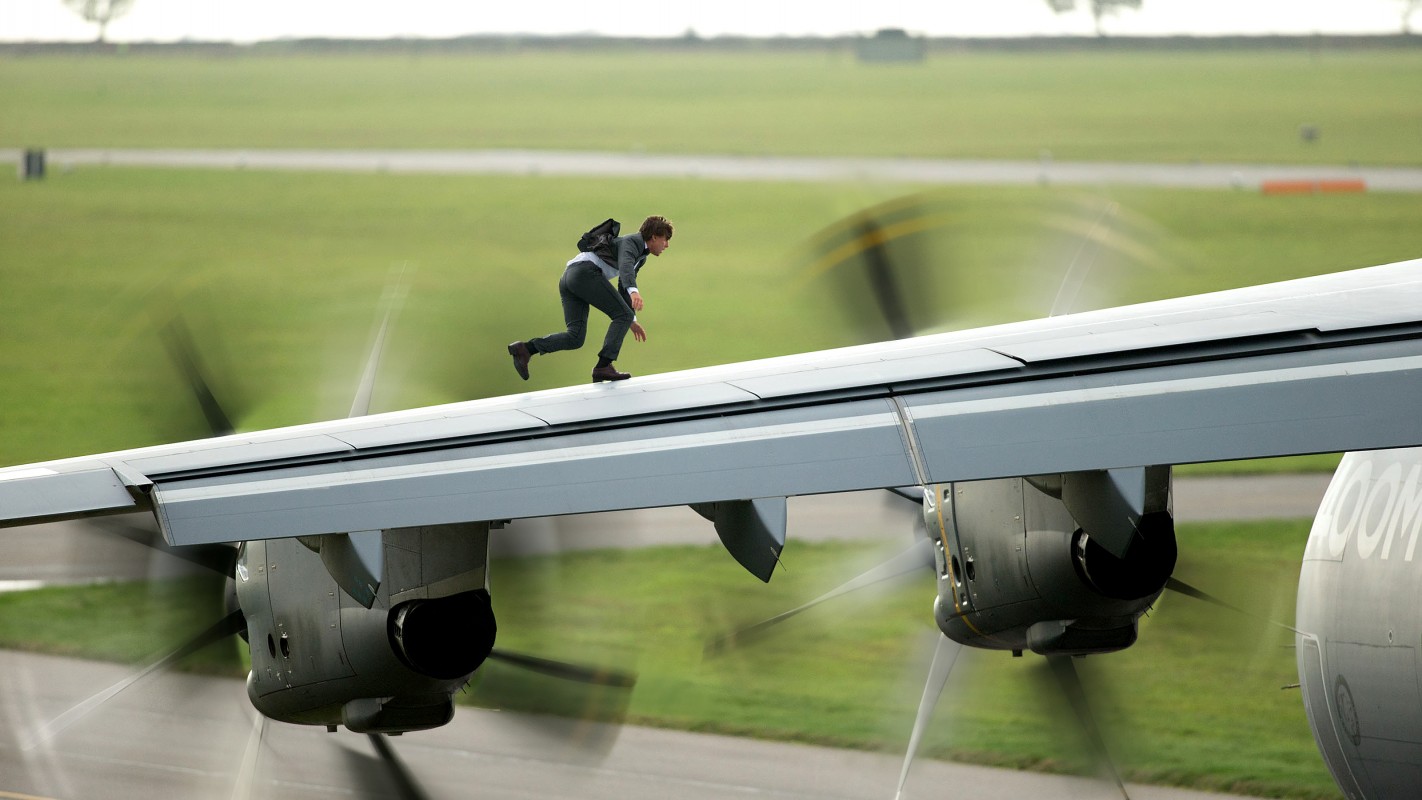 When an American Senate committee closes down the Impossible Mission Force, because of all the chaos it leaves in its wake, the whole IMF team is subsumed into the CIA, under the command of Director Hunley (Alec Baldwin).

But one IMF agent, Ethan Hunt (Tom Cruise) is still out in the field and determined to complete his mission – yes, an impossible one, of course – before Hunley closes in on him.

Hunt believes he’s uncovered a secret criminal organisation called The Syndicate, made up of disavowed foreign agents from all around the world.

Keeping a step ahead of the CIA, Hunt lures computer geek Benji (Simon Pegg) away from his CIA desk job to Austria, where he believes the life of the prime minister is under threat.

Everywhere he goes, Hunt’s path keeps crossing with a mysterious agent Ilsa Faust (Rebecca Ferguson); the way she seems to flip between helping and hindering him, he can’t work out whether she’s with him or The Syndicate.

With additional help from his former colleagues (Jeremy Renner and Ving Rhames), Hunt travels the world, trying to identify and catch and leader of The Syndicate (Sean Harris) and restore the reputation of the IMF – so that he can get a sixth film out of the franchise, no doubt.

From the moment Tom Cruise jumps onto the roof of a cargo plane, carrying nerve gas to terrorists, as it speeds up a runway, preparing to take-off, Mission Impossible 5, to give it its more manageable title, is essentially a string of action sequences.

Characters swing from lighting rigs at the Vienna Opera or slide down the elegant building’s roof, or there are motorbike chases as tightly choreographed as the hand-to-hand combat and an underwater assault on a vault to steal – well, who cares what they’re actually trying to steal, or indeed why? In typical Hitchcock MacGuffin style, it doesn’t matter what they’re after – all that matters is what they have to do to try to get it.

Rogue Nation is a constantly thrilling ride that meets all expectations promised by the franchise and even five films in, the sequences feel fresh. Oddly, where it feels tired isn’t so much to do with what’s happening in the Mission Impossible world, as it is the fact that so much of the action takes place Bond-like in London, while Bourne’s Jeremy Renner is running around being almost as much of a superspy as he was in his own franchise.

The casting is by turns lazy (most of the familiar faces from earlier films), predictable (the bad guys look and sound bad) and confusing (the White Queen’s Rebecca Ferguson is introduced, inexplicably speaking Swedish in an underground lair, deep below the streets of London and is unable to shake off her native Swedish twang when she returns to English – although there’s no explanation as to why this Swedish woman is a British agent).

The plot itself is similarly text-book – starting with the closing down of the IMF, showing that the IMF is indispensable and getting it reinstated, while following a chain of clues – some obvious and others so impossible that no-one except Ethan Hunt would even both trying to follow.

But regardless of a contrived and somewhat tired and unconvincing plot, and a film in which stuntman Cruise is clearly trying to show off, who could say “no” to a group of agents – by turns beautiful, ingenious, charmingly geeky and disarmingly loyal – saving the world under the radar, employing the most outrageously riveting stunt sequences at ground level, on rooftops and 5000 feet in the air?