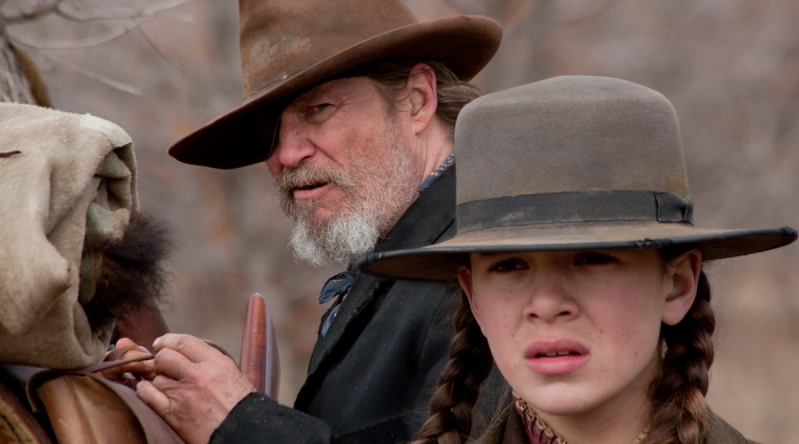 When her businessman father is murdered by one of his hired hands Tom Chaney (Josh Brolin), fourteen year old Mattie Ross (Hailee Steinfeld) heads off to tie up the loose ends.

Sending the body home, the precocious teenager stays in town, determined to find a US Marshal to help her track down Chaney to see that justice is done.

She won’t settle for anyone less than Rooster Cogburn (Jeff Bridges), an aging, alcoholic, who works alone but has a reputation for being the best – displaying ‘true grit.’

Cogburn is up for the job, but not with Mattie’s condition that she joins him on the mission. This is not a job for a young girl, but she’s persuasive and she has plenty of money to pay him.

As they prepare to head off in search of her father’s killer, Texas Ranger LaBoeuf (Matt Damon) arrives in town, trying to find Tom Chaney to take him back to Texas. Mattie is glad of the extra help in finding Chaney, but she’s determined that he should face the consequences of his actions where her father died – not across the border in Texas.

The unlikely trio head off into native American territory to hunt down Chaney and his gang.

As with the recent Brighton Rock, the film-makers here say this is a new adaptation of the original novel, rather than a remake of the film. Either way, the Coen brothers have delivered a thoroughly worthy film, with an eloquent script and sharp performances all round – particularly the two Oscar nominated turns from Jeff Bridges and newcomer Hailee Steinfeld.

While Bridges is tremendous fun to watch, what he does isn’t too different from last year’s Oscar-winning over-the-top, alcoholic wastrel, so he’s unlikely to be honoured again in the same way. He certainly fits comfortably into the cowboy boots of John Wayne and it’s a relief to see him back on form, after Tron: Legacy.

Overall, this is a slightly odd concoction. From any other director, this version of True Grit would be an enjoyable, perfectly serviceable western thriller, but somehow, it doesn’t really feel like a Coen brothers film; it’s a straight-forward, linear story with you-get-what-you-see characters – the good guys stay good and the bad guys stay bad. There’s basic moralising, but nothing particularly surprising or challenging for the viewer. There’s humour, but it comes mostly from Bridges’ reading of a script which, while praiseworthy, is at the very least inspired by a novel that’s so well-written, it’s now persuaded two sets of remarkable film-makers to adapt it for the screen.

Perhaps the most Coen-esque feature of this film is the typically gorgeous camerawork from the brothers’ regular collaborator Roger Deakins, who has notched up his ninth Oscar nomination for this film – his fifth courtesy of Joel and Ethan.

On the surface, True Grit 2010 feels like an important film, bursting with gravitas, but in truth, it’s a bit too easy and not challenging enough to bring the best out of a talented team, in front of and behind the camera, delivering a perfectly workman-like character drama that doesn’t leave as much of a lasting impression as the better movies bearing their names.