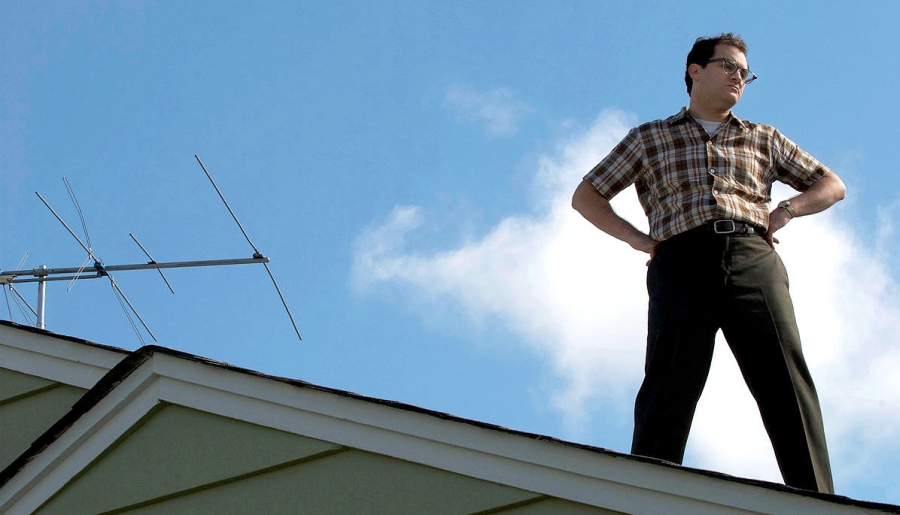 One bitterly cold winter, somewhere in the nineteenth century, an elderly man returns home to his wife in some eastern European forest hut and tells her in Yiddish about an encounter he had in the snow on the way home. She tells him the man he claims to have bumped into is long since dead. There’s a knock on the door. It’s him.
Anyway – then we get the titles and there’s no reference to any of this again.
What the film is ACTUALLY about is the hapless Larry (Michael Stuhlbarg), who – in a Jewish neighbourhood of America’s Midwest in 1967 – is struggling with his job as a lecturer, as his wife (Sari Lennick) is leaving him for another man and his wimp of a son Danny (Aaron Wolff) is approaching his barmitzvah.
As if that’s not enough, Larry has the usual familial woes; his bonkers brother Arthur (Richard Kind) is staying with him and Danny is being bullied as much by the guys at school as he is by his sister.
Larry needs guidance and seeks it from one rabbi after another, but from the junior clerics to the most venerable in the community, no-one can offer Larry any answers or the comfort he needs.

It’s difficult to know what to make of this.
It’s clearly the most personal of the Coen Brothers’ films, set – as it is – in the same time and place as their own barmitzvahs.
But while there is plenty of the uncomfortable humour you’d come to expect from the pair and there are many gems – both comedic and dramatic – it doesn’t really hang together.
Things are tough, Larry asks the rabbis for advice, doesn’t get any, so things stay tough.
There’s not much of a story arc in there – you feel sorry for Larry, but never get any sense that doing anything about his problems will even help him.
And because most of the funny things happen to him, despite his efforts to escape his troubles, you can’t even enjoy laughing at the humour, as it’s at his expense, and he’s not a bad man – he doesn’t deserve it.
The cast are universally excellent in what is required of them – and there’ll be times where you’ll want to hug Larry and throw things at everyone else, but the film needs more direction – more meaning – more emotion.
The preamble of the elderly Yiddish couple has no relation to the rest of the film which is both a disappointment and a frustration and you get a sense – throughout this film – that the brothers thought “we don’t care if anyone gets this – we’re the Coens, so we can do what we like.”
Imagine taking your favourite food – say tomato soup, a nice cannelloni, some chocolate cake and an amoretto latte – and then liquidising them. The drink would be a total waste of all the good things that make it up and would certainly leave a rather odd taste in your mouth.
There’s been much talk about how the film was cast with no big-name actors – Richard Kind is about the most high-profile character actor on show and for some, it’s their first big screen outing. But this is quite possibly not so much because of any great desire to stop stars detracting from the personal material – it might be that with this sadly mediocre material, they couldn’t raise enough money.
People who’ve grown-up in similar environments might get more out of this than those for whom Jewish family life is less familiar, so there is a very real sense in which “you don’t have to be Jewish to enjoy it – but it helps.”