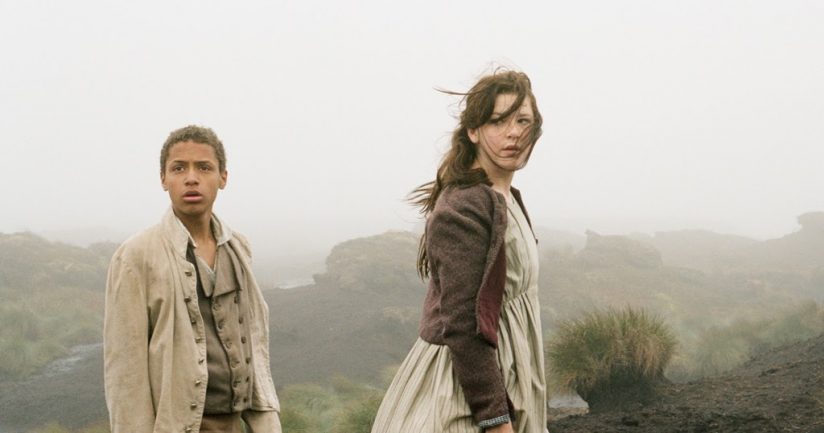 On a trip to Liverpool, the Yorkshire farm owner Mr Earnshaw (Paul Hilton) finds a young black boy (Solomon Glave) sleeping rough. He takes him back to his home, Wuthering Heights, adopts him into the family and christens him Heathcliff.

Mr Earnshaw’s daughter Cathy (Shannon Beer) soon grows fond of Heathcliff and before long, the pair become emotionally close, as they hang out together, around the farm and on long walks on the moors.

But Cathy’s brother Hindley (Lee Shaw) doesn’t take at all well to Heathcliff’s arrival. Feeling that he’s losing both his sister and his father to this newcomer, Hindley grows intensely jealous and uses every opportunity he can to undermine him – and even beat him. The relationship gets so bad that Hindley is sent away to college, but when his father dies, he returns to take over the farm and relegates Heathcliff from the status of a brother to little more than a servant, forcing him to sleep in the barn with the animals.

On one of their continuing walks on the moors, Heathcliff and Cathy end up at the home of the wealthy Linton family and Cathy soon develops a friendship with the son of the household, Edgar (Jonny Powell), which puts a strain on her relationship with Heathcliff.

When Heathcliff overhears Cathy saying she’s going to marry Edgar for his status, even though she’s really in love with him, he runs away to make something of himself.

By the time he returns, Cathy and Edgar are married and Hindley is desperately in need of money.

Heathcliff moves back in with Hindley, to provide him with an income, but spends most of his time, secretly meeting Cathy, behind Edgar’s back.

Some see Emily Brontë’s only novel as tragic romance, but not Andrea Arnold, whose directing career has gone from strength to strength, from winning an Oscar for her short film Wasp in 2005 to picking up a slew of awards for her first two features Red Road and Fish Tank.

Arnold proudly sees this as a brutal story and ensures that her telling of the tale comes across that way.

From the unsanitory conditions of the farm to the strong winds on the oppressive moors and the intense personal rivalries of all those involved, Arnold’s Wuthering Heights is a bleak and uncomfortable tale with few characters that the audience will want to latch onto.

At its heart is Heathcliff – adopted from the streets into a family that can’t really offer him what he was lacking, being unable to give back what was expected of him, being shunned by his adopted brother and later feeling that he’d been rejected by his soul-mate, his life is not smooth, but he doesn’t handle his troubles with grace. Initially ill-educated, his instinct is to shout and fight when he doesn’t get his way. We’re not really given any reason to like him, and when he ends up rejected by those around him, we often feel he deserves it.

Having such an unsympathetic central character can be alienating for an audience.

Arnold’s visual style – courtesy of long-time collaborator, cinematography Robbie Ryan – is also likely to keep some viewers at bay. It’s shot in an unconventional 4:3 format (the TV shape closes down the story, making it feel more claustrophobic than its Yorkshire moors setting might suggest), has many extreme close-ups, is usually quite dark, often out of focus, and frequently as shakey as a Paul Greengrass film; that style seems to work better for an action film than a drama and here, it’s often tough to work out what we’re actually looking at. Arnold uses the same cinematic techniques she’s previously used on housing estates in a period drama, which make for an unusual, but interesting combination.

Sounds is used to great effect too, whether it’s the wind or the flapping wings of the moths used to transition between scenes, and the effects are heightened by the lack of incidental music; apart from a song over the closing credits, the only music is provided by the characters singing to themselves, or each other.

The film is very much told in two parts – Heathcliff and Cathy as children falling in love and realising they can’t be together – and then the pair as adults, struggling with being kept apart. The first part is more interesting and more importantly, more coherent in a narrative sense.

For a viewer not familiar with the source material, and certainly not as immersed in it as the director, it’s always difficult to tell whether confusion might be the result of failings in the novel or omissions in the adaptation. One thing that’s certainly been left out is much of the dialogue; Arnold tells much of the complex story visually, with very little assistance from the spoken word, particularly in the first part. At times this feels refreshing, but there are occasions when some peculiar decisions by the characters rather have to be taken on trust. It also makes it tougher for us to work out what they’re really thinking and feeling – we can see that they’re distressed and depressed, but spending two hours looking at depressed people looking depressed isn’t particularly rewarding on an emotional level.

Arnold also takes some other creative liberties in her adaptation, making Heathcliff, previously a gypsy boy, black – and dispensing with the whole second volume of the novel, which follows the children of the main characters – making this, in a sense, just half an adaptation.

This observation provides an interesting critical talking point over the effectiveness of the ending – the tragic dramatic denouement that we’re treated to in the film was seen by Emily Brontë herself as the midway point that launched the second half, which will explain why the story might feel a little incomplete to some, while others, who experience closure, might wonder why she bothered writing the second volume at all.

For a film that is trying to break away from the mainstream, and plough its own furrow, it has an odd tendency, in the second half, to use rather too much visual exposition, reminding us what’s happened in the past to explain what’s going on in the present.

But on the whole, Arnold’s Wuthering Heights is a brave, bold and mature piece of film-making that is not easy to watch – either visually or emotionally.