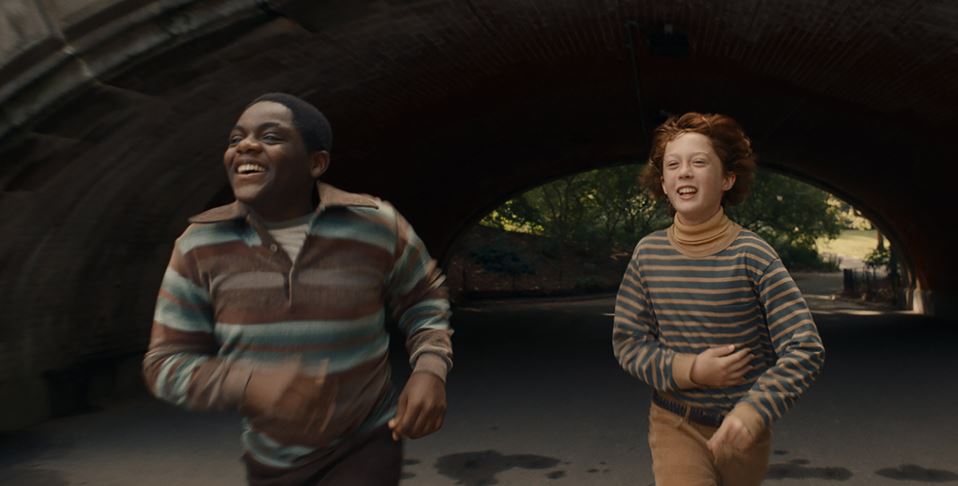 Paul Graff (Banks Repeta) doesn’t seem to be fitting in at his new high school. He’s quick to get on the wrong side of his teacher (Andrew Polk) and soon finds himself hanging out with Johnny Davis (Jaylin Webb), whose reputation as a delinquent precedes him, having been held back a year. In reality, Johnny’s only crimes are being underprivileged and misunderstood.

Paul isn’t much happier at home, where he’s overshadowed by his older brother Ted (Ryan Sell). His large New York Jewish family is always on hand to comment; it’s only really his grandfather Aaron (Sir Anthony Hopkins) who seems to understand him.

Respected pillars of the community, his father (Jeremy Strong) and mother (Anne Hathaway) become increasingly exasperated as Paul starts playing truant, smoking drugs in school and stealing – all with his only friend Johnny at his side.

Even a family tragedy can’t quell a growing rebellious streak, as he becomes evermore disenchanted with early 1980s America and what it’s doing to his community.

James Gray’s coming of age tale is based on his own childhood frustrations with racial prejudice and the class struggle of Reagan’s America.

There’s also more than a hint of Francois Truffaut’s 400 Blows as two young rebels rail against the authority of their school and parents to try to forge a better life.

But while its motives are genuine and heartfelt, the narrative is flat and unconvincing. Unlike Truffaut’s film, the protagonist is not from a working class family, with nothing – he’s the posh boy, looking down on his poor black friend from his comfortable liberal life with a supercilious disdain for the society that tries to put such distance between them. Apparently, he should be allowed to run riot because he doesn’t like the way the authorities treat his friend; that way anarchy lies.

There’s scope for an interesting piece of social drama that tackles these themes, but this isn’t it.

It’s unclear what would make this entitled brat satisfied, except, perhaps a communist government, but why take it out on his teacher and his family.

The idea of a Jewish boy railing against society’s treatment of his black friend was done far more imaginatively, sympathetically and usefully in Paul Morrison’s Wondrous Oblivion, in which Jewish immigrants in 1960s London were torn between siding with the new wave of black immigrants or the white neighbours who’d finally learned to accept them.

In Armageddon Time, most people in the audience would identify more with Paul’s parents and teacher than with a virtue signalling protagonist who’s, at best, naive and at worst, obnoxious.

It wastes some hugely impressive stars and while it tries to hitch its wagon to the anti-Reagan argument, it can’t reasonably be argued that an adolescent boy can be so disheartened with the threat of the incoming President launching a nuclear war that they can justify stealing a computer to raise the money to run-off to Florida, not least because the racial prejudice and class struggles evident in this film, of course, took place under President Carter.