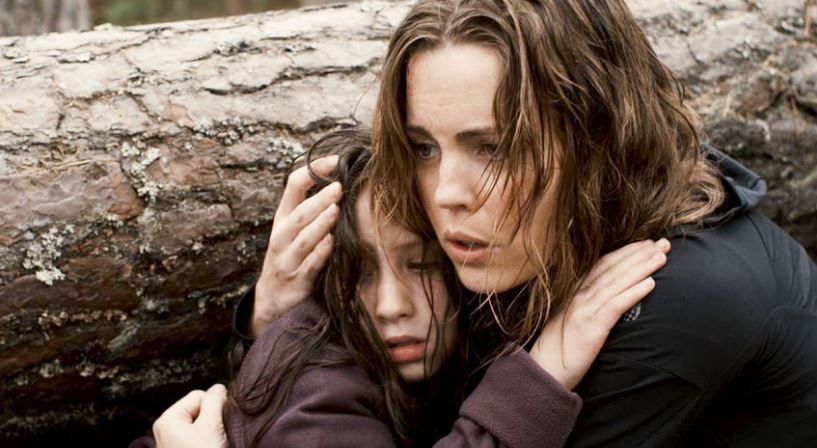 Rob (Alec Newman) is leading a team of experienced mountaineers on a training climb in the Scottish highlands, to prepare them for a far tougher expedition to the Alps.

Ed (Ed Speleers) has a little less experience than the others and Alison (Melissa George) is worried that he might hold the rest of the group back.

On day two of the trip, Ed nips into a wooded area for a toilet break, before the real climb begins, and hears a distant cry – something not expected in one of the most remote parts of the UK, so they decide to investigate.

They’re horrified to find a young girl, buried in a wooden crate with nothing but an air-pipe to keep her alive. To make things even more complicated, the girl doesn’t speak a word of English.

The day’s plans are thrown out of the window as the friends agree to get the girl back to civilisation.

The shortest route back to the nearest town is a steep drop down a cliff, which they couldn’t do with the girl, so the group splits, with the strongest climbers heading down to raise the alarm, while the others take the girl the longer way down – in the knowledge that whoever buried her could come back to find her at any time.

As the clock ticks, mysterious hunters emerge from the undergrowth and start shooting at the climbers as they try to get the girl to safety. Meanwhile, another team is on the way to seek the girl’s safe return to her father – a wealthy gangster from the Balkans.

It seems that some ruthless but opportunist kidnappers picked the wrong guy to mess with – and a group of well-meaning mountaineers had the great misfortune to get in the way.

This is a brave attempt at a low budget British thriller with a difference, but its problem is that it seems to be trying to do too much.

The film-makers appear to have made the most of their budget by getting as many people as possible up in the mountains, resulting in a somewhat overly complex plot, pulling together what could have been a number of better individual films.

One of these more modest, better films is the 2007 Spanish thriller, The King of the Mountain, in which a couple of hikers were stalked by unseen gunmen.

Another is last year’s Buried, in which Ryan Reynolds found himself trapped in a wooden crate and held for a ransom.

There’ve also been a number of other climbing thrillers – not least the based-on-real-life docudrama Touching The Void – and Australia’s Wolf Creek did a better job of wilderness stalking.

The “dying one-by-one” element is a staple of almost every horror these days – Final Destination 5 and Scream 4 in the past few months, to name just two.

Then, when the action descends on a one-cop Highlands town, hosting a Voodoo carnival that would put Live and Let Die to shame, with fireworks that would embarrass the London Eye’s New Year display, it all feels like the film-makers have lost the plot.

This is, sadly, a case of more is less. Despite plenty of well-paced action, some thrilling climbing, chilling accidents, ruthless hunting and brutal murders it feels awfully clichéd and we know we’ve seen it all before.

When a low budget film promotes itself on the back of one moderately familiar face – in this case, Melissa George – you know that she’ll be either the first or the last to be killed. You’ll also be unsurprised to find that she’s pretty much the only actor who’s really strong enough to carry the material.

The kidnappers, gangsters, mercenaries and cops are all movie archetypes whose roles are dictated more by the genre than the script.

A Lonely Place to Die has its moments; it’s not unexciting and it’ll have you biting your fingernails, but it’s desperately in need of direction. By having the courage of their convictions, the team could have saved some of the sequences for another film and delivered a more focused and rewarding thriller.

With so many people hanging around this Highland peak, it’s not a very lonely place to die at all.