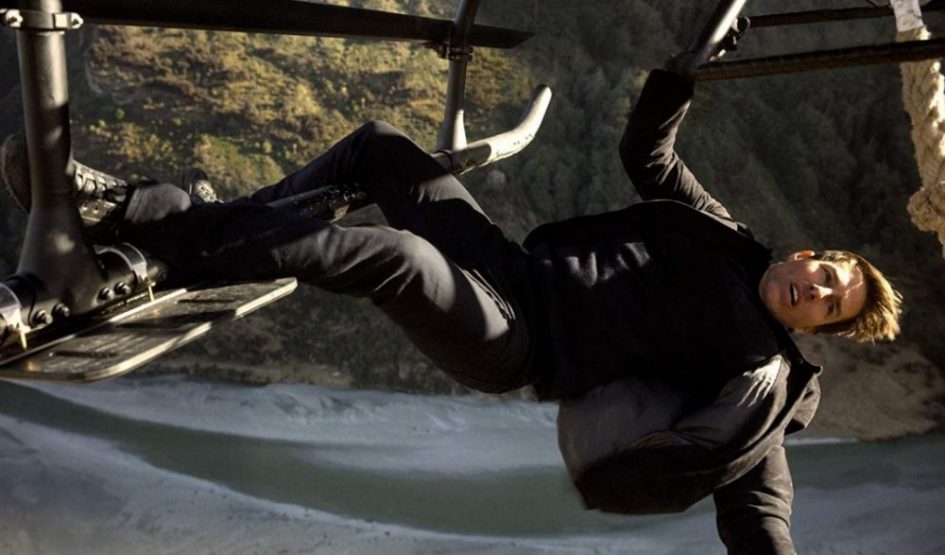 When a new self-destructing message is delivered to the Impossible Mission Force agent Ethan Hunt (Tom Cruise), he rounds up his two closest associates, Benji (Simon Pegg) and Luther (Ving Rhames) to save the world – again – this time from an unknown operative whose gang of anonymous terrorists, scattered around the world, is planning a devastating nuclear bomb attack.

Chasing one clue after another, from the heart of Paris and London to the remotest corner of Kashmir, the IMF are helped and hindered by a range of friends and foes – often finding it tough to work out one from the other, as plutonium and prisoners are used as currency in a battle for global supremacy.

We meet CIA Agent Walker (Henry Cavill) and an underworld broker known only as the White Widow (Vanessa Kirby) as we reacquaint ourselves with the former British agent Ilsa Faust (Rebecca Ferguson), the villainous Solomon Lane (Sean Harris) and the IMF boss Alan Hunley (Alec Baldwin).

But as he jumps from roof-top to roof-top, speeds around above and below city centres and dangles from helicopters in the mountains, Hunt never quite knows who he can trust.

“Why do you have to make it so f*cking complicated?” asks Henry Cavill’s exasperated Agent Walker of another character about two thirds of the way through the latest installment of Tom Cruise’s Mission: Impossible franchise, and many in the audience will be asking the same question.

As the plot flits around the world like a travel show, with most of the supporting characters oscillating between good guys and villains, without much logic or consistency, it’s a mission impossible in itself to work out who want to do what to whom and why.

But it doesn’t really matter – all you need to know is that someone wants to detonate a couple of nuclear bombs and Ethan Hunt is going to do his darndest to stop them – whoever they might be.

With exhilarating chases involving almost every kind of transport – from foot to motorbike, car, van, boat, helicopter and aeroplane – the locations and protagonists might change but the film is basically a string of loosely connected action sequences, constantly compelling as the director Christopher McQuarrie ratchets up the tension.

The choreography is as impressive for the stunts and fights as it is for the chases, as city streets and mountainsides are littered with all variety of vehicles, before the plot – such as it is – trundles onto the next venue to do the same again.

That story itself lacks a little originality, but by film 6 in the franchise, perhaps rather than struggling to come up with something new, they’re happy to settle for “international terrorists planning a nuclear attack” – that seems to over all bases without offending anyone. And “against the clock”

There’s little point trying to work out what’s going on, but there’s enough pleasure to be gained from sitting back and enjoying the action, even if some of the sequences don’t quite have the wow-factor of earlier installments, in which Cruise climbed onto moving aeroplanes and scaled the world’s tallest building, although the helicopter scene can’t be faulted and the roof-top chase is cleverly done – not least providing the moment the whole cinema will be waiting for; the infamous jump that led to the injury that held up production last summer, and when it arrives, expect a collective wince.

It’s also refreshing to see Cruise – finally showing his age a little in the face – content to share screen time with other big names; in recent outings, he’s not just been the only name over the title but the only name most people would even recognise, but somehow his films are more engaging when he’s prepared to join more of an ensemble cast.