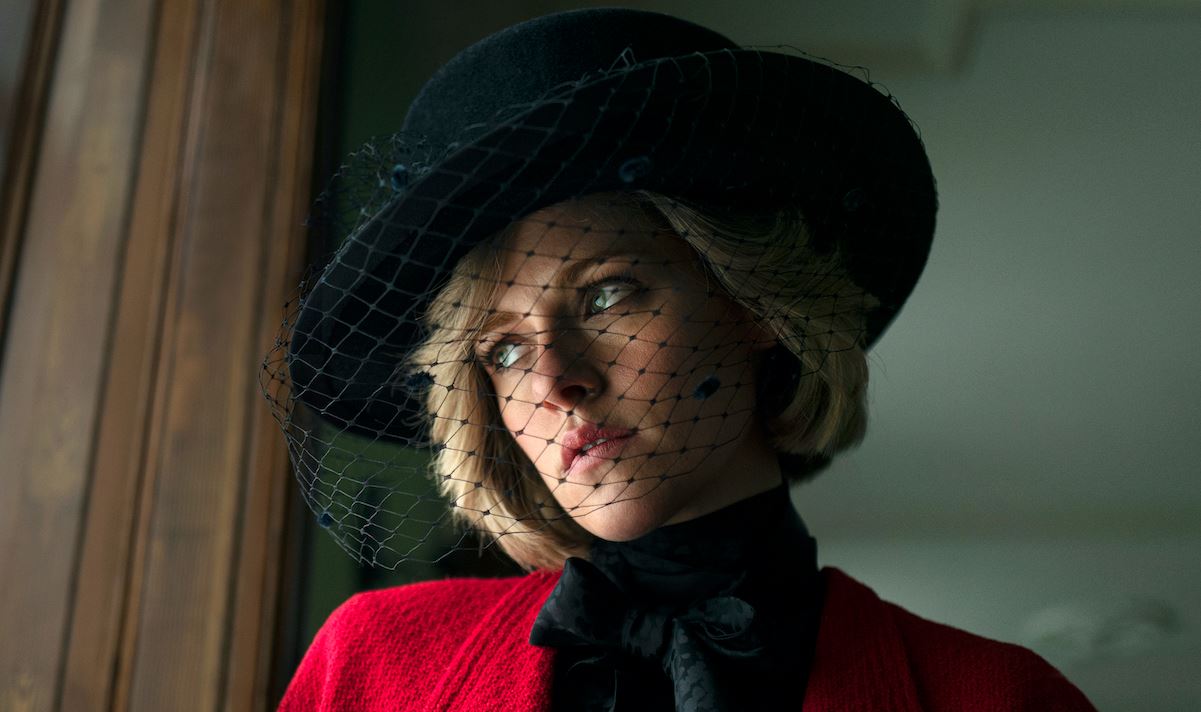 It’s Christmas Eve, 1991, and the Royal Family is gathering at the Queen’s Sandringham Estate in Norfolk. In a break with tradition – and not the only one, during the course of the festivities – the Queen herself is not the last to arrive, as Diana (Kirsten Stewart) has decided to drive herself and got lost on route.

When she finally turns up, she keeps the Queen and the rest of the family waiting even longer, because she’s reluctant to partake in the traditional pre-meal activity of being weighed, to ensure that guests have eaten enough over the course of the three-day celebration.

She rebels against the family’s tradition of opening its presents on Christmas Eve, rather than Christmas Day, she wears outfits designated for different occasions and refuses to eat properly – before creeping downstairs at night to binge cakes from the fridge.

All the while, the equerry (Timothy Spall) does his best to keep the proceedings on track, while Prince Charles (Jack Farthing) finds himself talking down to his wife, like a child, to try to keep her in line to save embarrassment – although who is embarrassing whom is open for debate.

Spencer paints a picture of a dysfunctional family, heading for a famous fracture, from the point of view of the woman who – in many people’s eyes – remains the People’s Princess.

At its heart is a David and Goliath battle between a monarchy that has endured for centuries and a lonely princess, desperate to break free from her shackles, regardless of what embarrassment it might cause the family.

It’s no surprise to anyone watching this that Princess Diana wasn’t happy in her marriage – or in the family or the destiny to which that marriage tied her. And given that the manifestation of her unhappiness is clearly fictional, it makes you wonder what the point of the film is.

Kristen Stewart’s performance is fascinating, if not always convincing. Her childish petulance is grating, making her a protagonist that many viewers will have trouble rooting for – regardless of their feelings for the Royal Family.

This is not a portrayal of an institution treating the outsider badly – she’s treated exactly like everyone else – with a dresser presenting her with her daily selection of outfits and a team of chefs preparing a range of meals for their collective enjoyment. She doesn’t approve of some of the events lined up for the entertainment of her sons, among others, so she does her best to sabotage the enjoyment of everyone else.

With the spotlight so firmly on Diana, almost every other character is so thinly drawn as to make you wonder how little impact they might have had on her anyway. Her only confidantes are her personal dresser (Sally Hawkins) and the head chef (Sean Harris) but apart from them, only Timothy Spall’s no-nonsense equerry – just trying to keep the programme running smoothly – has anything much to do.

Jack Farthing’s Prince Charles – who you might expect to have a prominent role as the antagonist – certainly lacks any love or emotion of any kind but in one of the few effective dramatic scenes – a discussion over the snooker table – the Royal position is laid out plainly and more convincingly than Diana’s own.

Another couple of one-on-one exchanges similarly lifted the tone; a heart-to-heart with the chef, and being put in her place by the equerry – but there’s an odd moment where she steals a brief moment with a Queen who seems to be offering sympathy and understanding, which is the exact opposite of what you might expect from a film like this.

Giving most of the cast almost nothing to do, except sit – in soft-focus – in the background means that one of the biggest stars in the location – not Sandringham as advertised but the grandeur of a moated palace in western Germany.

A full five inches shorter than Diana herself, only Kristen Stewart’s hairdressers, costumiers and voice coach help her present as the People’s Princess, with the mannered whispering and rolling eyeballs, although there’s no-one there likely to fall for her actions. Her height – especially in scenes with her sons – meant she lacked the screen presence of one of the most famous women in modern history.

Rather than the 5 star performance in a 2 star film – it’s more of a 2-star performance pulling down a 3-star film a little, as her representation of this familiar, tragic figure verges on the pastiche and has the counter-intuitive result of making us sympathise less with her than with her supposed tormentors.

In a sense, the real villains are not the traditionalists within the monarchy but her own family – the Spencers – who married her off as a teenager into the unbreakable, unshakable institution.

Pablo Larraín – the Chilean director who did something similar with the life of Jackie Kennedy in the eponymous Jackie – provides a handful of inspired moments of drama that stand out from the flatness, such as a jewellery incident over dinner, her binging in the refrigerator at night and just a little self-harm and one of the more memorable moments puts a dramatic spin on Blazing Saddles, as some searing string music, highlight an impending emotional outburst, turns out to be coming from the string-quartet in the very same room.