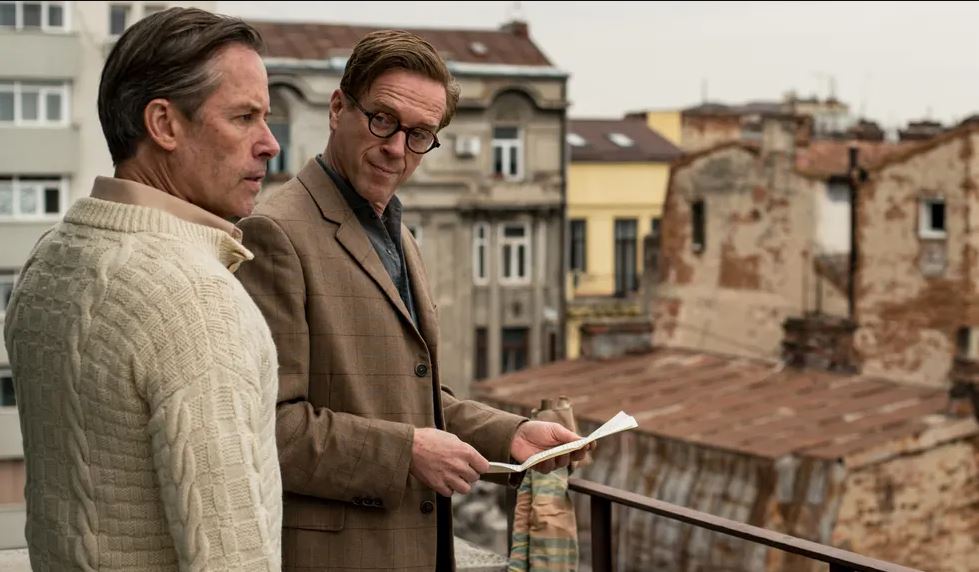 In the early 1960s, MI6 sends intelligence officer Nicholas Elliot (Damian Lewis) to Beirut to try to get his close friend, Kim Philby (Guy Pearce), to sign a written confession to having spied for the Soviet Union since the Second World War.

The interrogation takes place over a number of days – and before it’s over, Philby manages to give Elliot the slip and defects to Russia.

Back in London, the head of MI5 Sir Roger Ellis (Adrian Edmondson) sends in Lily Thomas (Anna Maxwell Martin) to question Elliot, to establish whether he was given the slip by Philby or actively helped him escape to Moscow.

ITV’s six-part spy drama is told through a series of interrogations and flashbacks, a fractured time-line making an already nuanced and complex narrative even harder to follow.

Over the course of the series – based on Ben Macintyre’s book of the same name – the audience is gets to take a peek under the bonnet of the world of post-war spying – and joins MI5’s Lily Thomas on a journey of discovery as she tries to work out whether Nicholas Elliot can still be trusted.

Guy Pearce displays the kind of charm that would clearly have been needed to work both sides for so long. Damian Lewis effectively keeps the audience guessing. Anna Maxwell Martin – whose character is billed as a composite to contrast with the privileged white men at the top of the security and intelligence services – doesn’t feel entirely comfortable with her Durham accent. And for many, who still think of Adrian Edmondson as Vyvyan from The Young Ones, his ambiguous turn as the MI5 chief will be surprisingly chilling.

As the story unfolds, enemies are drawn together and friends are pushed apart as new leads – and leaks – are discovered. Suspicion lies everywhere – and it seems that it was as hard for them to trust their colleagues as it was to trust the Soviets.

A Spy Among Friends explores the murky world of spies and studies the notion of friendship – as the facts slowly emerge.

Much of it is about nuance – on the surface, it’s clear to see just how treacherous it was to be spying for Moscow – but it was equally clear that during the Second World War, the Soviet Union were on our side – so there’s a sense that it could have been difficult to establish when the cooperation had to stop.

It also certainly makes you wonder why anyone from the West would have chosen the Soviet lifestyle – whatever their political beliefs.

It’s spying – but it’s not James Bond – there are more words than bullets in this intricately structured drama and some might find there’s a bit too much treacle to wade through. And it’s almost a shame that after six hours of concentrating hard and trying to piece together the puzzle, it’s left to a series of captions to let the audience know what eventually happened.