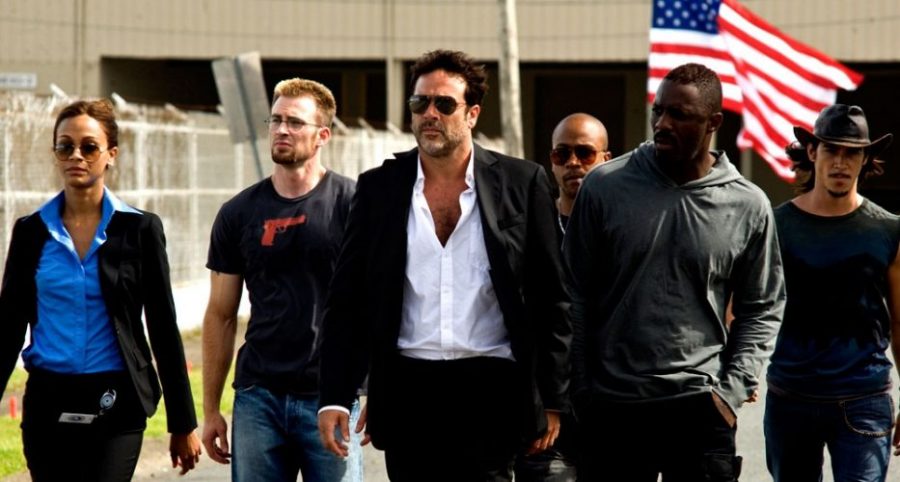 Colonel Clay (Jeffrey Dean Morgan) is leading his team of commandos on a mission to kill a ruthless Bolivian drugs baron when he realises they’ve been set up.

Dozens of children are killed and his men get the blame. The rogue CIA operative who framed them, Max (Jason Patric), then blows up their helicopter to cover his tracks. But they’re not on board.

With everyone thinking they’re dead – and child murderers – they need to find a way to slip back into the US and clear their names.

Muscle-bound Aisha (Zoë Saldaña) has her own reasons for wanting to get rid of Max, so she seduces Clay in a bar and persuades him to join forces; they help her get Max and she smuggles them back into the US.

But as the team get closer to pinpointing Max – who, by now is planning to destroy the world with environmentally friendly weapons of mass destruction (really!) – the loyalties within them are stretched to the limit. Should they trust Aisha? Can they still trust each other?

A group of heavily-armed ex-military men, working beneath the radar, striking deals with people who need their help – sounds very much like the 1980s TV hit The A-Team, but we all know that’s not hitting our screens for another couple of months, so this is – in truth – more of a B-Team.

It’s an exciting, fast-paced, action adventure, that’ll provide an hour and a half of bright and shiny entertainment.

In truth, the story is a bit all over the place; the twists, turns and double-dealings are either too obvious or unbelievable. And while the main characters are nicely drawn – with some humour from Chris Evans and cheeky (if unconvincing) romance between Morgan and Saldaña, there are a few too many rent-a-crowd support characters who serve little purpose on screen other than being bullet-fodder.

The Losers is the latest graphic-novel adaptation, although unlike others in this field – such as Sin City or Watchmen – there’s little here to reflect its heritage other than the literary style chapter headings.

It’s violent, but well choreographed – both in terms of hand-to-hand combat and big set-piece stunts.

The Losers is a mindless, but harmless piece of competent, brisk entertainment that will certainly serve as an appetiser for its higher profile big brother, this summer’s 1980s throwback blockbuster.