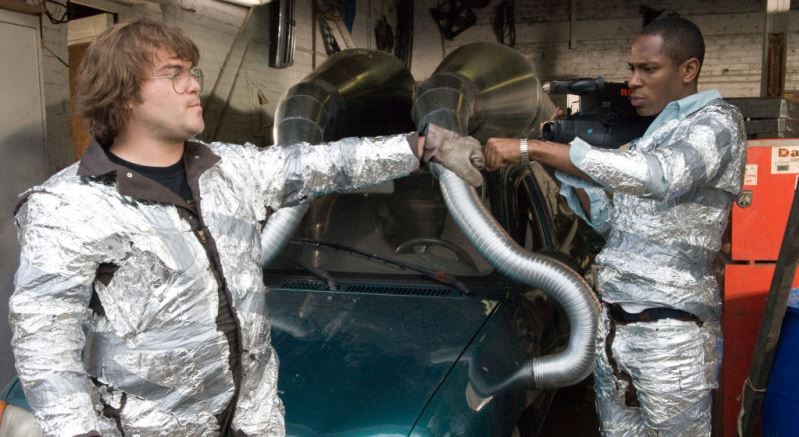 When Mr Fletcher (Danny Glover) leaves New York for a few days, he leaves Mike (Mos Def) in charge of his video-rental store — the last VHS place in town.

One night after work, Mike’s best friend Jerry (Jack Black) takes him on a raid to sabotage a local electricity generating plant that he believes is bad for the area.

Things don’t go to plan, and Jerry ends up with thousands of volts shooting through him.

Don’t worry – it doesn’t hurt him – this is a Michel Gondry comedy, bearing which in mind, what happens next probably would sound rather mundane.

Now, when Jerry walks down the aisles in the store, unbeknownst to him, his electrically-generated magnetic field erases all the VHS cassettes. This is first brought to their attention when a disappointed customer returns a blank Ghostbusters tape.

Mike will be in big trouble when Mr Fletcher gets back if all the cassettes have been wiped, so what can they do? Shoot their own versions of the films, of course. And with the clientele living in their locale, such as the elderly Miss Falewicz (Mia Farrow), maybe they won’t even realise that the real Robocop was more than twenty minutes long with slightly grander effects.

The concept, as you’d expect from the man who brought you Eternal Sunshine and the Science of Sleep, is almost too outlandish to pay any attention to at all – how much more random a plot could you get?

But for fans of Jack Black at his zaniest – and movie geeks of all ages – Gondry’s imagination has conjured up another winning formula – although it’s undoubtedly an acquired taste.

It’s not entirely clear who Gondry is laughing at here – and once we get the idea of what’s going on, there’s not really anywhere to take it.

If you can spot the references, there’ll be lots of laughs to be had along the way, but there is a sense in which the film is little more than watching a bunch of kids shooting their own versions of the most nerdy films from their childhood. At times, it feels like you’re watching a string of spoof videos on YouTube.

It’s fun – for a while – but ultimately rather dull and unsatisfying. It’s childishly imaginative – but it’s a single gag, dragged out too long.

While Gondry’s previous films have been as mentally challenging as they were cinematically interesting, this time, he doesn’t tick as many boxes.

If you’re kind, you might rewind, but you won’t be reaching for that play button again in a hurry.