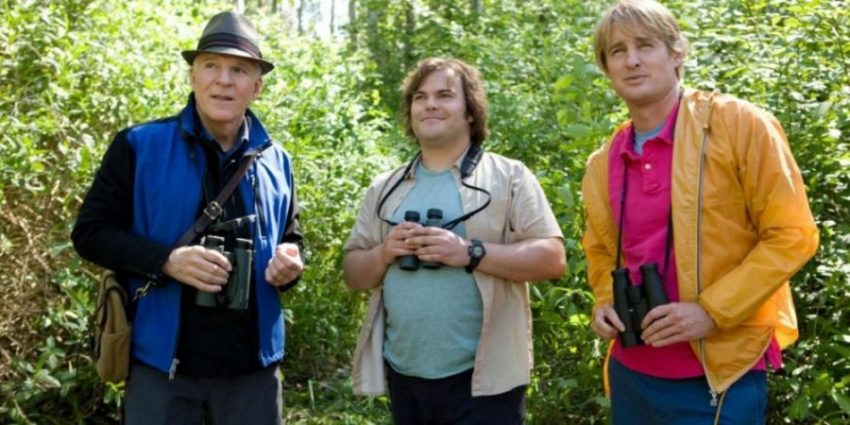 American bird-watchers – or birders, as they prefer to be called – indulge in what they call the “Big Year” – a competition to see who can spot the most species of birds during a calendar year.

This means a lot of travel – a lot of money – and a lot of time away from the family.

Kenny (Owen Wilson) is the reigning champion and his wife Jessica (Rosamund Pike), a bit of a bird-widow, is keen for him not to bother defending his title, so that he can stay at home and start a family.

Successful businessman Stu (Steve Martin) is just about ready to wind down and retire, but gives himself a year off to spot birds, to decide how he feels about leaving the office.

Then there’s Brad (Jack Black), a divorced IT guy who still lives at home with doting Mum Brenda (Dianne Wiest) and a highly judgemental and disapproving father Raymond (Brian Dennehy).

The first thing we learn about these birders is how competitive they are; the lengths they will go to to win. The second thing is that one of their chief tactics is not to tell anyone else they’re doing a “Big Year,” so that others don’t step up their game to meet your challenge.

As the three keep following each other around the country and happily – or sadly – leave elements of their everyday lives behind, it soon becomes clear that they’re the three front-runners for the title.

Friendships and emnities are born and die as they fly around the 50 states after the birds, learning as much about each other and themselves as they do about their avian targets.

Steve Martin, Jack Black and Owen Wilson: three of modern cinema’s greatest comic actors, having brought to the screen films including The Jerk, The Man With Two Brains, All of Me; School of Rock, Shallow Hall, High Fidelity; Zoolander, Shanghai Noon and the Wedding Crashers – to name but 9.

So who on earth came up with the great idea of putting the three together and making a film which doesn’t even try to be a comedy? There’s plenty of self-discovery, belated coming-of-age, family tensions, but almost no attempt to raise a laugh.

They steer clear of dramatic potential and there’s no sign of the kind of exciting race-to-the-finish you’d expect from something approximating to, if not a sports movie, a competition film.

All three main characters are likeable enough, but Steve Martin is a little too normal to be interesting, while Jack Black and Owen Wilson are a touch too close to caricature for anything that happens in their lives to be taken seriously.

The Big Year falls uncomfortably between comedy and drama – being neither funny nor gripping – but worse, missing every opportunity to be either.

Some highly talented supporting players – such as Anjelica Huston and Dianne Wiest – are not used to anything like their full potential.

The Big Year has good intentions, but is neither interesting nor profound; watching people getting their priorities straight, following their dreams or realising that what they thought their ambitions were turn out not to be what will make them truly happy are about as derivative in terms of theme as any film has got.

It’s hard to hate this film, as everyone is so nice – and even those characters who seem selfish are good deep down beneath the surface – but there’s just nothing to get your teeth into. Perhaps, with that being the case, it’s the kind of harmless film you can enjoy with your grandparents.

Sadly, to recall Steve Buscemi’s oft-quoted phrase about tips for waiters in Reservoir Dogs, The Big Year is “for the birds.”