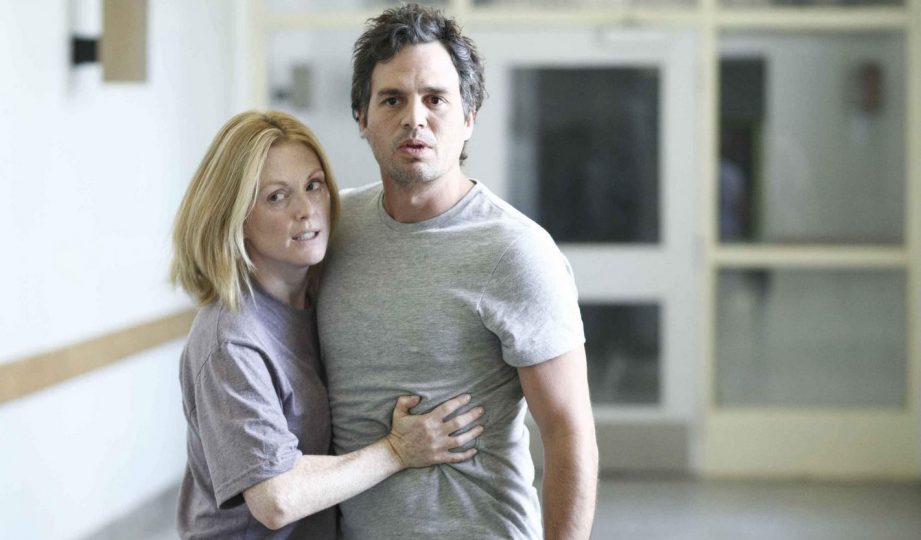 When a Japanese man suddenly goes blind at the traffic lights, a kindly passer-by helps him home, before speeding off in his car.

The Japanese man goes to see an ophthalmologist (Mark Ruffalo) who has no idea what has caused his blindness. The following day, the ophthalmologist himself loses his sight.

Before long, the mysterious infection spreads across the unnamed cosmopolitan city in this unnamed country and by the dozen, sufferers are crammed into a disused government facility in a desperate attempt to contain it.

The ophthalmologist’s wife (Julianne Moore) goes with him, although she seems to be immune from the bug. She tries to keep this secret for as long as she can.

With no attempt from the authorities to help them, they victims organise themselves into gangs and from this point onwards, it’s very much survival for the fittest.

Essentially, the ophthalmologist leads the good guys, while a gun-slinging Latino (Gael García Bernal), starts to use force to ration the food supplies, with his underlings demanding money, jewellery or even women from their rivals.

There’s no question that there is an interesting idea buried in the novel that forms the source material for this film and Fernando Meirelles – best known for City of God and The Constant Gardener – once again delivers a visually remarkable piece of work.

He uses gorgeous reflections, stunning sets and mellifluous camera movements in the early stages of the film, to be replaced by the stark sets of the institution and a post-apocalyptic city.

But as a piece of storytelling, it is seriously lacking. It’s a good example of a film which puts style way ahead of substance – true substance – Meirelles clearly thinks his film has more substance than it does.

Why do patients suddenly stop arriving at the institution? Why do the authorities stop guarding them? Why is no-one actually trying to find a cure or even treat them – from the very first moment?

Meirelles makes no attempt to explain what the affliction might be – or why Julianne Moore’s character wasn’t affected – and that being the case, why she kept her immunity secret for so long, when she could have prevented so much misery had she come clean.

We don’t get to know enough about enough of the characters – and whether they are good or bad people is largely down to which ward they happen to end up in, although there is arguably a wider truth here.

And without giving away the ending, the dénouement is similarly lacking in any dramatic coherence, which makes the film seem more like a Stephen King/Michael Crichton-style supernatural thriller, than a grown-up study of the break-down of society, grounded in any kind of reality.

It’s a “futility film” – where nothing any character does actually makes any difference to the outcome – so the film’s not about how they diagnose the problem and fix it, it’s just about how they survive while they’re waiting. This rather makes it seem like only half the film it promises to be – or should be.

All of which is clearly intentional – the film-makers will know they haven’t answered any of these questions, presumably feeling that it’s more interesting to present the viewers with an enigma than it is to spell it all out for us in black and white.

But while societal breakdown and its shocking consequences are presented in a moving, dramatic and visually stunning way, with little context – and ultimately no point – the film fails to meet the high expectations its cast and crew would lead you to have.