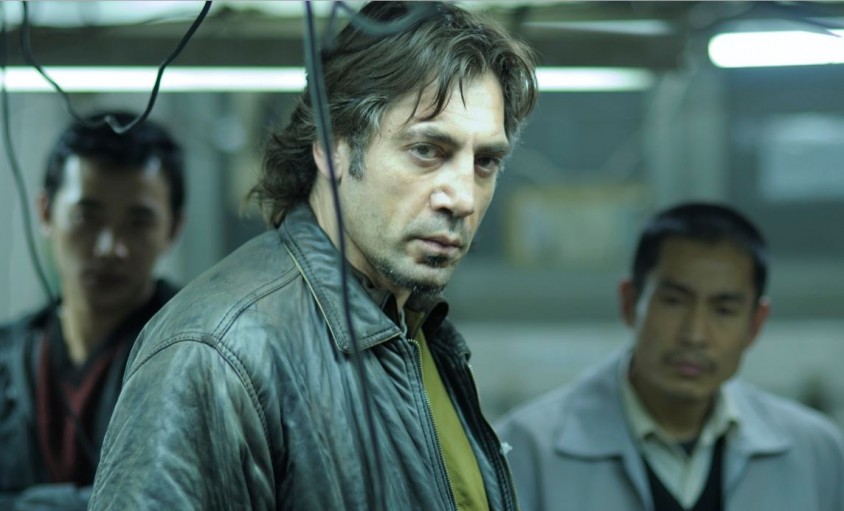 Uxbal (Javier Bardem) exists on the edge of Barcelona’s underworld. His honest crust comes from talking to the bodies of the recently dead to get messages to pass on to their bereaved relatives.

Under the table, he’s also taking kickbacks for finding illegal immigrants to work in the Chinese sweat-shops and building sites, while he’s paying off the cops to allow African drug dealers to peddle their wares on the streets.

But while he’s clearly a dodgy character and not, on the surface, the kind of guy most of us would invite round for tea, when we see him with his kids, he’s the perfect father – protecting them from their alcoholic mother, (Maricel Álvarez), estranged, maybe, but she still probably shouldn’t be messing around with Uxbal’s brother.

He’s also protective of one of the Chinese immigrants and when one of the African’s is killed, Uxbal takes in his widow and child.

To add to his internal conflict and turmoil, as the film begins, Uxbal is diagnosed with advanced terminal prostate cancer, but whether it’s through pride or the fear of worrying those he loves, he keeps this news close to his chest.

Rarely has any film had such an ironic title – nothing about this is beautiful, except perhaps the photography.

From Uxbal’s run-down apartment to the basement hovel where the Chinese immigrants are stored like sardines to the streets, littered with trash – both human and otherwise – everything in Biutful is ugly.

Even the god-like Bardem is looking below par, as those around him start to die and his cancer starts to kill him.

His performance – unusually, a foreign language role earning a Best Actor Oscar nomination – is impressive, but uneven. He’s either good (with his kids) or bad (with the gangmasters) – very black and white – but no grey.

The film is far too long, slow and overwrought.

As with his previous works – including Amores Perros and Babel – Alejandro González Iñárritu knows where to point the camera and how to get the best out of his actors, but taking over writing duties from his regular collaborator Guillermo Arriaga leaves him with a less assured script, with less direction and purpose.

For anyone other than fans of miserablist movies, whether it’s themes, performances or visuals, there’s much to admire here, but very little to like.