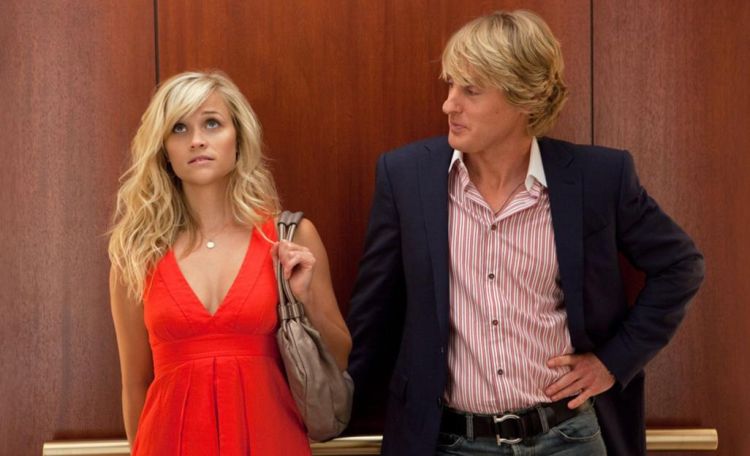 When professional softball player Lisa (Reese Witherspoon) is dropped from the team, simply for being over 30, she throws herself into trying to find a guy.

She takes a rather odd call from a rather morose young executive George (Paul Rudd) – a friend of a friend who’s been given her number – who proceeds to tell her that he’s not actually available, but he thought he ought to call her anyway, in case she’s expecting his call and thinks it’s rude that he hasn’t been in touch.

But accounting irregularities at his firm – owned by his dad (Jack Nicholson) – see George suspended from the company and his fiancée (Shelley Conn) wanting to take a break until he’s in the clear.

So now, he’s in the clear to call Lisa again. By now, though, she’s dating major league baseball pitcher Matty (Owen Wilson) – a fun-loving, rather too open-hearted jock, who’s ready to grow up for Lisa, but has no idea how to do it.

Lisa now finds herself torn between the wealth and fame that come from dating a loving major league sportsman – the life she’s had taken away from her – and the boredom that would come from dating a miserable loser of a businessman, who seems to attract bad luck like dung attracts flies.

Everything about this film – apart from its formulaic structure – tells you that Lisa should end up with Matty – they’re sporty, they’re shallow, they’re blonde and beautiful. Why any woman would want to go so close to George as to be able to prod him with a barge pole is beyond me. Paul Rudd just doesn’t have what it takes to be a leading man. He never has. He’s a great sidekick, but he can’t steer a film. Rudd is rudderless. When will producers realise this?

This is one of this film’s many weaknesses. You’re not rooting for the main character. He’s empty and charmless. The love-rival, however, is more down-to-earth, natural, believable and loving – shallow, yes, but keen to learn how to change. And funny. That this film gets any stars at all is down to Owen Wilson.

Matty is also the only funny character in the film – the only one who even deserves to be in a romantic comedy.

Coming from writer-director James L Brooks – the creator of such rom-com gems as Broadcast News and As Good As It Gets, with two Oscars and fourteen nominations between them – you could be forgiven for getting excited about this, but it fails on all counts.

It’s not just that the romance pairs the wrong characters and the comedy almost doesn’t exist at all. The main characters aren’t likeable and the film sets itself up to be a profound analysis of how you know when you’re in love, but fails to address the issue in a mature and adult way.

It asks the question, but doesn’t truly attempt to answer it in a way any viewer could identify with.

This film is certainly not as good as it gets. I mean, the title doesn’t even have a question mark!