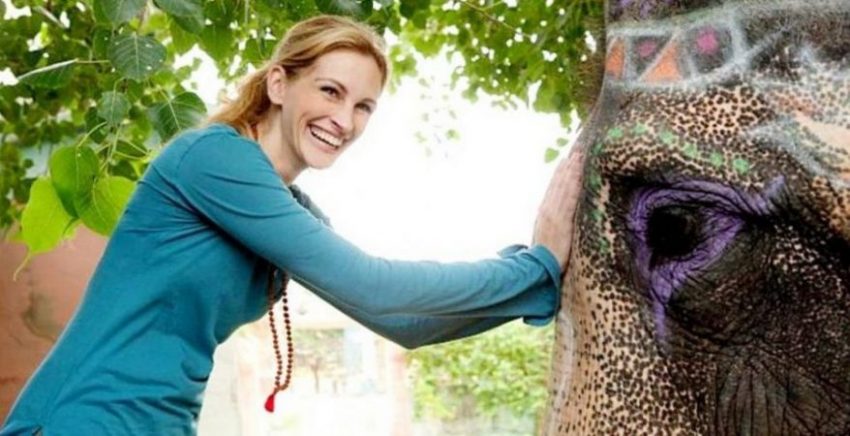 Liz Gilbert (Julia Roberts) is a New York author going through a bit of an early mid-life crisis.

Despite having a wealthy, handsome, loving husband Stephen (Billy Crudup), with whom she shares a beautiful Manhattan apartment and a life full of parties and theatre visits, she feels there’s more to life – she just doesn’t know what it is.

When Stephen announces his wish to return to university to better himself, she realises that means she’ll have to work harder and that’s not something that she wants.

So – what can she do to find herself and improve herself?

Leave her husband and shack up with an actor in a play she’s written, apparently. David (James Franco) is particularly comfortable with himself thanks to his Hindu guru. But he’s less comfortable with her; “Don’t you think it would be good to make me miss you?” he asks her, one day, as she tries to put her arm around him in bed. This clearly isn’t working either, so there’s only one thing for it.

Take a year off work and travel. Go to Italy to “eat.” Go to India to “pray” to David’s guru. Go to Indonesia to “love.”

It might be Julia Roberts’ answer to self-fulfilment, but eating and loving, at least, would certainly feature pretty highly on most people’s “top three ways to a happy life” list.

But eating a bowl of pasta she could’ve done in Manhattan. Praying to David’s guru she could’ve done in Manhattan too – as it happens, she arrives at the ashram in India to find that the guru is indeed in New York! There are surely enough men in Manhattan for her to love too – she rejects two at the start of the film and there are certainly more fish in the sea. She clearly couldn’t have known that she’d have met Mr Perfect (Javier Bardem), a hunky Brazilian single father, in Bali of all places.

Her plan is based on hokum; in the opening scene, she’s interviewing a Balinese mystic who tells her fortune – but one thing is true; people desperate for direction will listen to the first thing that points them in a particular direction.

This is one of those films where nothing actually happens for the reason it’s meant to. Yes, by the end of the film, she’s happy – but it wasn’t eating in Italy, praying in India and loving in Indonesia that made her happy in particular – she didn’t find herself – she just had a good holiday, which would make anyone feel better.

We don’t really see her develop and grow. Her character lacks any conviction – after learning of the importance of silence at the ashram, she excitedly takes up the challenge, only to jack it in as soon as something better comes along. What did she learn from that? How did that help her self-development?

Much of the plot is inconsistent and incoherent anyway. A big “I don’t have to love you to prove I love myself” speech in the final reel loses its impact when it turns out that she does love him, which confirms to her that she loves herself.

And why do we even care about her anyway? She’s a rich, spoilt, writer of little repute, who rejects a loving husband because of his admirable wish to better himself. But to what end? So that she can better herself. How selfish and self-important is that?

Oddly, no-one else in the film seems to see her as a supercilious and needy moaner – she manages to pick up close and supportive friends wherever she goes (but she can’t back home?) including a horribly wasted Richard Jenkins, who takes an inexplicable non-sexual like to her when he meets her at the ashram. Thanks to his teeth-grindingly embarrassing nick-name for her and an anti-climactic catharsis of a monologue, he becomes almost as irritating a character as her.

Maybe the title itself is enough to tell you everything you’re going to get for the next two hours and twenty minutes – an inexcusably overdone duration, making the film feel as long as Julia Roberts’ year off.

So, you’d get as much from looking at the poster as you would from watching the film – but without the irritants and you’d save more than two hours of your life.

Don’t try to kid the audience into thinking that showing us some pretty people in some pretty places will enthral audiences who crave meaning in their own lives. They certainly won’t find it here. The film is bursting with an unjustified sense of its own self-importance.

The film lacks charm, humour and any genuine sense of meaning and when, on a couple of occasions, Julia Roberts gets out her famous Pretty Woman laugh, you’ll want to eat your fist, pray it’ll be over soon and love the idea that each sweet you eat and each prayer you issue brings you closer to home time.