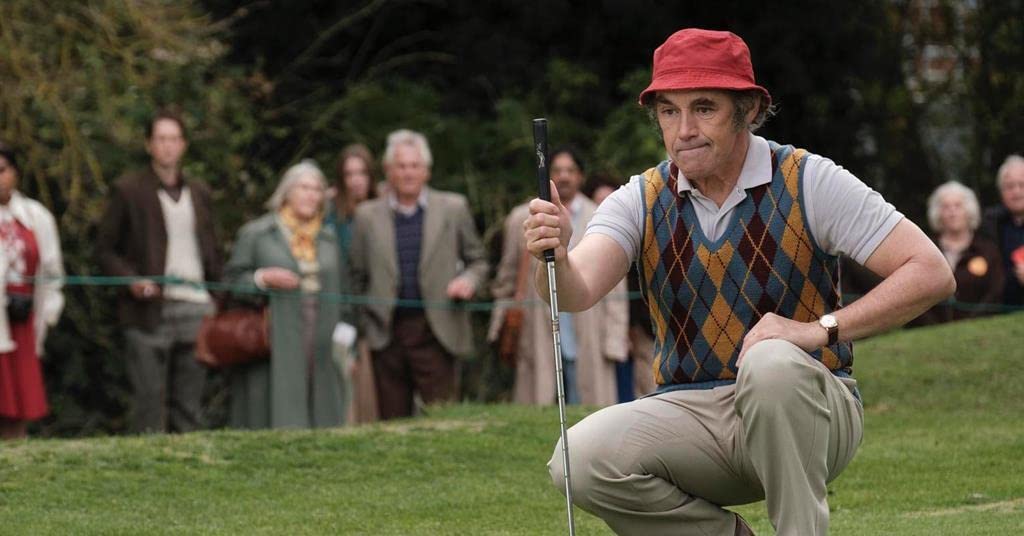 It’s the mid-1970s and Maurice Flitcroft (Sir Mark Rylance) is a crane operator at the docks in Barrow-in-Furness in Cumbria. His eldest son Mike (Jake Davies) is a junior manager at the docks and tips his Dad off about upcoming job losses.

Looking around for other opportunities, Maurice stumbles across something on TV that piques his interest; golf – or more specifically, the sport’s most prestigious competition, The Open.

Never having picked up a golf-club in his life, Maurice sets his sights on entering the tournament the following year. Discovering that amateurs need a handicap to take part, he puts himself down as a professional on the application form – and hey presto, he’s in.

When the head of the competition (Rhys Ifans) realises that Maurice is on his way to the highest ever score for a round at The Open, he tries to persuade him to quit, to save the organisers the embarrassment, but the imposter is enjoying his moment in the limelight and refuses to give up.

After the competition, the organisers ban him from ever entering The Open again – but his wife Jean (Sally Hawkins) comes up with an ingenious plan that enables him to take part again and again.

Astonishingly based on real life – with photos over the closing credits to prove it – this quirky British comedy breaks the mould of the Hollywood underdog story; rather than being about an unknown coming out of nowhere to win, he loses – and loses spectacularly – and is proud of it.

Sir Mark Rylance plays the awkward, plucky loser sensitively, without making fun of someone the rest of the world is laughing at, not with. There’s a fine line between naivety and nobility and he walks it with confidence. With Sally Hawkins’s Jean at his side, Maurice feels like he can do anything – be anyone. Just taking part is winning for him – and how he wins and wins and wins.

The notion of a beginner at anything playing alongside those at the very top of their game is so unlikely that you even have some sympathy for the snobs running the tournament and Maurice’s bosses at the dockyard, who find it hilarious to watch such a laughing-stock – until they realise he works for them.

The film feels a little uneven, having a strong first hour or so and sagging a bit in the middle but then rising to a manipulatively emotional crescendo that will bring – if not tears to the eyes – a frog to the throat of all but the most cynical viewers.

The Phantom of the Open is based on a book of the same name by the comic Simon Farnaby, who also wrote the screenplay and takes on the role of one of the bemused professional golfers, accompanying Maurice Flitcroft as he earned himself the moniker of “the world’s worst golfer.”

It’s sweet and funny, surreal and heart-warming and comes straight from the seemingly endless library of “you couldn’t make it up” stories.

It works just as well as a charming, low-key comedy as it does as a satire, with the working classes cocking a snook at the pompous elite.

Most importantly – it’s a lot of fun – for many viewers, more fun than a round of golf.