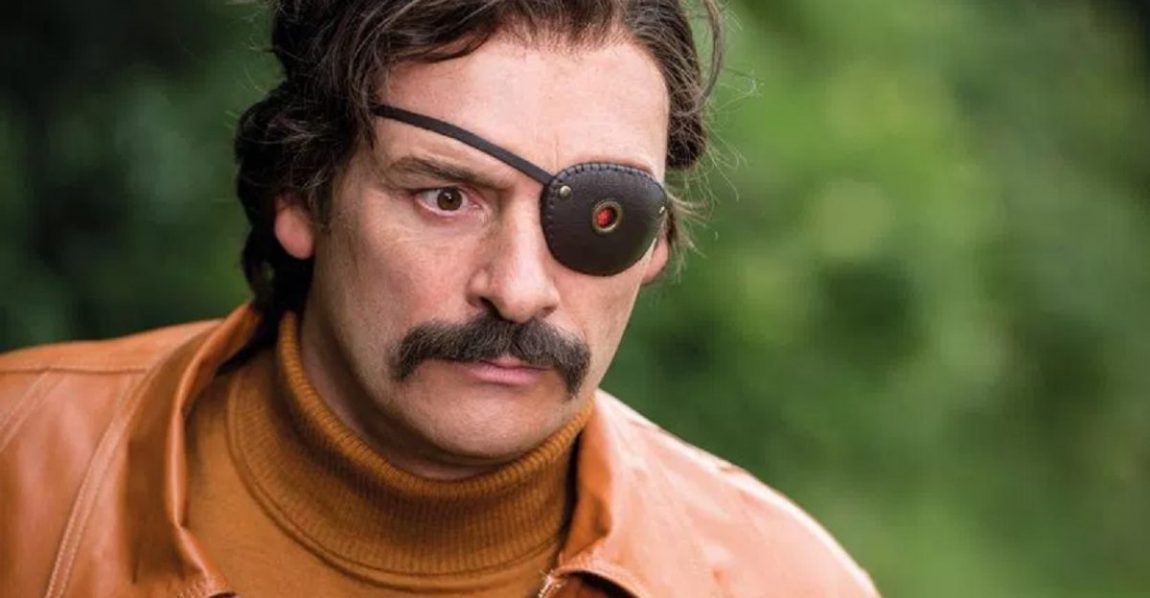 In the 1980s, actor Richard Thorncroft (Julian Barratt) played the popular Isle of Man TV detective Mindhorn, whose particular skill was to use his bionic eye to be able to see through the lies of the criminals he caught. After he quit the show, he offended everyone on the island with an excoriating interview on Wogan – but what did he care? He was off to Hollywood to make it big.

Twenty five years later, we discover that he didn’t make it big after all. He’s now living in a bedsit in Walthamstow, an overweight, bald, has-been actor, lurching from one embarrassing audition to the next, not being able to get any role meatier than a commercial for orthopaedic socks. Worse still, everyone else involved in his show went on to bigger and better things – even his stunt double Clive (Simon Farnaby).

Meanwhile, back on the Isle of Man, where his former on-screen-off-screen lover Pat (Essie Davis) is a top TV journalist and co-star Peter Eastman (Steve Coogan) now seems to own half of the island after a successful spin-off show, the local police are struggling to solve a murder; their chief suspect Paul (Russell Tovey) is somewhat stuck in the past and the only police officer he’ll agree to talk to is Mindhorn.

For the police, their only hope is to persuade Richard to return to the one role that has ever been a success for him. For Richard, this could give him the publicity he needs to get his career back on track – and perhaps to win back the only woman he ever really loved.

So much of this is familiar – in no particular order, the has-been trying to relive his glory days; the fallen star-turned-loser desperate to prove himself; the outsider trying to come back in from the cold; crime and corruption in a peaceful community; a murder suspect with mental health issues – big-name cameos; nostalgic pastiche; an actor portraying his character in real-life; obsession with celebrity; celebrities living in their own world; brutal schadenfreude – but no amount of familiarity makes it any less fun.

This is a tough film for a reviewer – it’s hugely enjoyable, but that doesn’t make it a good film by any stretch of the imagination – if anything, it’s a good sketch that’s been stretched to feature length.

There are moments of slapstick humour, satire, surrealism and parody that will raise out-loud belly-laughs, while the narrative at its core is necessarily pedestrian and as predictable as it is unbelievable, with characters ranging from the arch grotesque to straight-characters, so banal as to be boring. Julian Barratt gets the tone right for Richard Thorncroft, wearing his exasperation with life as well as he does his 80s wardrobe, while Simon Farnaby’s stunt-double is delightfully cheeky and abrasive, if just a little contrived.

With elements of The Three Amigos and Galaxy Quest, David Brent and Alan Partridge (Steve Coogan is an executive producer and appears in a supporting role), Misery, the Six Million Dollar Man and, most obviously, Bergerac – Mindhorn is bursting to the brim with cultural references and how much you enjoy – or understand – the film will be directly proportional to the number of references you recognise.

For any Brits like stars and writers Barratt and Farnaby, born in the late 60s  and early 70s, growing up in the 80s, watching Bergerac and Wogan and listening to cheesy 80s pop music, enjoying them at the time and then feeling a little bit embarrassed about it in retrospect, this will tick many boxes – add a few more for fans of the surrealism of The Mighty Boosh, which gave the pair a comedy-kick into the public arena, and you’ve got your target audience, who’ll rejoice in an hour and a half of nodding, recollection and – most importantly – hearty giggling.

Anyone outside that cohort might be somewhat perplexed by most of what will greet them, despite the evident fun that the pair are clearly having, every moment they spend on screen, either together or apart. This could render this most British of films, with the support of the BBC, BFI and Sir Ridley Scott, among others, peculiarly unable to travel.

As films go, Mindhorn could comfortably by described as “marmite,” being loved by some and loathed by others; my own star-rating, perhaps, betrays my nationality, age and childhood TV viewing habits.

It seems churlish to criticise such an entertaining film for being narratively and thematically uneven; the plot, the screenplay and the direction all have sublime moments of comic genius – the purity and simplicity of the some of the gags are a joy to behold, but similarly, there are ridiculous moments of madness. Anyone who’s not with the programme might find much of it too derivative, knowing and childish. Mindhorn could be the best piece of rubbish of the year or the worst piece of inspired comic creativity.

Although this is his debut feature, director Sean Foley is clearly comfortable with comedy, having come from a theatre background, where his most recent production came off stage only a week ago; The Painkiller, starring Sir Kenneth Branagh, who makes an entertaining cameo in this film, as himself, as one of the foils for Barratt’s often uncomfortable humour. Happily, Mindhorn – with its Manx vistas – feels more cinematic than it has any right to. And with so many films being shot on the Isle of Man because of the tax benefits, it makes a pleasant change to see a film that’s actually set there too.