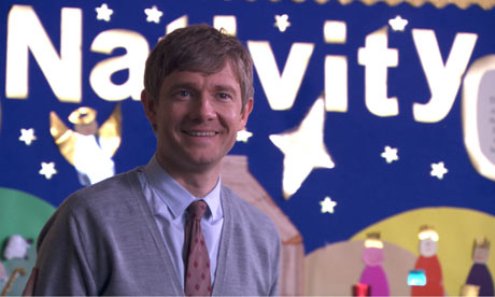 Back in the day, Paul (Martin Freeman), his girlfriend Jennifer (Ashley Jensen) and their best friend Gordon (Jason Watkins) were big shots on the Am-Dram scene, all hopeful of making it as actors.

Some years on, Paul and Jennifer have split up – she now works for a film company in Hollywood, he teaches at a local state primary and Gordon is a black-robed master at the rival private school.

The schools famously compete for the best reviews for their nativity plays from the local theatre critic (a sandwich guzzling Alan Carr), and supercilious Gordon, with his cash-rich cast, always comes out top.

This year, it’s Paul’s turn to direct. When he’s assigned a veritable grown-up baby, Mr Poppy (Marc Wooton) as a classroom assistant to help him, his heart sinks; in a moment of weakness, when he bumps into Gordon, he blurts out that “Hollywood” – in the form of his estranged ex – is coming to make a film about his show. Mr Poppy overhears this and spreads the word. Soon, the impending arrival of the big shots is the talk of the town.

In that it deflates Gordon’s oversized ego, it’s not a bad thing, but when the lie is revealed, the furious head mistress (Pam Ferris) scraps the show.

But the children have worked so hard that Paul decides that the show must go on. He builds bridges with Mr Poppy and sets out to put on the best nativity play ever.

What’s wrong with a script?

Why do some directors seem to have an aversion to telling the actors what they want? Actors are employed to put an artist’s vision on the screen, not to write the artist’s vision for them. Allowing them to collaborate on the dialogue to make it feel more authentic is one thing, but giving them free reign, without strong leadership, is often asking for trouble.

You’d think, perhaps, Debbie Isitt would have learnt her lesson from her last such outing – Confetti – which on this very website, I remarked had “forgotten the one thing any good film needs – a good script.”

You could almost read that review for this film – “the actors clearly had immense fun as they improvised” – “we’ve seen every single one of these gags before – we can see every one of these actors on a daily basis in our living rooms, being much funnier and more original than they are here” – “disappointingly shallow” – “astoundingly contrived” – the list goes on.

OK – so who cares what I think? Debbie Isitt clearly doesn’t. But it didn’t work then and it doesn’t work now.

Singing children do not a family movie make.

When I saw this film had a U certificate, I felt a sharp intake of breath, but Up was a U – and that entranced children and adults alike – while Dean Spanley offered more to adults than youngsters.

But in this era of computer games, internet and blanket mobile media, I can’t believe the audience for this film – pretty much like any nativity play, in fact – would extend past its cast, their families and their friends.

Given the choice of what to see at the cinema, would most primary school children chose a Pixar or Aardman animation, a Spykids or Stormbreaker adventure or a film about a bunch of children singing badly, with adults standing by, bearing variously looks of horror, despair and pride?

I suppose there’s a sense in which some of it is like watching X Factor auditions, which can work, particularly if one contestant turns out to surprise Simon Cowell with unexpected talent – but a story as hackneyed, inconsistent and incoherent as this strips the film of what little good nature it deserves.

The headmistress bans the production – yet without any support from the school, they come up with dozens of perfect costumes, lighting rigs, cranes, sound systems, a huge stage beneath Coventry’s cathedral ruins – all without anyone finding out what they’re up to? And do we really need to see the whole play? Since about the only writing that did get done for this film was a few songs, we get treated to what feels like a full Broadway production of self-indulgent musical numbers.

It wasn’t funny. It wasn’t clever. Gatecrash a real nativity play – it would be more fun.

Oh – and having an exclamation mark in the title doesn’t make the film funny!

It seems as if anyone could just say “I want to make a film in Coventry” and Screen WM will throw money at you. It’s not like they need to see a script first! (See: exclamation mark = joke)

From Act One, the highs and lows could be plotted on graph-paper and the twists and turns could be chalked up on the blackboard (OK, I know they use projectors these days…but still…). And if one more character turned up in the nick of time, realised the error of their ways or joined in a song-and-dance routine, I’d have sent the whole lot of them to Coventry!