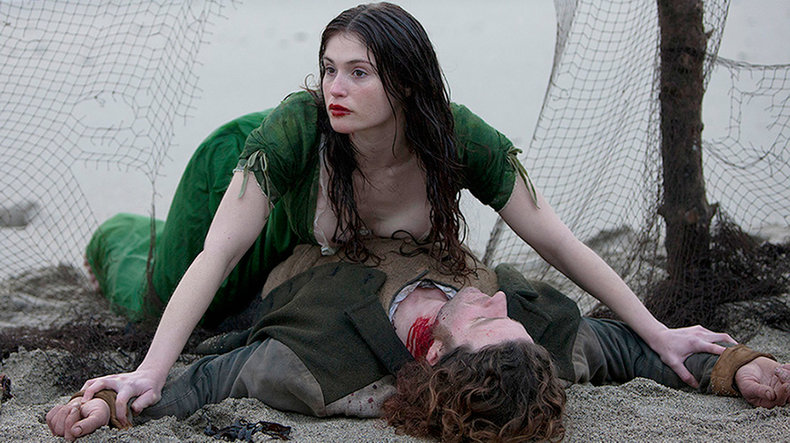 Sleazy nightclub stripper Clara (Gemma Arterton) has to leave town quickly after a bloody run-in with someone from her past, taking frumpy young Eleanor (Saoirse Ronan) with her.

The pair, it turns out, are vampires – long undead, doomed to roam around earth forever, unable to make relationships with anyone who’ll get old and die.

When they arrive at a new seaside town, they seek refuge in a derelict hotel, owned by the awkward and lonely Noel (Daniel Mays). Clara supports them by running a brothel from the hotel, while Eleanor enrols in the local college where she falls for a class-mate, Frank (Caleb Landry Jones).

Through her writing assignments, Eleanor leaks out secrets about her past, but it’s not just her teachers who become suspicious that there’s more to these enigmatic young women than meets the eye.

In the years after the Twilight films and with True Blood still fresh in people’s minds, it’s difficult to come up with something new to do with vampires.

About as original as this gets is to have the blood-suckers puncture the skin with thumb-nails that extend when they’re thirsty, rather than with fangs. The ritual by which vampire are created is also new, but while visually dramatic, it’s narrative nonsense. Neither of these add enough to the vampiric canon to make this feel particularly worthy of our time.

With the pair being vampires, they’re a couple of centuries old, so we get to see how they lost their humanity in flashbacks that are intercut with the current story. Unsurprisingly, the flashbacks tie up with the present day, but in a way that feels contrived, as characters from the past turn out to be unconvincingly trailing our heroines.

Gemma Arterton is the more full-of-life – for want of a better phrase – of the two, but the central emotional story revolves around Saoirse Ronan, whose character is so downbeat and dour that it’s hard to care for her. Her loner of a boyfriend is equally lacking in vitality and – conveniently – struck by a blood disorder that helps to nudge the plot along.

Their relationship hardly has the glamour that Hollywood bestowed on Kristen Stewart and Robert Pattinson, which makes you wonder who the film is even aimed at.

Hastings – which stands in for the un-named seaside resort – is shot as the last place anyone would want to live; the only lights in the whole town seem to be the name of the hotel, Byzantium, in neon, which makes the modern day less of a contrast with the nineteenth century.

That said, the film is nicely shot; moody cinematography effectively contrasts the sleazy glamour of strip-clubs with the desolation of concrete housing estates,the neon of the hotel sign with the dilapidated nature of the building itself, and a fairground with the drab nature of the rest of the seafront.

It’s hard to create a new lore for vampires and to make us care for a pair of miserable people, doomed to roam alone through time, requiring the death of humans for their own survival. This does not make for a particularly convincing argument for why we should engage emotionally in their journey – and there is little satisfaction to be gained from reaching the end of our journey with them.