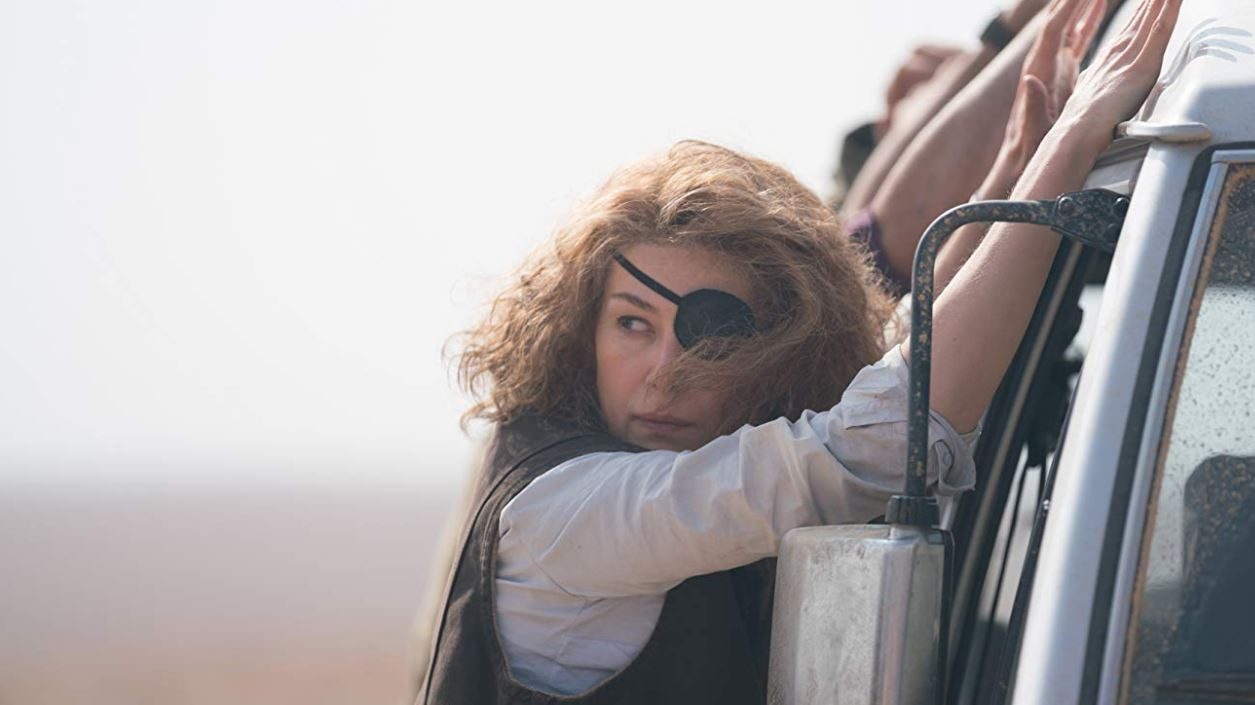 Marie Colvin (Rosamund Pike) was one of the the most acclaimed foreign correspondents in the world.

Her editor at the Sunday Times, Sean Ryan (Tom Hollander) was always pleased to crow about her exclusives, filling his front pages, from war zones from Sri Lanka and Iraq to Afghanistan and Syria.

If there were personal stories to be told, amid the fighting and the politics, Marie Colvin would risk her own life to tell them.

But as the years go by, the stress of what she sees starts to take its toll on her.

In 2012, she’s finally able to get back into the field and she heads for Homs, a beseiged rebel-held area in Syria. After a frustrating break from reporting, she’s more determined than ever to tell the world about the injustices she sees – but when she wants to refute President Assad’s claim that he’s bombing only terrorists and not civilians, his forces have their own plans to stop her.

A Private War – like Marie Colvin herself – does its best to disclose many of the injustices done by the powerful to the powerless in war-zones across the Middle East and beyond over 25 years.

It does a terrific job of presenting the wreckage of people’s homes and lives on the big screen and often provides thrilling moments as journalists cower for safety in anticipation of an attack or run for cover from snipers’ bullets.

But too often, the film too often falls flat in between these moments – while she’s wandering around the killing fields of the Sunday Times’ London office and associated journalistic backslapping events.

Colvin wrote for a newspaper so words were her thing – or more specifically, the written word. And whether it’s direct lifts from her contemporaneous articles or passages from memoirs, too many of the links between the action play like verbose exposition. As a piece of cinema, it might have been more effective to let her experiences speak for themselves.

Fascinating, admirable and powerful as her career was, her relationships (with Greg Wise and Stanley Tucci, in a disappointingly insignificant role) don’t add enough to the bigger picture to warrant the screen-time they’re given, in a film that doesn’t need to be pushing two hours.

Maybe her life was all about war reporting and nothing else mattered – not that I’m saying a cinema audience needs to see only death, destruction and despair; we see enough of that on the news – but showing us the relationships – failed or otherwise – of the people who travel around the world to tell us about the death, destruction and despair, doesn’t particularly add to the horror or what’s going on around the world.

And given Colvin’s very clear mission from the start, she doesn’t change as a character enough for a cinema audience to need to go on this journey with her.

Being released just two weeks after an American court ruled that President Assad was responsible for her death, a more compelling cinematic epitaph might have felt more appropriate.