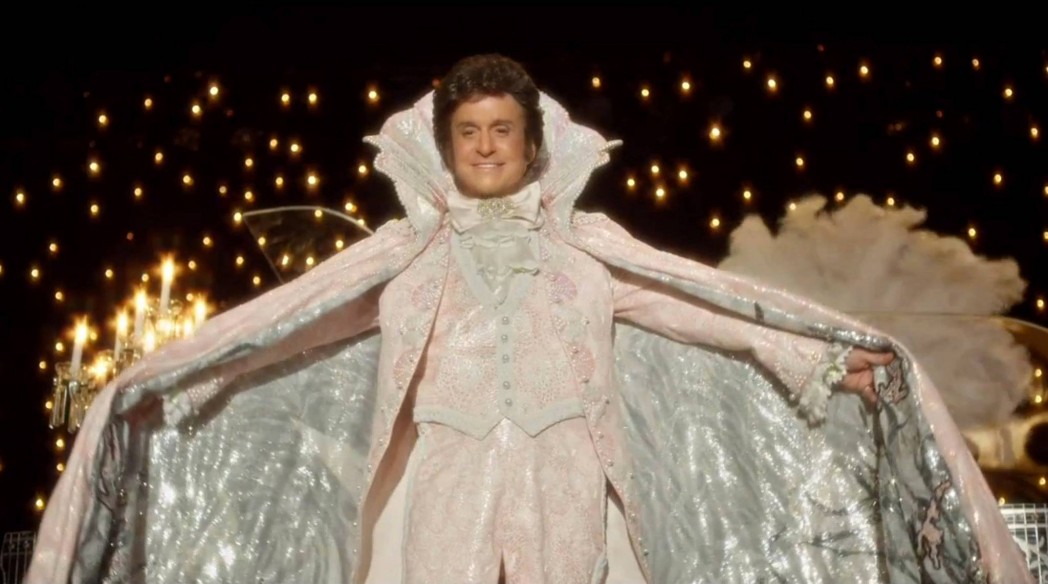 In the mid 1970s, a gay teenager Scott Thorson (Matt Damon) is working as a dog trainer on film sets in Hollywood.

A friend with connections takes him to Las Vegas to see a performance of the flamboyant pianist Liberace (Michael Douglas), who immediately takes an interest in him when the pair are introduced backstage.

When the attention from this fabulous celebrity is followed by an offer to be his personal assistant, Scott can’t resist the lure of the lavish lifestyle, and despite the caution raised by his foster parents, he moves in with the world’s highest-paid entertainer.

Scott’s role within Liberace’s entourage grows from being a personal assistant to an on-stage chauffeur and – of course – an off-stage lover.

Over the next five years, Scott grows in confidence as the relationship between the pair blossoms, until suddenly, he isn’t so young anymore – and as he’s struggling with a drug problem, Liberace catches the eye of another young hunk, and soon Scott is cast aside.

Steven Soderbergh knows how to tell a story. The production design alone immerses the audience in the period, with performances – from Michael Douglas in particular – that make you feel you’re genuinely peeking behind the curtains into the personal life of one of the most outrageous entertainers the most outrageous city in the world has ever seen.

The director had already said his previous film, Side Effects, would be his last. He can justify making another one because this biopic of the flamboyant gay pianist Liberace was made for the HBO TV network in the US, sadly disqualifying Michael Douglas’s remarkable performance from recognition at next year’s Oscars.

But rightly, first at Cannes and now in the UK, audiences have been given the opportunity to see this bold film on the big screen, where such a big performance belongs.

In its historical context, the story is fascinating, when you consider the flamboyance and overt homosexuality surrounding Liberace both in his personal life and on-stage, yet he successful sued the Daily Mirror for libel when it accused him of being gay. Coming out – as it were – at a time when legislatures all over the world are grappling with – and mostly legalising – gay marriage, highlights how attitudes have changed.

While Douglas pitches every note – literal and metaphorical – perfectly, Matt Damon is equally impressive, as a man in his forties convincingly playing a character more than twenty years his junior. It’s immediately clear why a young man, with a damaged childhood, might have been attracted by the extravagance, splendour and apparently unconditional love, however creepy it might have looked to the outside world – or even the entertainer’s inner circle.

It’s refreshing that despite how surreal his life with Liberace was, how brutally he was cut off and denied and palimony after a lengthy legal battle, the story is not told with bitterness.

But just as the film is, perhaps, kinder to Liberace than he might have deserved, it also looks through similarly rose-tinted specs at Thorson himself. It is, of course, based on his own telling of this period of his life, raising questions about his reliability as a narrator, but Soderbergh adds captions at the end that tell us that despite denying his homosexuality until his death, Liberace died from an AIDS-related illness – they don’t tell us, however, that since his time with Liberace, Thorson himself has been given a new identity after giving evidence in a murder trial against a leading gangster and is currently awaiting sentence for stealing and using credit cards.

Fascinating and enlightening as this story is, a sequel about what happened in his life next might be even more cinematic. If you’re thinking of making another film after all, Steven…?