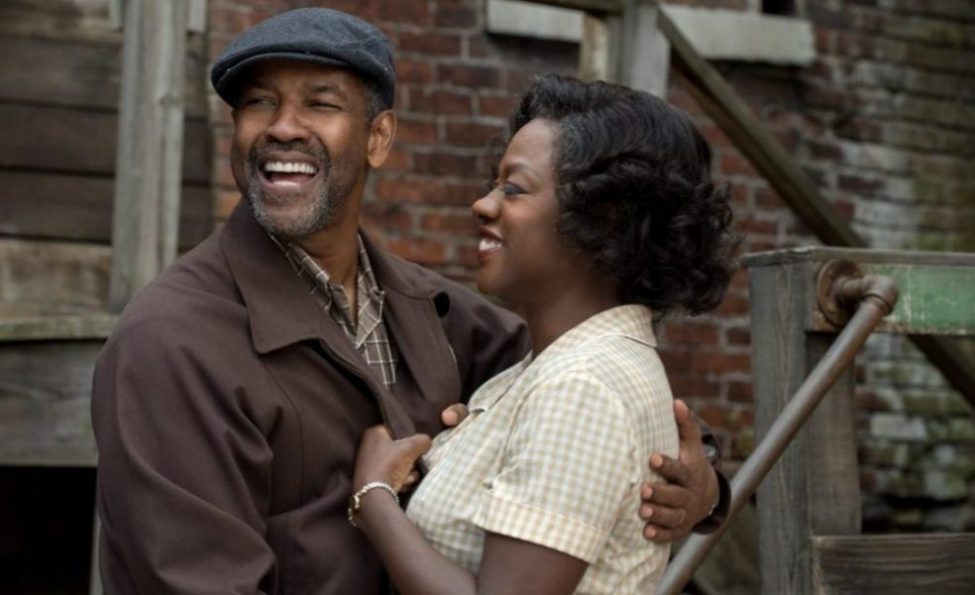 It’s the late 1950s and Troy (Denzel Washington) and Rose (Viola Davis) live in one of those areas where without exception, everyone is black, not far from one of those areas where everyone is white. And at work, the black men – including Troy and his best friend Bono (Stephen McKinley Henderson) – collect the rubbish bins and empty them into the back of the lorry, while the white men sit in the driver’s seat, never troubled by the rubbish outside their cabin.

Troy is dismissive of his son from his first marriage, Lyons (Russell Hornsby), a struggling musician who only ever seems to pop round to see him on pay day, when he needs a loan. Or to ask his dad to come to the club to see him play. Troy isn’t interested.

Troy is similarly dismissive of his younger son with Rose, Cory (Jovan Adepo), a bright college boy who’s more interested in pursuing a career in sport than getting a trade, despite his father’s insistence that white men won’t let black men play in the major leagues – something he’s concluded from his own bitter experience.

Troy spends his days chatting to Bono on the back of his bin lorry, his evenings drinking with Bono in his back yard and his weekends, never quite getting around to building a fence around the garden, because Cory is too busy playing sports to help him cut the wood.

Rose spends her days cooking and cleaning and washing – and looking out for Gabriel (Mykelti Williamson), Troy’s brain-damaged brother whose Second World War pension helped him buy his house.

Troy has become increasingly combative as he’s entered middle age, disapproving of his sons and their dreams, rejecting the black man’s position in life, arguing with his best friend about almost anything as he tries to put the world to rights. His relationship with Rose seems to be about the only source of stability in his life – until a secret comes out that will change everything.

There is much to admire in Denzel Washington’s passion project, that has fittingly arrive in cinemas in the year after the Oscars So White scandal, giving the Academy two very good reasons to include black performers among the acting nominations.

There’s little doubt that the towering presence of Washington himself in the central role – complete with an aging limp, short temper and over-compensating smile – and the quietly submissive support from a stoic but tragic Viola Davis, whose emotions stream out of her nose during her most difficult moments, are thoroughly deserving of their nominations – recognition which would almost certainly have been earned had the film been released a year earlier, thereby avoiding the controversy in the first place.

The film’s other nominations – Best Picture and Best Adapted Screenplay – are a little harder to justify outside the context of a Hollywood, keen to show that it’s as diverse as bag of Skittles.

Adapted from August Wilson’s stage-play by the writer himself, the screenplay is full of lengthy monologues that help the main characters paint their emotions across the screen in a delightfully, but unnaturally mellifluous tone, the words – and they way they’re delivered – feel more suited to the page or the stage than a screen which aims to mimic reality. Sticking closely to the original play, apart from the opening scene on the back of Troy’s bin lorry, almost the entirety of the story unfolds in his back yard and kitchen – and with, almost exclusively, those characters mentioned above.

Bono spends most of his life with Troy, but we never meet his oft-mentioned wife Lucille. They’re almost never out of their back-yard, but none of the neighbours ever step into theirs. We hear about a handful of other characters – some quite key to the unfolding of the plot – but they’re never introduced. In a theatre, it would require building another set or hiring more speaking actors, but such constraints don’t exist in a Denzel Washington movie.

But it’s not just the script that feels theatrical – the grandiose performances of Washington and Davis themselves might feel more comfortable on stage, they way they project their voices and march around a defined set in a purposeful way, as if one step too many will see them disappear behind a curtain.

Most of the film feels like we’re watching a filmed version of the stage play, rather than any attempt to put it on – and so lift it off – the screen.

At nearly two and a half hours, with not enough really happening – or at least being seen to be happening – it tends to feel like, however beautiful the language, we’re just being spoken at – and while much of the dialogue presents some interesting observations – about these characters, the world the lived in and the wider historical aspects of their existence, too often it drags.

It’s not a film about America’s civil rights movement – it’s more of a study of the down-trodden working class that’s simply set against that backdrop, as the crux of the drama – relationship difficulties between and within generations – could equally happen in any community. And while it’s full of cliches, from the struggling black musician to the budding black sportsman, the one time anyone actively challenges the status quo, he succeeds, suggesting that perhaps black equality could have been won much sooner if only black people had asked, rather than just assumed there was no point trying.

It’s notable that the message from the late 1950s appears to be that the older generation of black people, through their own experience, drilled any hopes and ambition out of their off-spring, thereby holding back progress and perpetuating the race divide.

There are interesting messages and interesting moments – but it takes too long to get to them and their too few and far between for a film of this duration.

Recreating their own award-winning stage performances, Washington and Davis are certainly among the most impressive screen appearances of the year, the screenplay is effective but overlong and perhaps too skewed towards the wrong platform, while the direction – stagey and beholden to a script that gives it little scope to breath – suggests that its only Hollywood’s guilt that earned this a Best Picture nod.