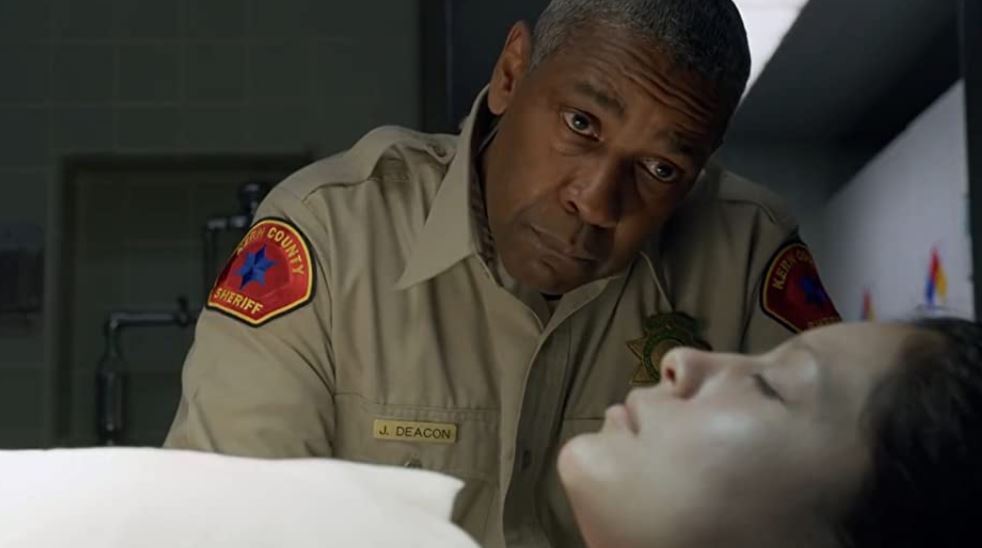 Ageing California Sheriff’s deputy, Joe “Deke” Deacon (Denzel Washington) is sent to Los Angeles to pick up some evidence in a case.

While he’s waiting for the LA County Sheriff’s department to release the items, he gets chatting to his former colleagues in the big city, where some years earlier, an unsolved serial killer case prompted personal problems that drove him to give up his detective badge in favour of a quieter life in uniform, a hundred miles north.

When a young woman is murdered during his visit, Deke ends up joining his successor as lead detective, Jim Baxter (Rami Malek), at the crime scene and is invited to stick around to help with the investigation.

The longer he stays, the more he’s drawn back into the case that turned his life upside down, as the overconfident upstart who replaced him finally meets his match.

As he continues to chase his own ghosts, Deke’s inquiries lead him to a fridge repairman, Albert Sparma (Jared Leto), but pinning the killings on this enigmatic suspect is not going to be easy.

Director John Lee Hancock’s police procedural thriller has all the ingredients to stand out from the crowd, from the charismatic leads of Denzel Washington and Rami Malek and a slimy Jared Leto as their antagonist.

But every character feels like they’ve been plucked out of a police-film database, while their arcs are predictably formulaic – right down to the old-timer finding his feet again, while the precocious upstart loses his self-confidence under his new mentor.

There’s some satisfaction to be gained from trying to work out whether Leto’s murder suspect is the man who’s been haunting Deke for years or is simply an attention-seeking sleaze-bag – either way, he’s a socio-path with no interest in justice. But while he’s necessarily enigmatic, he’s a shallow character who doesn’t have the mesmerising hold over the audience of other screen villains, such as Kevin Spacey in Seven, another thriller in which a rookie and a veteran hunt a sex-offending serial-killer.

At the heart of the film, Denzel Washington is perhaps the only likeable character, shuffling through this unexpected opportunity to exorcise his demons, although scenes such as a brief catch-up with his ex-wife feel unnecessary, while putting him up in a sleazy hotel, where he pins photos of the victims on the wall, makes it look like his character has been watching too many detective films himself.

“It’s the little things that get you caught,” Deke warns Jim – but apart from it being a neat line that provides the film’s title, it doesn’t resonate in the context of the film. It just adds to the feeling that this is more of a detective-thriller check-list than a satisfying crime drama.

As the most active of the major movie studios, Warner Bros is at least offering viewers more to watch than its rivals, but perhaps the Covid crisis just provides the perfect cover to drop mediocre films such as this straight onto streaming services.