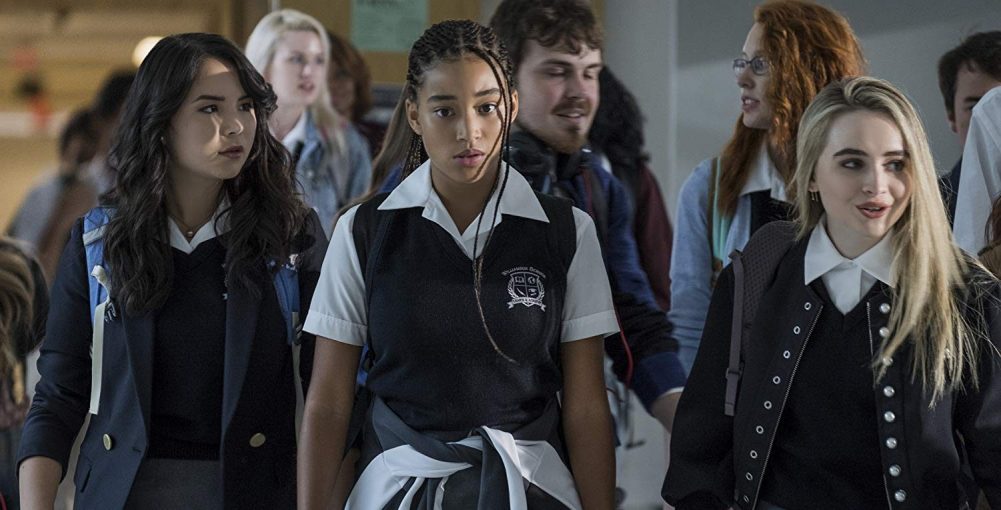 To protect his children from following the same path, he sends them to the posh, Williamson prep school in a nearby, mostly white suburb.

Sixteen year old Starr (Amandla Stenberg) finds herself leading a double life, not wanting her black friends to know she goes to an expensive white school, while she’s trying to stop her school friends finding out that she lives in a deprived black area.

But hard as she tries to keep them apart, her two worlds collide when she’s the only witness to the fatal police shooting of her childhood friend Khalil (Algee Smith). Things are complicated further by the fact that while Khalil was unarmed at the time, he was known to deal drugs for the local gang boss, King (Anthony Mackie).

When it looks like the officer who shot him might not face justice, Starr decides to put her head above the parapet and speak to the police and press, but King will stop at nothing to ensure that the police don’t start sniffing around him.

Squeezed between her black neighbourhood and her white school friends on the one hand – and between the police and King’s drugs gang on the other – the usually quiet girl puts her own safety – and friendships – in jeopardy to fight for justice.

This adaptation of an influential novel by Angie Thomas is a bold and earnest attempt to present the many conflicts in the life of a black teenager who just wants the same kind of simple life enjoyed by her white school-friends.

It’s an urgent story, well written and with strong performances, as Amandla Stenberg’s Starr has to grow up quickly, find her place in society and reconcile the different worlds in which she lives and the rival forces fighting for influence over her life.

But while the story explores some important social issues, it doesn’t add much to an ongoing debate and a busy field. The facts that police officers shouldn’t kill unarmed black people – and if they do, they should face justice – seem so obvious that we don’t need another film to tell us.

The most interesting elements are the more subtle truisms that lurk under the surface and are rather glossed over – white people don’t understand that black people want to be treated the same but want society to acknowledge that they’re different – the liberal elite piggy-backing a cause for their own gain – the explanation from a black police officer as to why they might shoot, along with the acknowledgment that maybe they cut white suspects a bit more slack – the biggest threat to young black lives is from black gang members, not the police, but no-one thinks to protest about that…

Some elements of the plot don’t particularly ring true – could she really keep her two lives apart? – would a grand jury, including black members, really decide not to indict the officer? – some of her friendships are unconvincing, not least would a boyfriend (KJ Apa) treated so badly remain so loyal when he can have the pick of the school? – and there are moments when we’re asked to believe that police brutality is taking place because of racial prejudice, when in truth, someone who appears to be starting a fight, right in front of the police, would be arrested regardless of their race – but these, and others, need to be contrived for the plot to work.

This all makes the story-telling feel more clumsy than subtle, more formulaic than mellifluous.

Ultimately, it’s a powerful film while you’re watching it, but with no solutions to an ingrained problem other than “we should stop hating each other,” it’s a film that makes you angry but leaves you feeling flat.