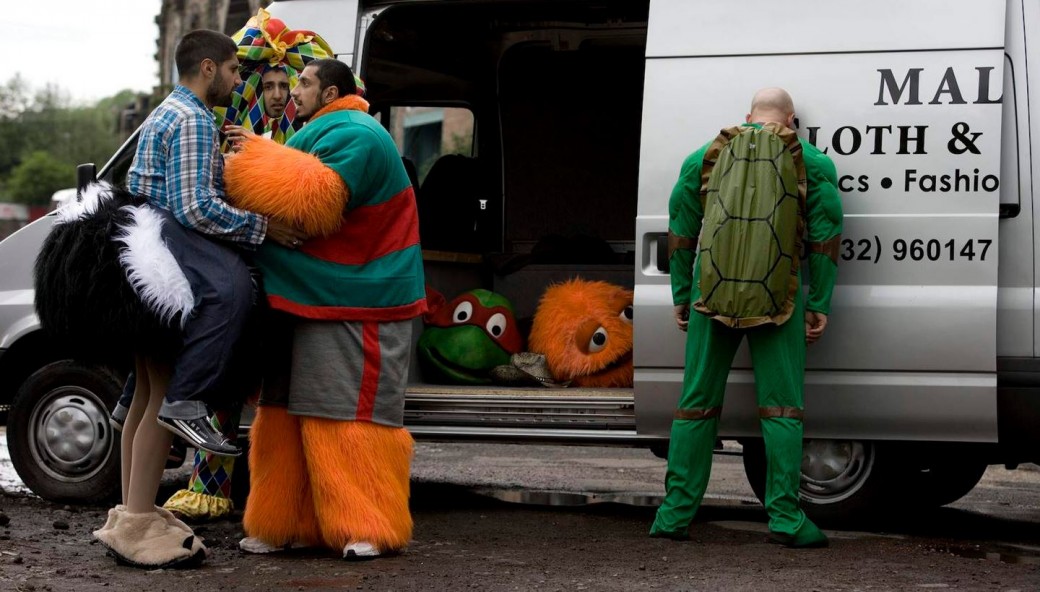 Omar (Riz Ahmed) is a family man, living with his loving wife (Preeya Kalidas) and young son, working as a security guard at a Yorkshire shopping centre. Oh – and he’s the leader of an Islamic fundamentalist terrorist cell.

The rest of his gang include his idealistic, but simple best friend Waj (Kayvan Novak), Faisal (Adeel Akhtar), who lives in a world of his own, white convert Barry (Nigel Lindsay) and last-minute recruit Hassan (Arsher Ali).

Omar has his head screwed on right – but all the others, in their own ways, are slightly deficient in their mental capacities.

Omar and Faisal attend a terrorist training camp in Pakistan, but when things don’t go to plan, they get sent home without a mission. Omar is too ashamed to admit this, so he persuades the others that they’ve been given a job to do and prepares the cell for a freelance mission, to blow themselves up at the London marathon.

Only the brains behind The Day Today and more specifically Brass Eye, Chris Morris, would be so bold as to try to satirise Islamic fundamentalism, not least because it’s probably about the only area of modern life that he hasn’t yet had a chance to pillory.
Many people might approach this with caution; it’s not obvious, after all, how you can laugh at terrorism.

The first thing to say about Four Lions is that it is funny. Very funny. You will laugh. Aloud. A lot.
But I fear it doesn’t work the way he hopes it might. Despite extensive research to get to the bottom of his characters, the film plays like a farce, rather than a satire. Most of the humour is slapstick – funny voices, misfiring rockets, exploding crows, fancy dress constumes – rather than cerebral.

It tackles every detail of the preparation for a bombing, from the recruitment of cell-members and the filming of the martyr videos, to the terrorist-training camps and the execution of the attack – at each point, it highlights oddities, sometimes based on the building blocks of the activities, sometimes based on the peculiarities of the characters.

Now, here’s the thing. No self-respecting terrorist – such as Omar – would hang around with even one person with no grasp of reality – Omar surrounds himself with four. Watching the group bickering makes this film feel more like you’re watching a group of drunken friends on stag-weekend, where the designated driver is keeping off the booze. It could almost be a film about a five-a-side football team training for a tournament in London. It’s a buddy movie more than it is a study of terrorism, its causes and effects.

The characters feel so comically contrived that Four Lions is not so much a satire on religious extremism, as it is a satire on stupid people – and it’s not very hard to satirise stupid people – which means, oddly for Chris Morris, while the film is uncomfortably funny, it isn’t that clever. And on those rare occasions where the humour is turned against religion, the satire is gentle and safe, rather than brutal.

There are a handful of tremendously sharp moments – often the throwaway lines are far better than the structured gags – but while thoroughly entertaining, the comedy is much broader than it is brave. The characters are so far removed from reality that in the unlikely event that extremists find themselves watching this, they are unlikely to recognise any of them and so unlikely to find it offensive – and the film makes no attempt to explain why they want to kill innocent people and why their friends and family don’t seem to be worried about what they’re planning.

There are some truthful observations, such as the truly religious imam being far more moderate than the secular terrorists, but like the best of the humour, such moments are too scarce.

Bearing in mind it’s written by Chris Morris, with some of the team from Peep Show and The Thick of It, this film about Islamic fundamentalists planning a terrorist attack on the London Marathon seems to have surprisingly little to say. Four Lions is little more than a piece of entertainment, which for most films wouldn’t be a bad thing at all. Here, it’s just a little disappointing. Somewhere along the line, it feels like they’ve pulled their punches.