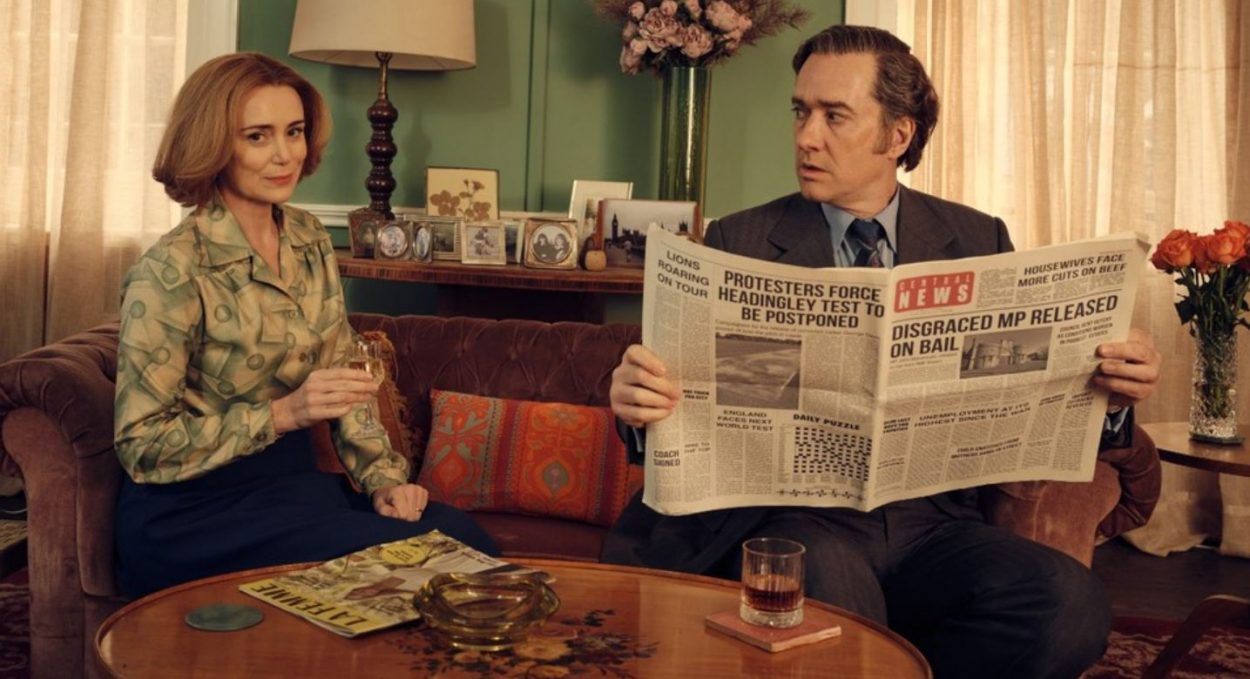 In 1974, the Labour MP and former government minister John Stonehouse (Matthew Macfadyen) went swimming in the sea during a business trip to Miami – and never came back.

His wife Barbara (Keeley Hawes), their three children and the entire political establishment from the prime minister Harold Wilson (Kevin McNally) down assume he has died.

But his secretary – and mistress – Sheila Buckley (Emer Heatley) knows the truth.

Amid the failure of his business interests and accusations that he’s spying for Czechoslovakia, he’s faked his death to try to start a new life under new name in Australia.

But when eagle-eyed locals in Melbourne smell something fishy, Stonehouse’s scheme, his family and Labour’s wafer-thin majority in the House of Commons are blown apart.

Like many “based on real life” dramas, ITV’s 3-part series comes with a disclaimer, explaining that some of the events happened as depicted while others didn’t, but with a story that is literally as incredible as that of John Stonehouse, it almost undersells what did happen by including things that didn’t.

I’m going to add a disclaimer of my own, at this point: my knowledge of this story is perhaps deeper than most viewers will have from the outset, because I’ve been working, on-and-off, on my own John Stonehouse production for about 14 years. This being the case, I was aware what was coming – what was missing – and what shouldn’t have been there – and, scene-by-scene, I was imagining how my version might have compared.

So, at risk of judging writer John Preston and director Jon S Baird’s version of this tale of political intrigue against my own – as yet unproduced – vision, the first point to note is that approaching 50 years since the astonishing events depicted, it’s almost beyond belief that it’s taken this long for someone to dramatise them.

The tale of the rise – and fall – of a politician, involving extra-marital affairs, claims of spying for the communists, alleged links to foreign organised crime gangs, fraud, faking a death, mistaken identity, an MP in prison holding the balance of power in the country and more – this story has it all. If you saw this on film or TV, as they say, you simply wouldn’t believe it could be true.

Preston and Baird take the bold decision to treat the over-arching story as almost a farce, portraying their central character as a bit of a Boris-like bumbling buffoon? Matthew Macfadyen is certainly fun and undeniably disarming as his ambition, narcissism and greed scream from his angelic face, but the mood doesn’t quite fit with the characters and story unfolding around him.

From the opening credits, which look and sound like an homage to the title sequence of Catch Me If You Can, it’s clear that the creators see Stonehouse in the same light as Leonardo DiCaprio’s charming fraudster, but while they both forge paperwork, the bright and breezy air of Spielberg’s comedy feels a little irreverent for a tale that touches on espionage, mafia hits, family break-up and the death of idealism.

Like a recent Channel 4 documentary, the ITV team dedicate a fair amount of air-time to the spying allegations – claims that Stonehouse’s daughter Julia has vehemently rejected. But this isn’t the kind of spying recently seen in A Spy Among Friends or familiar from James Bond films; filling much of the first episode, it’s largely played for laughs, from the moment the MP turns up at the Czech embassy and announces himself as “Stonehouse. John Stonehouse.”

But could the Mr Bean of the Cold War go on to plan an intricate Day Of The Jackal type plot to fake his own death and set up in a new country with a new identity? OK, so history reminds us that he didn’t get away with it for long – but he got closer than a buffoon might have done.

The narrative largely unfolds in a fairly pedestrian fashion, making what should be a constantly surprising plot unfold in an oddly matter-of-fact way. Most of the meat of the Stonehouse story is over by the end of Episode 2, making the third and final hour feel somewhat anti-climactic.

Too much of the narrative is driven by on-the-nose dialogue, exposition, TV shorthand or knowing nods and winks, which are – perhaps – more in keeping with the comic treatment chosen by ITV than might seem befitting of a political scandal which mortally wounded an already weak government.

The lightness of touch and simplicity of the script mean that this mini-series works as a charming enough piece of fluff. But the real story of John Stonehouse is altogether darker – and more remarkable.