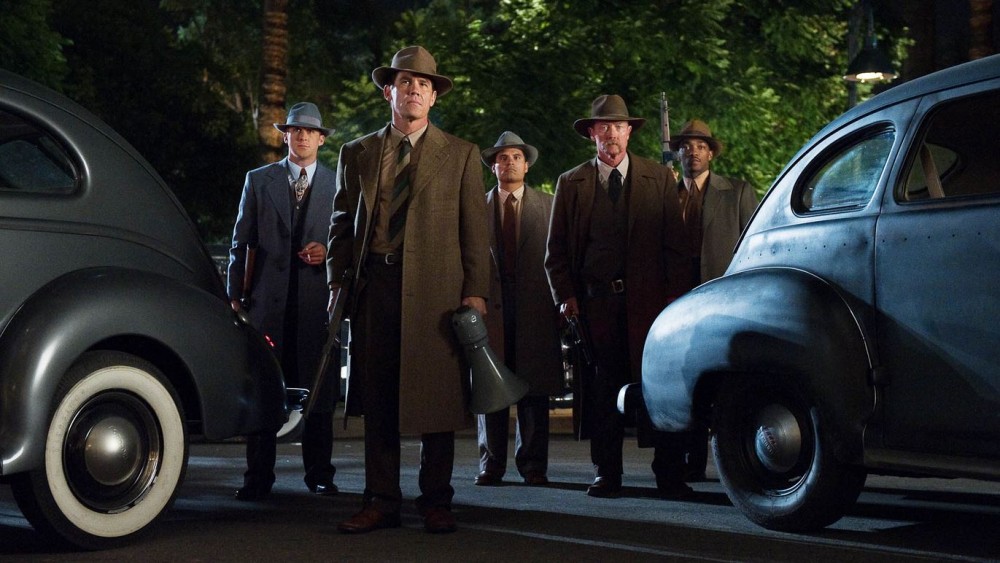 In the years after the Second World War, east coast gangster Mickey Cohen (Sean Penn) has moved to Los Angeles, where he’s doing a pretty good job of securing the west coast for himself, his strategy being to pay off any police who might threaten his domination of the criminal underworld. They let him get on with it and he sees to it that they prosper too.

As Cohen’s grip on power becomes tighter than that of the police and politicians, LA’s top cop Chief Parker (Nick Nolte) finally decides that this has got to stop. But with so many of his own officers in Cohen’s pocket, it’s hard to know who he can trust to bring the ruthless gang boss to justice.

Parker calls in Sergeant John O’Mara (Josh Brolin), the kind of former soldier who, with few other qualifications, is putting his military skills to civilian use in the police force. O’Mara is tasked with putting together a squad of trust-worthy officers who can work under the radar to dismantle Cohen’s gang and put its leader behind bars.

After two comedy thrillers, Zombieland and 30 Minutes or Less, director Ruben Fleischer turns his back on humour to deliver one of the most violent thrillers of recent years.

Even with most film-goers being familiar with the levels of brutality typical of directors such as Quentin Tarantino, Gangster Squad will feel like a smack in the face with a frying pan; from almost the first frame, blood is spread liberally, bones crunch, limbs are removed – there are almost no depths to which Cohen and his goons will not stoop to confirm their notoriety – we get the picture. While many other films treat their violence with comic-book exaggeration, Gangster Squad is uncompromising in its graphic reality, which makes it all the more astonishing that it secured a 15 certificate; the censors are clearly less concerned about violence than they are about sex and drugs, which hardly feature here.

There is little original about this film – police in the pockets of the ruthless gang boss, who can be brought down only by a squad of rogue cops – one of the cops (Ryan Gosling) even falls for the gangster’s moll (Emma Stone) – but it’s executed skilfully enough and it would be churlish to deny the entertainment value.

If you can stomach the extreme violence and don’t mind the familiarity of this formulaic story-telling, Gangster Squad is an exciting, well-paced, effective and stylish thriller, populated by uniformly strong – if stereotyped – performances from a highly accomplished ensemble cast.