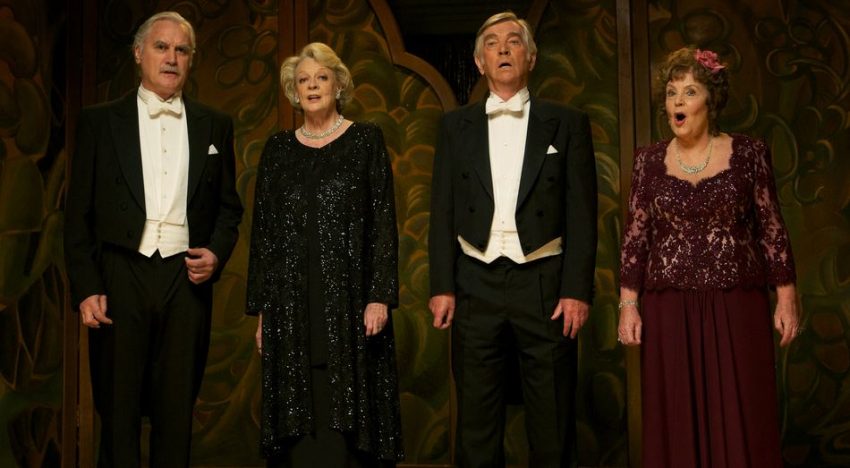 The arrival of the legendary opera singer Jean Horton (Dame Maggie Smith) at a residential home for long-since retired musicians causes a degree of turmoil among the fellow residents.

Reginald (Sir Tom Courtenay) is angry that he wasn’t told that she was moving in; the pair had once shared a brief marriage and he’d never really got over her.

Each year, the residents stage a concert to celebrate Verdi’s birthday. This year, with the home running into financial difficulties, the organiser of the concert, Cedric (Sir Michael Gambon), spots a moneymaking opportunity – if he can persuade Jean and Reginald to join fellow residents Wilf (Billy Connolly) and Cissy (Pauline Collins) to reunite to sing their famed rendition of the Quartet from Rigoletto, they’re bound to take enough in ticket sales to save the home.

This film is notable for many reasons, not least being the latest film to target the grey pound, after the success of The Best Exotic Marigold Hotel.

But it’s most notable as the directorial debut of Dustin Hoffman. After nearly fifty years in the business, he’s finally got around to directing, and rather than going for the kind of films that helped him build one of the most successful careers in the history of Hollywood – thrillers such as All The Presidents Men and Marathon Man or dramas, including Kramer Vs Kramer and Rain Man – he’s gone for a small-scale, gentle comedy.

From a script from the Oscar-winning Ronald Harwood and with a cast including some of the finest the British acting aristocracy has to offer, you’d almost feel like this project didn’t even need a director at all. But Hoffman’s experience in front of the camera meant he could give everyone the space they needed to make the most of Harwood’s words, without stepping in and getting in their way.

The result is a highly competent, charming story about aging gracefully and resolving issues from your past to enable you to retire with dignity. The performances are beyond reproach – but a little predictable; Michael Gambon’s flamboyant impressario is a little over the top and Pauline Collins’ Cissy is almost pitiful as she struggles with the onset of dementia – it’s a little discomforting, seeking humour in that.

The film is a harmless chamber piece, that will raise smiles – not laughs – and while it’s perfectly enjoyable, it’s equally forgettable.

It’s a shame that with so many cinematic greats involved in the project in one way or the other, while there’s much to admire, Quartet is decidedly average.