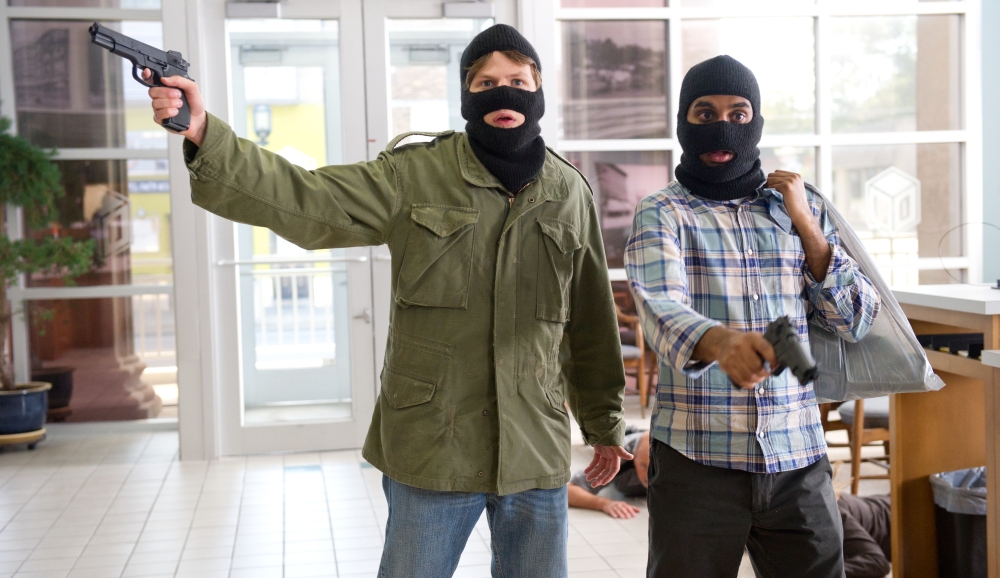 Dwayne (Danny McBride) is a big-time small-town waster, waiting for his lottery-winning former military Dad (Fred Ward) to die so that he can enjoy his millions. Unable to bear his rightfully judgemental father any longer, Dwayne concocts a plan with his dumb sidekick Travis (Nick Swardson) to kill him for the inheritance.
They can’t do it themselves, obviously – he has to be killed by someone with no link to them, so they decide to hire a hitman (Michael Peña), but he wants to be paid upfront, and they don’t have the ready cash.
So next, they need a cunning plan to get the money; what better way than to force someone else to rob a bank for them?
They order a takeaway pizza and the unsuspecting delivery guy Nick (Jesse Eisenberg) turns up, gets knocked out and comes around wearing a bomb vest which he’s told will explode if he doesn’t return with the cash in ten hours.
Never having robbed a bank before, Nick doesn’t know where to start – but he’s got to start quickly – so he ropes in his estranged best friend Chet (Aziz Ansari) to help. Chet, a geeky high school teacher, is hardly best placed to be a particularly useful accomplice, but the pair have no choice but to come up with the cash before Nick explodes.

Ruben Fleischer follows up his recent cinematic success, Zombieland, casting that film’s star Jesse Eisenberg in a similarly sharp and snappy action comedy.
30 Minutes or Less is more crude, playing it for laughs and generally getting them.
Eisenberg is carving himself a niche playing fast-talking protagonists who, outside the context of the film in question, wouldn’t be at all sympathetic – in The Social Network, he did the over-achiever and here, he’s the obverse, a self-important loser who thinks the world owes him, but fails to achieve anything, through laziness, lack of direction and possibly a fear of failure. Who would have thought that the skilled and speedy driving he’d practiced, trying to deliver pizzas in “30 minutes or less” would have come in useful in another arena?
Eisenberg’s banter with Aziz Ansari’s teacher and flat-mate frequently finds itself in the realms of sketch comedy, but with impeccable comic timing, it’s always a breeze – and Danny McBride and Nick Swardson play off each other like they’ve been practising their routines since the were kids.
The key characters all seem to be enjoying making the film as much as the target audience will enjoy watching this consistently sharp and funny, well paced cheeky fun.
And from the moment Eisenberg makes a sly reference to his last big role, this film bursts with effective cultural references.
There are unquestionably a handful of contrived and incoherent plot points that would’ve derailed the film had it taken itself too seriously, but they’re forgivable given its light-hearted attitude.
30 Minutes or Less, by virtue of its genre, has no pretentions that it’ll be collecting any awards, but for what it sets out to do – entertain with a slice of witty, fast-paced fish-out-of-water action – it’s a cut above its competitors.
It does what it says on the tin – except deliver in 30 minutes or less.