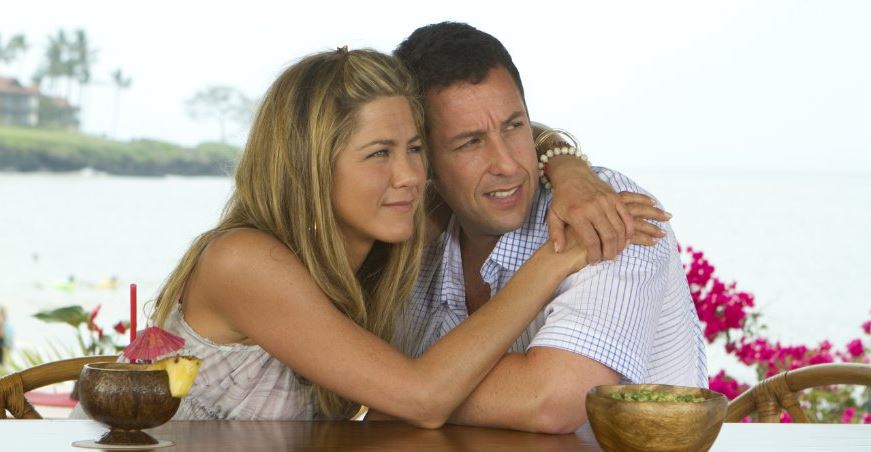 Years after big-nosed trainee surgeon Danny (Adam Sandler) walks out on his wedding after overhearing his bride boasting about sleeping with another guy on her final night as a single woman, he has become a plastic surgeon and done a bit of work on his own nose – as well as many of the best bums in Hollywood.

Left emotionally scarred by his experience, he hasn’t had another proper relationship, but using his wedding ring as a prop, he’s managed to lure dozens of women into one-night stands.

At one party, unusually without his wedding ring on, he gets together with the gorgeous, young Palmer (Brooklyn Decker) and they spend a beautiful night together on the beach. Danny really feels that this could be the one. As Palmer is rummaging around in his trouser pockets to find a business card with his number on it, she finds the ring and takes a step back.

He has to think quickly.

Unable to tell her the truth, he blurts out that he is married, but is getting a divorce.

Not wanting to be hoodwinked, Palmer demands to meet the wife.

To make the scenario seem all the more convincing, Danny and Katherine make up a fake boyfriend for her.

All is going well, until Katherine takes a call from her kids, which makes Palmer think they’re Danny’s, so she wants to meet them too.

The group end up taking a trip to Hawaii – Danny, Katherine, her kids, Palmer and Katherine’s fake boyfriend.

As you might expect, one lie just leads to another, and the fibs keep getting bigger and bigger and even though they come up with the mantra “Just Go With It,” this becomes increasingly difficult to do, when Katherine bumps into her childhood nemesis Devlin (Nicole Kidman) – apparently happily married, and she’s determined to show her that her life is equally blissful.

Trying to persuade Devlin that her marriage is happy and strong, while she’s trying to persuade Palmer that it’s long since fallen apart makes the charade all the more difficult for Katherine as – you’ll be surprised to hear – she and Danny start to develop feelings for each other.

This is pretty much the kind of low-brow fare you’d expect from Adam Sandler; charming enough in places, but completely contrived and unbelievable in any context.

Why would he not have fessed up about the ring in the first place – surely showing that kind of emotional vulnerability would have gone down well with Palmer from the outset.

And anyone who doesn’t work out from the start – even from seeing the poster – that this is a film about how Danny and Katherine get together, should not really be earning enough money to go to the cinema in the first place.

That being the case, rather than being a sweet, romantic comedy, this is actually quite a devious film about how to crush the heart of a sweet, naive, loving and gorgeous young woman, whose only crime is to fall in love with an emotionally unavailable older man.

And stunning as she is for her age, which real-life Danny would go for the vain, insecure older mother of two precociously irritating brats over the untouched beauty of Palmer, with her whole life ahead of her?

This is a romantic comedy where we’re asked to identify with a bunch of liars and support them in their efforts to leave the only worthy character in the film heart-broken. OK, so the characters’ initial intention isn’t to break Palmer’s heart in that bitter Neil LaBute kind of way; it’s an accidental by-product of the unexpected discovery of Danny and Katherine that they like each other – but the film-makers knew from the outset. A throwaway line over the closing credits about how Palmer meets someone else on the plane home is a bit of a cop-out.

Perhaps romantic comedies aren’t meant to be taken so seriously, but to keep the audience with you, you surely need to engender sympathy for the main characters and when they ultimately get rewarded for being selfish, it doesn’t really leave you feeling particularly positive about mankind, even if you did have a few laughs along the way.