Just two days ago on What’s Worth Seeing, we if wondered whether the Academy had been brave or naïve in appointing the controversial comic Kevin Hart to host the upcoming Oscars.

We have our answer. Naïve.

With his past stand-up material – including a routine in which he said he was trying to make sure his son didn’t turn out gay – well-known, the Academy hired him for one of the least-wanted gigs in Hollywood.

After calls for an apology for his comments, Hart said the Academy had given him an ultimatum to say sorry or lose the job and he refused, saying people should “stop searching for reasons to be angry.”

Instead, he chose to quit. 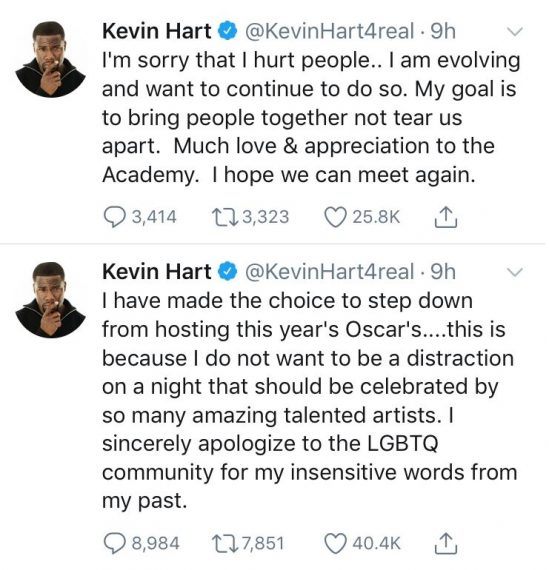 In a tweet, less than two days after boasting that he’d got his dream job, he stated that he didn’t want to be a distraction and offered a belated apology for his insensitivity. He went on to say he wanted to continue to evolve and hoped to bring people together, not tear them apart.

The development leaves the Academy in the embarrassing position of being just 11 weeks away from the big day with no host; the last time a host quit was Eddie Murphy, in 2011, after his friend Brett Ratner, stepped down as producer of the show, but that was in November and we’re now well into December, this week’s late-in—the-day announcement suggesting that they’d already had trouble finding a host.

It’s becoming increasingly difficult, in the world of entertainment in particular, to find someone who hasn’t, at some point in their lives, said or tweeted something that might have offended one group or another, forcing either them or their employer into a climb-down.

With the clock ticking, the Academy will need a safe pair of hands to step in, late doors; when Eddie Murphy stood aside, his place was taken by Academy favourite Billy Crystal. Another safe pair of hands might be previous host Ellen DeGeneres, who, this time, would have the added benefit of being acceptable to the aggrieved group.

And one way or the other, this latest Academy debacle is sure to provide material for the opening monologue.