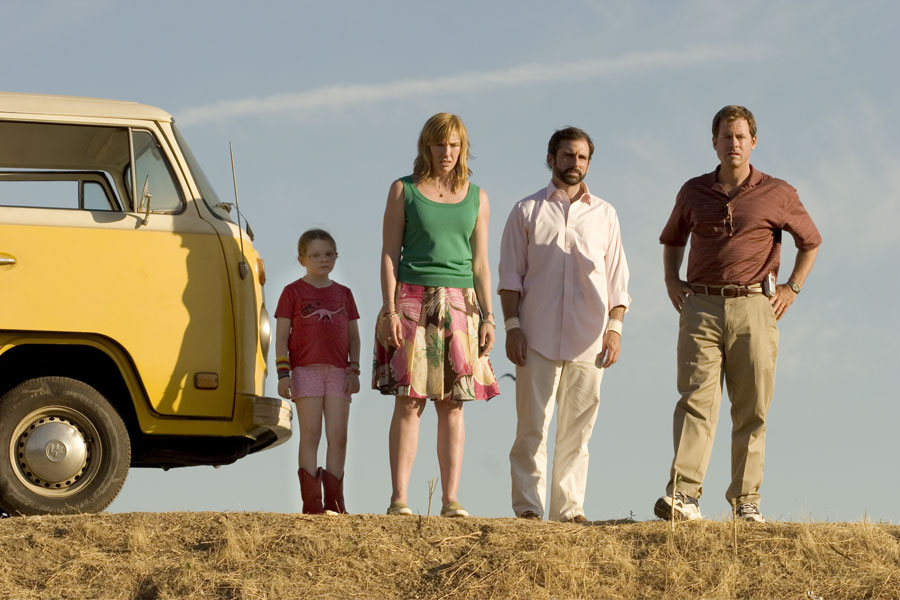 Richard (Greg Kinnear) is a motivational speaker, in need of motivation. His “nine steps” to success don’t seem to be working for him. In fact, everyone in his immediate family seems to be down on their luck.

His father (Alan Arkin) is a cantankerous old heroin addict, his brother-in-law Frank (Steve Carell) has just been released from hospital after an unsuccessful suicide attempt, his intellectual son Dwayne (Paul Dano) is only marginally less depressed, as he vows to remain silent until he’s accepted into the Air Force, and his wife Sheryl (Toni Collette) is just trying to hold them all together, by being as down-to-earth as she can be.

Perhaps because of her youthful naivety, Richard’s plain-looking, chubby young daughter Olive (Abigail Breslin) seems to be the only one to display any degree of optimism. When a disqualification leads her to be bumped up to win the state’s child beauty pageant, she’s invited to attend the national finals of the Little Miss Sunshine contest.

The whole family rallies round to escort her to California, in their clapped out VW mini-camper-van.

OK, so on one level, there’s little original in this film, combining, as it does, many familiar elements from both road-movies and dysfunctional family films.

But this is a case of two plus two making five – the total is far greater than the sum of its parts.

Never have I seen such a rag-tag group of surreal personalities, supposedly related to one another, each skewed convincingly far from the norm, but never have I seen a group of disparate characters who gel so well.

Like a real family, their overt frustrations and dislikes for each other betray deep love and mutual support.

Coming from the most unexpected places, the humour ranges from light and fluffy, through madcap to desperately dark, but all along it feels real and grips you as it takes you for a ride.

Without exception, every last one of the key cast pitches their performance perfectly.

Only one incoherence stands in the way of making this one of the outstanding films of the year – “would a girl that plain ever find herself in a beauty pageant final – and would any sensible and supportive parents think she was genuinely in with a chance of winning?”

But all but the most hardy pedants can brush this aside by accepting that it’s a figurative way of studying the importance of individuality – and belonging.

There’s certainly no question that the lives of the Hoover family will bring a ray of sunshine into the lives of yours.