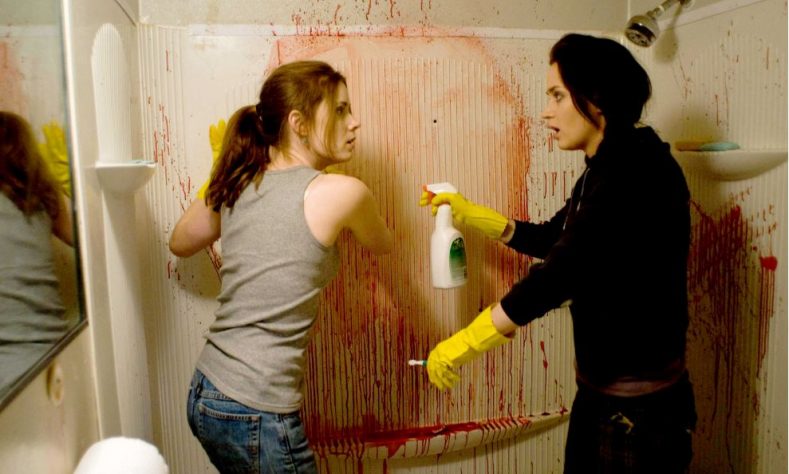 She’s now a single mother, making ends meet as a maid, and satisfying her sexual urges with a married police-officer, Mac (Steve Zahn).

Her younger sister Norah (Emily Blunt) isn’t doing any better for herself. She still lives at home with their Dad, Joe (Alan Arkin), which is just as well, as she’s just got fired from her job at a fast-food outlet.

A suggestion from Mac prompts Rose to come up with a new business idea that can help everyone out – Norah goes into partnership with her to set up and run a cleaning company with a difference – once police have finished with murder scenes, “Sunshine Cleaning” moves in to clear up after them.

But while it’s a character building – and life-building – experience for both of the girls, as luck would have it in movie-land, things don’t quite go to plan.

Producers Peter Saraf and Marc Turtletaub are trying to repeat the recent success of their Oscar-winning Little Miss Sunshine, but throwing together another set of quirky family misfits – bringing back Alan Arkin and even throwing in another cute kid.

But while “from the director of” or “starring the lead actor from” might sell a film, “from the producers of” doesn’t really cut the mustard – and recycling the word “Sunshine” seems rather desperate!

Building a blood-cleaning business simply doesn’t carry the same emotional warmth as a race against time to get an average-looking girl to a nationwide beauty pageant. And that’s one of the first areas where this film falls flat.

The characters all have goodness in their hearts, but they don’t have warmth. It feels too much like they’re trying to follow a formula, without understanding how or why the formula works.

At times, attempts to squeeze humour out of the tragedy seem uncomfortably contrived, while you feel you’re being preached at rather too often too.

The constantly flustered and rarely satisfied Amy Adams breezes through the film, with the cantankerous Emily Blunt (by name and nature) in tow, variously helped and hindered by their cranky father, a kindly one-armed cleaning-product-salesman (Clifton Collins Jr) and a desperately insecure blood-donation worker (Mary Lynn Rajskub).

It’s charming enough – and the characters are sympathetic enough to carry you with them, hoping they’ll achieve their goals.

Ultimately, it’s likeable, but largely inconsequential and the characters don’t really learn and progress in their lives as a result of their experiences.

And as if to back up this claim, there’s little point investing too much energy in this simplistic and linear story, as the denouement is tagged on in such a way that the character who saves the day could’ve done so at any point during the film. But he decides – perhaps – to wait until the film’s budget is running out, or perhaps the film-makers were just thinking “OK, that was a good scene – let’s just quit while we’re ahead.”