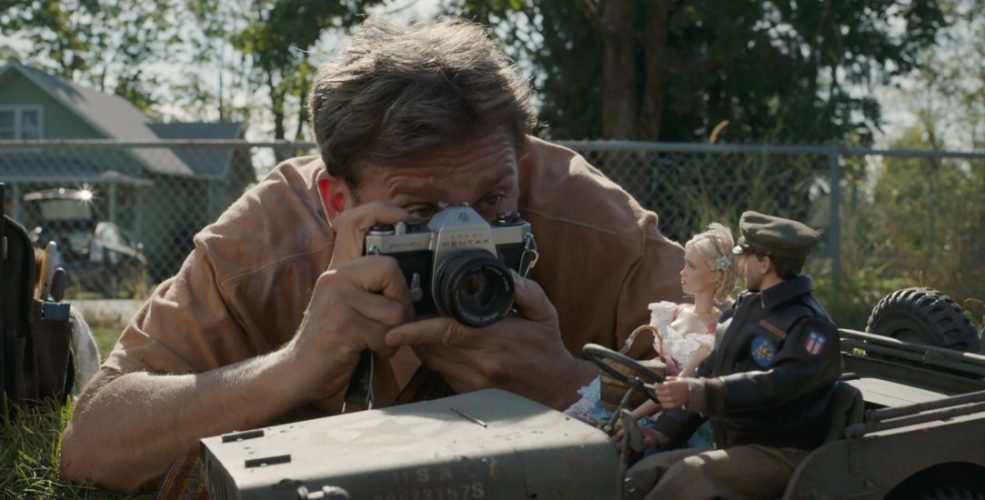 Mark Hogancamp (Steve Carell) has never fully recovered from a severe beating he received at the feet of a group of guys he’d told that he liked to wear women’s shoes.

The assault emptied his mind of everything that came before it and the only way he can now make sense of the world around him is by building his own toy town, populating it with dolls representing the people in his life and taking photographs of the scenes as he uses them to act out stories.

But the arrival of a new neighbour, Nicol (Leslie Mann), forces him to re-evaluate his life and his relationships with the people in it.

Based – as is so often the case – on an unlikely real story, Welcome to Marwen is a visually original, heart-warming examination of Post Traumatic Stress Disorder, which never quite lives up to its potential.

It’s striking cinematography blends real-life actors with Barbie and Action Man-style dolls, representing him and the people in his life, from his physiotherapist and health visitor to a local shop-keeper and his new neighbour.

In his world, Mark himself is represented by a military Captain, who’s constantly having to be rescued from Nazi oppressors by the strong women around him.

The film is at its best when the dolls come to life and it’s particularly clever when the dolls switch between being protagonists and props within the same scene.

But emotionally, the film feels oddly cold – or simplistic. Necessarily, Mark has turned off his memories and shut down his emotions, but this makes it hard to identify with him and his reawakening isn’t entirely convincing – and is more simplistic than coherent. The strongest moments include his response to the arrival of the “girl next door,” as she unwittingly helps him unlock his heart. And this contrasts so starkly with the rest of his outlook that much of this element of the plot feels at best naive and at worst mawkish.

But the inevitable lack of a back-story – or at least a clear and coherent past – makes it difficult to engage with Mark’s plight – we’re told he was the victim of a hate crime, but we never really get a sense of why it was that he was attacked – he was conventionally dressed at the time of the beating. And while it’s understandable that he might want to blank the trauma from his memory, he seems to have no interest in what happened in his life beforehand. It’s clear that all of the women in his life now are newcomers since the assault – so what’s happened to the people who knew and loved him beforehand? Or did his eccentricity predate the attack, rather than stem from it?

And then there’s the resulting art – he exhibits photographs of his installations; is knowledge of his history required to appreciate or understand his work? Without that, it’s just photographs of dolls – but does his traumatic experience change that?

Coming from a director as competent as Robert Zemeckis and with a star as versatile as Steve Carell, Welcome to Marwen is a refreshing attempt to explore themes that don’t often get a look-in in Hollywood, but it disappointingly ends up displaying as little vitality as the Barbies and Action Man dolls lurking in your own home, as they add plenty of life to these lumps of plastic, but not enough heart.