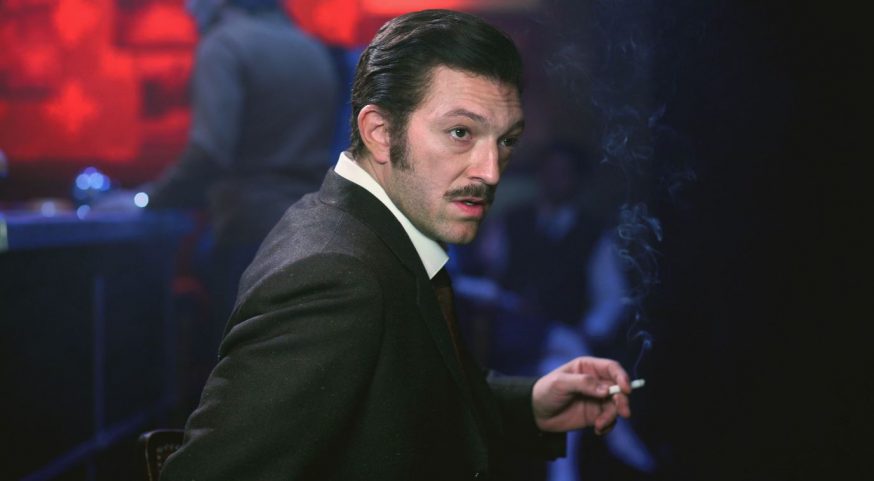 In the late 1950s, a young Jacques Mesrine (Vincent Cassel), was serving with the French army in Algeria. There, he developed – if not a taste for – an immunity to violence.

After being discharged from the army in disgrace, he returns home, where his Dad has secured a job for him in a local lace factory, but this is not the job for him.

His best friend Paul (Gilles Lellouche) has been earning some cash doing odd jobs for the local gang boss Guido (Gérard Depardieu) and gets Jacques onto the payroll.

On a trip to Spain, Jacques shows his charming side long enough to hook up with the beautiful Sofia (Elena Anaya), who accompanies him back to France and bears his children.

But he can’t – or won’t – keep his violent streak under control, and before long, he’s beating Sofia and popping rival gangsters with impunity – impunity largely because he skips the country, fleeing French justice to Canada.

There, he finds himself a new partner in crime, Sarah (Florence Thomassin) – after a bold kidnapping, the pair become known as a modern-day “Bonnie and Clyde” – and soon find themselves behind bars.

But as he always has done, Jacques Mesrine, refuses to let authority keep him down, breaking out of one of Canada’s most secure prisons and becoming the francophone “Public Enemy Number One.”

This is the real-life story of the eponymous French gangster – or at least half of it.

Frustratingly, this is part one of a two-part biopic, released tantalisingly just three weeks before its conclusion – a conclusion which appears to be foreshadowed in the opening scene of part one.

Cassel’s portrayal of a ruthless gangster, whose killer instinct has remained with him since his days in the army, is a masterstroke – evil as he is, we still root for him.

It’s fascinating to see the ageing, bloated Depardieu turn up as the Godfather of the Parisian underworld, delivering a satisfyingly overblown performance.

The other cast acquit themselves perfectly well, but serve largely as wallpaper for Mesrine’s adventures.

The film doesn’t hold its punches – the distributors are lucky to have managed to get a 15 certificate for such an unremittingly violent film about gangsters who revel in their brutality and show not a flicker of remorse.

As with many-a-familiar gangster film, this charts the rise of the nobody to gang boss, but giving him few redeeming factors (it’s based on real life, after all), there’s little of the character arc which allows us to identify with the protagonist – and each time he starts to earn our affection, he spits blood back in our face.

His monumental rise is a little too simply drawn, but it’s none the less chilling, as we watch one of the small guys finally find his purpose in life, build up his reputation as a gangster and climb to the top of the criminal underworld.

But just when you’re getting in the swing of the Canadian stage of the story, it grinds to a cheekily sudden stop, throwing out captions telling us what happened to each of the characters we’ve been following except one – the Public Enemy Number One himself.

With Kill Bill, I resented the fact that they made us pay twice to see what was essentially a single film. With this, you’ll be counting your lucky stars that you have only three weeks to wait to see the next instalment.