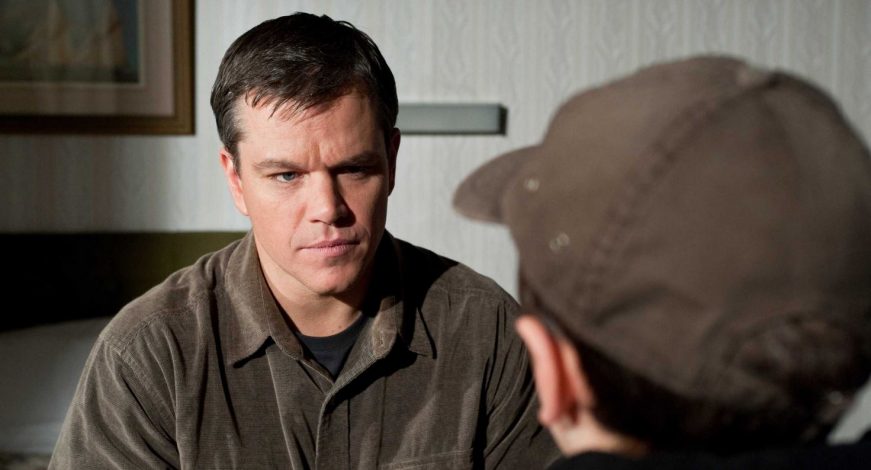 Leading French TV journalist Marie (Cécile De France) almost comes a cropper in the Boxing Day tsunami, during a holiday in Thailand. Back home in Paris, she’s suffering a severe case of post traumatic stress disorder and is encouraged to take time off work to write a book she’s been planning for years. But rather than write about François Mitterand, as planned, she ends up researching near death experiences, such as her own.

Meanwhile, in San Francisco, George (Matt Damon) has, for too long, been making a living from his powers of clairvoyance; if he touches anyone, he’s able to get messages from their dead relatives. He can’t take it anymore, not least because people seem to want him only for one thing. After he takes on a job in the docks, his brother (Jay Mohr) encourages him to return to working as a psychic. He’s also under pressure from a gorgeous single girl (Bryce Dallas Howard), with fluttering eyelids, he meets at a cooking class.

Meanwhile, in London – yes, it’s one of those – when young Jason (Frankie/George McLaren) is killed in a traffic accident, his identical twin brother Marcus finds it increasingly difficult to cope without him, becoming too much of a handful for the foster parents who take him on when his alcoholic mother is taken into care.

Right – so we’ve got three apparently unrelated stories –linked only by the theme of death. You don’t suppose the three storylines are going to intertwine somehow, do you?
Yes – it’s one of those.

Seeing the credits of this film – director Clint Eastwood, writer Peter Morgan and actor Matt Damon – all Oscar winners (OK, so Damon’s was for writing, but few critics would accuse him of being a poor actor) and movie veterans with highly acclaimed filmographies, lofty expectations wouldn’t be amiss here.

You’ll want it to work – you’ll want to like it – and the weight of those involved certainly makes you enjoy it more than it deserves, but it’s all just a bit disappointing. Despite Eastwood’s typically assured direction, a complex and thoughtful script from Morgan and a warm, pained performance from Damon, the film doesn’t add up to the sum of its parts.

The main problem is that in so many ways, it’s clunkily contrived – from the loosely thematic link between the strands (death features in everyone’s lives eventually) to the idea of three apparently unconnected stories from around the world coming together at an Ally Pally book fair.

It’s awfully clichéd too – from the twins on a London housing estate living with an alcoholic single Mum to an ageing female TV presenter, worried about being replaced by a younger model (fortuitously topical, given Miriam O’Reilly’s successful claim for ageism against the BBC) and a man burdened by his powers and wishing he could shed the one thing that makes him different (compare almost any superhero film, for starters).

Another issue is that a film that deals with death – and more specifically, what happens afterwards – will always find itself treading on controversial territory, which will conflict strongly with many people’s views. Such controversy often adds to the drama, but in this film, we’re asked to judge all the other self-proclaimed psychics as frauds, but George? He’s the real deal. Why should a film that asks us to believe that he really has clairvoyant powers also demand that we believe that anyone else in the world who claims to have similar powers is a fraud? This requires a huge leap of faith from the audience.

There are some other oddities in the film – the plot is set around some real points in history, such as the tsunami and the London bombings the following year, but they’ve changed the name of the tube station and the number of bombings. If you’re setting it in the real world, why change it? But in both cases, the tragedies were effectively realised.

It’s all rather messy. Clint Eastwood does what he can with a deficient script. Peter Morgan apparently wanted to rewrite bits of it to improve them, but was told not to bother. Most of the performances are creditable enough, but the young twins – key characters in the film – feel like they’ve come straight off the stage of a school play.

If you stepped back and watched Hereafter from a distance – not listening to the dialogue, just watching the faces and the motions – it would look and feels like a film with ambition – but the details betray the fact that it misses its target.

It feels like it should have a profound message, but in reality, it doesn’t really have one at all. It’s basically saying little more than “Stick to your guns – you know what’s best for you” – “The people you need could be anywhere in the world, but if you’re meant to meet, you’ll meet” – “Have faith.”

The team behind this film clearly had too much faith in this script, so perhaps that’s not a message worth taking away from Hereafter.