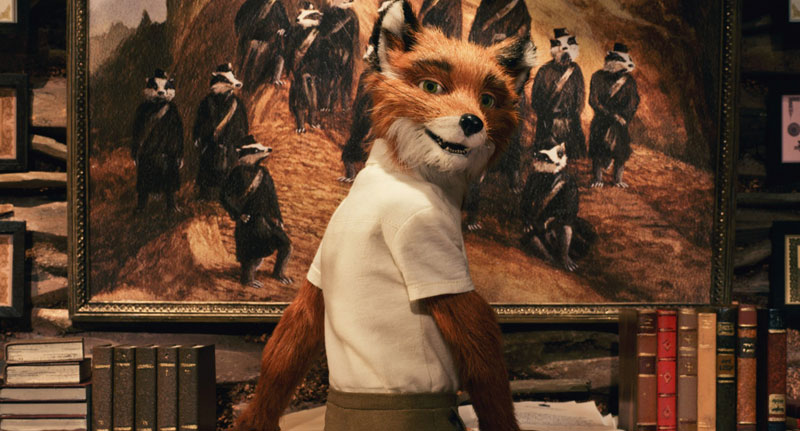 Mr Fox (George Clooney) has turned over a new leaf. He’s given up stealing poultry for his dinner. He’s taken up a respectable job as a newspaper columnist.

All he needs now is someone decent to live – he’s fed up of living in a hole and decides – against the advice of his badger friend (Bill Murray) – to buy a new home in a tree.

But when his precociously talented nephew Kristofferson (Eric Anderson) comes to stay and shows up Mr Fox’s son Ash (Jason Schwartzman), Mr Fox decides to lead the young foxes on one last raid on the neighbouring farms of the three mean farmers, Boggis, Bunce and Bean.

The farmers are understandably a bit put out by having the foxes stealing their chickens, ducks and turkeys, so this time, they put up a fight.

Realising that the farmers will stop at nothing to protect their birds, Mr Fox finds himself trapped underground, but worse, his fellow animals – rabbits, weasels, badgers and the like – are all trapped down there with him.

So Mr Fox comes up with a cunning plan to provide a banquet to feed them all.

This is a peculiar blend of the child-friendly British characters of Roald Dahl and the surreal world of Texan Wes Anderson.

If you think of rodents acting out The Royal Tenenbaums, you probably won’t be too far from what you get here.
Dahl’s original story was simplistic and linear, but while Anderson adds a back story and some extra characters, the film still feels rather linear. Unlike most works we see on the big screen, this chugs from one scene to the next, without casting ahead to where the story might go later.

The characters seem a little quirky – even for talking mammals – but the dialogue should appeal to fans of the director and with voices artists of such a high calibre, the puppets really come to life. For that is what they are – unusually for a modern-day animation, the director has gone for the old-fashioned stop-motion technique, which gives it a fresh look and makes the details of the props, costumes and sets all the more impressive, knowing they’ve been lovingly crafted by hands and not computers.

Watching the fur bristling from frame to frame is a delight.

But while it’s visually arresting, it does feel stretched as there’s a lot of seeing the same kind of thing over and over again, as our heroes visit first one farm, then the next.

There’s little dramatic tension or excitement for adults and the dialogue isn’t as brutal as Anderson would have delivered for an older audience.

While some of Anderson’s themes – such as family relations – are plain to see – the animation and Dahl’s source material brings in an audience of children who necessarily take a lot of the sting out of his oeuvre.

Why did he make this film? Not because of any burning desire to, one feels. Almost certainly, like the proverbial dog, it was “because he could.” You get the impression that he just thought it might be fun get his mates round (Anderson favourites such as Owen Wilson and Bill Murray return) to play with some puppets.

But despite the mixture of accents and uncomfortable blend of accents, you do feel that he was the right director to tackle the material.

It is fun – and you will laugh – but unlike most films in this genre, which appeal to both adults and children, this is likely to leave both audiences wanting.

And while it’s refreshing to see the London Film Festival follow Cannes in opening with an animation for the first time, Cannes’ moving Up, with its warmth and depth, was more fantastic than Mr Fox.