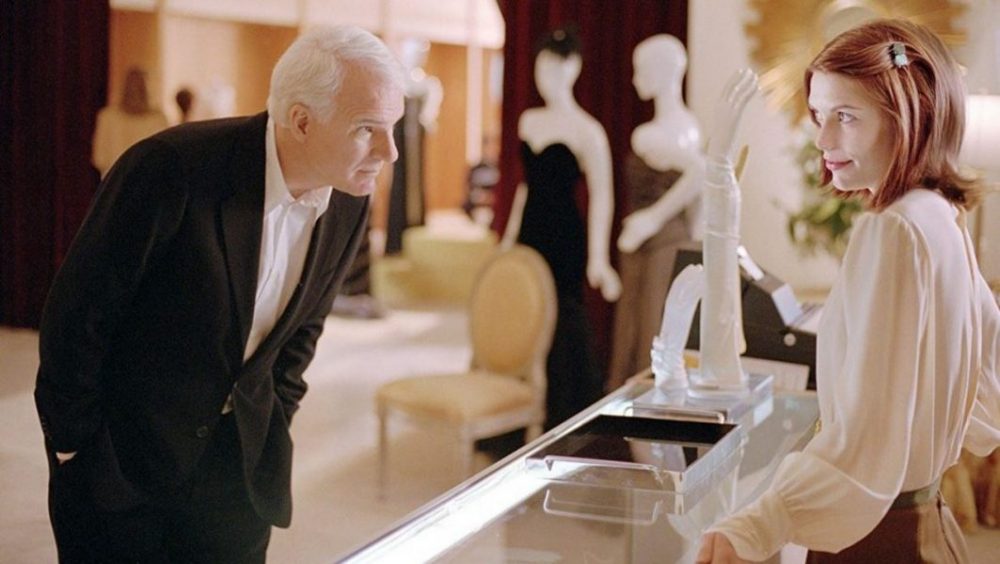 Mirabelle (Claire Danes) is a smalltown girl, who’s moved to LA to seek her fortune. She’s ended up working in a shop, selling gloves. OK, so it’s the poshest department store in Beverly Hills, but a shop, nonetheless.

Almost simultaneously, her social world becomes a social whirl, when she meets Ray Porter (Steve Martin) – a debonair, wealthy businessmen, in need of commitment-free female company – and Jeremy (Jason Schwartzman) – a scruffy slacker, who dreams of being a roadie for the rock bands that use the speakers whose logo he designed.

Mirabelle finds herself caught between the emotionally cold comfort of Ray and the empty enthusiasm of Jeremy, in this slight but charming comic drama.

Steve Martin’s one of those people whose career is always interesting to watch, even if his films aren’t.

From his early “wild and crazy guy” comedies (like The Jerk and The Man With Two Brains), through his low-key dramas (Grand Canyon, A Simple Twist of Fate) to his low-brow, big-budget mainstream fare (Bringing Down a Dozen Cheap Children 8), he’s certainly versatile, but as his career has progressed, he’s eschewed danger and excitement for predictability and unsatisfying disappointment.

Oddly, in this film, the main character is torn between the same two choices – the danger and excitement of the younger man and the predictable disappointment of a man, old enough to be her father.

This film, while far better than the popcorn fare Martin has been involved in of late, fails to approach the heights of his earlier movies, but it does have a lot to recommend it.

It’s a poignant film about self-discovery, told with warmth and gentle irony.

But gone are the days when Martin is the star – he takes a key supporting roles instead. As the author of the source material, he’s turned himself into a bit of a Woody Allen character here – a man of about sixty, having a relationship with a woman a third of his age. It’s actually quite creepy at times – while someone younger, like George Clooney, would’ve been an easier watch in this role, we’re left crying out for the wild-and-crazy guy. All the comedy comes from Schwartzman.

Sticking to the Woody Allen analogy, like Match Point, this is a film which can – and should – be enjoyed, to an extent, for what it is – rather than for the cinematic giants of yesteryear who are desperately clinging to the present, rather than basking in the past or reaching for the future.

But what am I saying? For his next film, Martin will undoubtedly be turning in an energetic performance, as he puts his own spin on Inspecteur Clouseau, and I fear I’ll be criticising him for doing what I’m currently criticising him for not doing. Maybe I’m just desperately clinging to the past, rather than letting him pull me into his future.