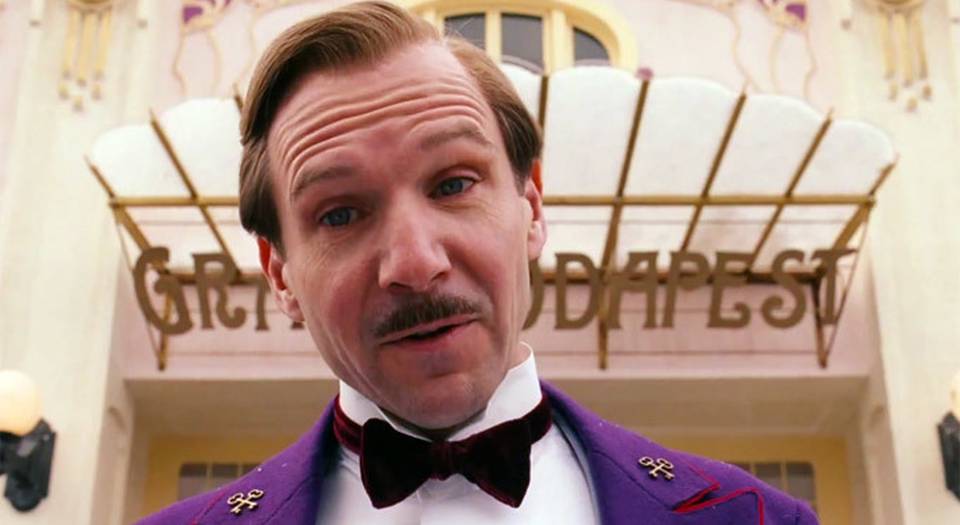 In the faded opulence of the once more suitably named Grand Budapest Hotel in the fictitious eastern European state of Zubrowka, its owner Mr Moustafa (F Murray Abraham) explains to one of the few visitors (Jude Law) how he came to take over the establishment.

We flashback to the 1930s and find the hotel enjoying a period of grandeur, with high class clientele coming from far and wide to enjoy the services provided by the elite concierge, Monsieur Gustave (Ralph Fiennes). Some might feel that those services go a little far for a concierge, but they keep lonely – and wealthy – old ladies, such as Madame D (Tilda Swinton) coming back for more.

When young Zero Moustafa (Tony Revolori) arrives at the hotel as a lobby boy, he is quickly taken under M Gustave’s wing. Soon afterwards, M Gustave receives word of Madame D’s passing and takes Zero with him to visit her family to pay their respects.

But the pair find themselves in the middle of a family feud as Madame D’s will reveals that one of her most valuable paintings is to go to M Gustave. Her son Dmitri (Adrien Brody) doesn’t want to let such a treasure leave the family and sends his security boss (Willem Dafoe) to neutralise the threat to his inheritance. The local police, meanwhile, are also investigating whether Madame D was murdered for her wealth.

With the help from Zero’s girlfriend and a secret society of eastern European hotel concierges, M Gustave and his protégé set out to prove their innocence and restore justice to Madame D’s memory.

OK, so the plot might sound a little convoluted and it is, in fact, even moreso than that – there’s another whole level of “story within story” to contend with, but Wes Anderson, in one of his lightest and most entertaining films in years – and that’s saying something – helpfully distinguishes between each level of narration by using different visual formats; the bulk of the film, following M Gustave’s adventures with Zero, is shot in the old TV format, 4 x 3, which in some films works fine, but in this case, you might feel cheated.

The thick black bars on each edge of the screen mean there’s less of the gloriously sumptuous sets, landscapes and costumes to marvel at, but the screen is continuously busy with exciting detail nonetheless.

Every level of this work has been lovingly planned, from the precision of the staccato performances – Ralph Fiennes is particularly effective as the flamboyant but no-nonsense centrepiece – to the intricate production design. Recalling his recent success with Roald Dahl’s Fantastic Mr Fox, Anderson somehow directs this film as if it’s an animation – even the characters seem to move around the screen like their own avatars.

From a distance, the bold colour-palette and exaggerated characterisation would make the film look like it’s aimed at children, but the sharp wit of the dialogue and precision of the direction successfully targets adults with a penchant for arch storytelling and surreal humour.

Under the surface of this delightful confection, Anderson manages to insert layers of darkness that don’t feel out of place – evidently set in the lead-up to the conflict that brought Europe to its knees, and with occasional bursts of mob violence that certainly shocks. For every element of character comedy and crime caper, there’s gangster violence and high society corruption.

Anderson has a unique gift for making films that could not possibly have been made by anyone else – over the years, he’s built up a repertory company of actors, many of whom turn up in welcome cameos here, without detracting from the central characters. And there are enough newcomers to wonder, with excitement, how they might feature in his future work.

The Grand Budapest Hotel is relatively light on emotional content and gravitas but heavy on glorious cinematic delight. It won’t stay with you for long, but it’ll be one of the most enjoyable 100 minutes you’ll spend in the cinema this year.