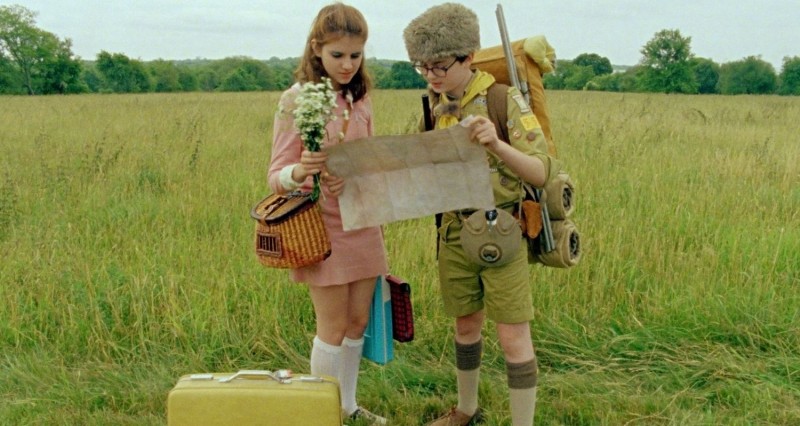 Scout Master Ward (Edward Norton) sends out a search party when one of his troop, Sam (Jared Gilman), escapes from their camp site.

It turns out that Sam and Suzy have been pen-pals since they met at a school play a year earlier, and they’ve been planning to elope.

With the police, her parents and his scout troop on their tail, Sam puts his wilderness skills to the test as the pair do their best to avoid capture as they try to get off the island and start a new life together, without any of those pesky adults to make their lives a misery.

From the opening tracking shot, which appears to be of the inside of a doll’s house, Wes Anderson takes you into his own surreal world in which he appears to fill the background with minor details he couldn’t work out how to get into the film otherwise.

It’s a children’s adventure film whose quirkiness is pushed right to the limit of acceptability, but never quite crosses it.

The story is simple and sweet, the production values – whether cluttered or neat-freak – are immaculate and accurate to the 1960s period and the crackpot characters who inhabit Anderson’s world.

The children in the lead roles are tremendous – Sam’s a loveable geek and Suzy’s a cantankerous teen who hates everything in the world except Sam and her music. Anderson regulars Bill Murray and Jason Schwartzman are on auto-pilot, but no less enjoyable for it, while Frances McDormand’s domineering, megaphone-wielding mother is as frightening as she is reassuring.

Tilda Swinton, as an officious social worker who dresses more like an air hostess, also delivers an interesting turn.

Bruce Willis proves that he can still do comedy and it makes a refreshing change to see Ed Norton having some fun for once.

Anderson is one of those love-him-or-hate-him film-makers who tells simple tales with an idiosyncratic twist.

Sometimes, he pushes it so far that even those who love him hate him, but with Moonrise Kingdom, he’s back on the kind of form he hasn’t produced since The Royal Tenenbaums, more than a decade to go.

The film isn’t particularly challenging to watch and although it touches on themes such as loneliness and loyalty, it doesn’t really have much to say.

But it’s thoroughly entertaining, cheekily charming and you’d have to be made of stern stuff not to leave the cinema smiling.