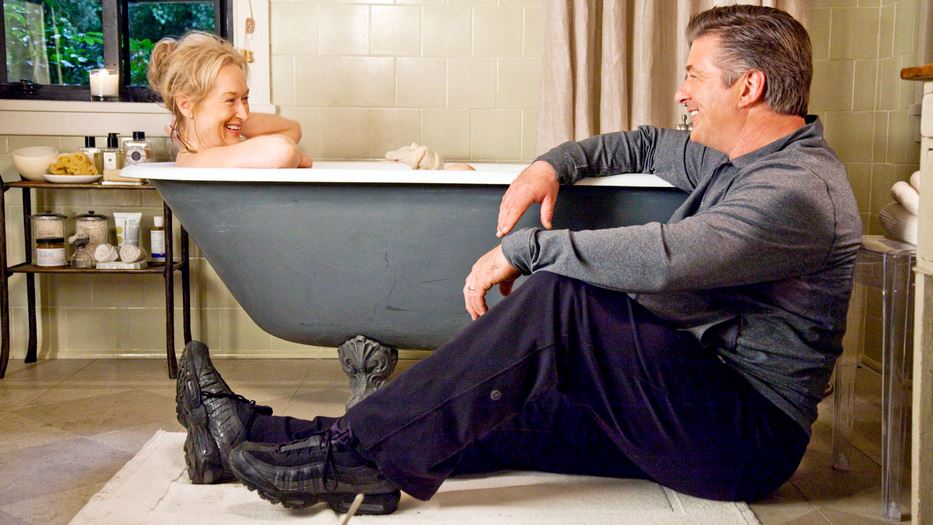 Ten years after their divorce, Jane (Meryl Streep) and Jake (Alec Baldwin) bump into each other at the anniversary party of a couple who got married in the same year that they did. They’re polite to each other – but Jane scowls at the arrival of Jake’s new much-younger wife, Agness (Lake Bell).
Soon afterwards, the exes are both in New York for their son’s graduation – and find themselves sharing an intimate drink at the hotel bar. Before long, it’s more than just the drink that’s intimate.
Jane delights in telling her gal pals about the irony that ten years ago, Jake left her for another woman – and now, she’s the other woman to his new wife.
Outside her close circle of friends, of course, this complicated arrangement is top secret – until Harley (John Krasinski), who’s dating one of their daughters, spots them together at a hotel.
To add to the complication of the situation, Agness is desperate for another child, making it increasingly difficult for Jake to slip away to see Jane – and Jane starts dating her architect Adam (Steve Martin), when he expresses an interest, outside building her extension.
When Adam turns out to be quite a good catch in his own right – charming, funny and not at all complicated – Jake finds this hard to take.
Relations start getting ever more complicated as Agness gets jealous of the woman whose husband she stole, while Jake gets jealous of Adam, when his ex-wife-current-mistress starts showing an interest in someone far more appropriate.
This is all sounding a bit complicated, isn’t it? The clue is in the title.

Do you ever feel there just aren’t any films out there aimed at you? Clearly, sixty year old Nancy Meyers does, but she’s in a position to do something about it – she can make them herself.
The woman who recently brought us Something’s Gotta Give – a romantic comedy targeted very firmly at the over fifties – now brings us It’s Complicated, serving exactly the same audience.
It’s a neat concept – because the ten year distance since their divorce allows Meyers to explore such themes as middle-aged sexuality and general mid-life crisis – while providing children who are old enough to work out what’s going on, but have no idea how to handle it.
In Alec Baldwin and Meryl Streep, Meyers has two actors working at the top of their game – Baldwin settling neatly into the comic persona he’s increasingly inhabiting of late (after his huge success in 30 Rock) and Streep effortlessly settling into a complex role, which straddles the lightness of films such as Mamma Mia and Devil Wears Prada with the depth of performances such as in Lions For Lambs or Doubt.
It seems odd, looking at their resumés, that it’s Steve Martin playing – or underplaying – the straight guy. Is it ironic casting or are his comic talents just being wasted? That said, some might argue that he’s kind of filed them away of late, anyway. But there are a couple of fleeting moments where his light comic touch jumps off the screen, just to remind us of his past glory days.
There seems to be, perhaps, one too many children in the mix – but John Krasinski’s future son-in-law just about succeeds as coming off loveable, as he manages to pull in his performance just the right side of “so irritating that no jury would convict.” A fine balancing act.
In tone, the film isn’t quite sure where to pitch itself – it’s clearly going for “rom-com” and largely succeeds – but it can’t seem to decide whether it’s shooting for farce or more grown-up humour – at times, sitting uncomfortably between the two.
It’s perhaps at its most successful when it’s in the area of farce – Krasinski’s attempts to keep the secret work nicely and Baldwin’s skype moment will go down as one of the cutest gags in modern film – but other parts of the film are more uneven.
The plot is not so much complicated as rather hackneyed and oddly formulaic and the comedy is largely very tame. But with 50+ actors playing 50+ characters, it’s very much the kind of warm, harmless and cozy comedy you can sit down and watch with your parents!