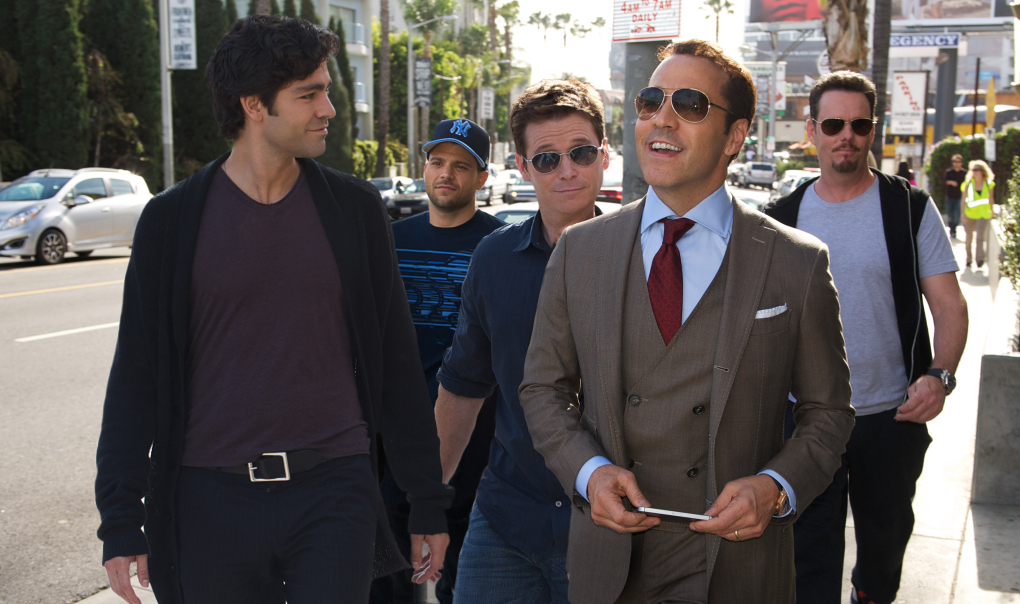 A few years after we last met Hollywood megastar Vincent Chase (Adrian Grenier), his fast-talking foul-mouthed agent Ari Gold (Jeremy Piven) has persuaded his wife to let him come out of retirement to take over as the head of production at a major studio.

Ari has laid everything on the line for his first blockbuster – not only does it star Vince, but he even allowed the actor to direct the $100m science-fiction epic, when he’s never directed before.

Vince and his entourage – manager Eric (Kevin Connolly), brother and failed actor Johnny (Kevin Dillon – fittingly, Matt’s less successful brother) and driver Turtle (Jerry Ferrara) – assure Ari that he has nothing to worry about – the shoot went fine, the footage is great, it’s coming together well…but they just need a bit more money to finish the edit.

Without having seen the rushes and taking Vince’s word, Ari goes to the film’s backer, Texan billionaire Larsen McCredle (Billy Bob Thornton) to beg for more cash. Larsen sends his cantankerous son Travis (Haley Joel Osment) back to LA to decide whether it’s worth the extra investment.

With their own reputations and personal lives up in the air, can Ari, Vince and his entourage pull off another Hollywood success?

While there’s much to enjoy in this film for anyone who’s into behind-the-scenes Hollywood and romantic comedy, Entourage is largely aimed at people who know – and like – the TV series of the same name.

Over the years, fans got to know the smooth young star Vincent Chase (modestly based on the film’s executive producer Mark Wahlberg), his agent Ari Gold (the fabulous Jeremy Piven) and his entourage (a rag-tag band of pals who are always there for the man who elevates their otherwise humdrum lives to Hollywood A-list status).

This film is Wahlberg’s gift to those who are intrigued to know what happened to the gang after the TV series was cancelled.

It’s pure fantasy at every level – from the film-within-a-film itself to the lifestyles of all those involved, with their fancy houses and powerful cars – but if you’re with the characters, which anyone knowing the TV show will be – otherwise why would they go? – it’ll be an entertaining leather-upholstered, top-down ride through what is essentially a feature-length episode.

It doesn’t set the world on fire, reveal anything we don’t already know about show business or even tell us much more about the characters than we already know, and many of the plot points feel as contrived as something out of a simple sitcom.

But as the name suggests, the Hollywood star at the centre of this film is perhaps the least interesting thing about it. More interesting than the fate of this red giant is that of the rest of his constellation, the entourage of the title – seeing Eric’s woman troubles continue, as Turtle battles to show he’s more than just a driver, while Johnny struggles to show that he’s a more than just a hanger-on, in one of the more emotional turns on screen.

But it’s the pulsar of Ari Gold’s Hollywood executive that constantly energises the screen, an unexpectedly unpredictable performance from the young man who used to see dead people that provides the intrigue and a galaxy of self-playing cameos, including Liam Neeson and Kelsey Grammer that deliver much of the satire.