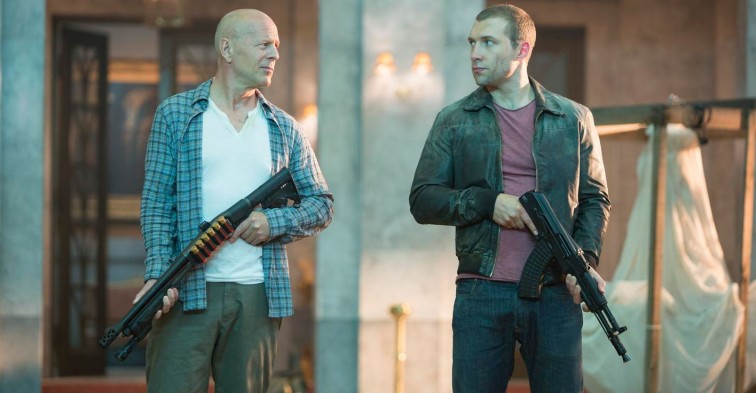 When New York Detective John McClane (Bruce Willis) hears that his estranged son Jack (Jai Courtney) could be facing the death penalty for murder in Moscow, he drops everything and flies to Russia to try to save him.

Just as John arrives in Moscow, Jai is in the process of breaking free, with a fellow inmate, a political prisoner, Komarov (Sebastian Koch), who claims to have information that could bring down a powerful politician, Chagarin (Sergey Kolesnikov).

John and Jack meet by chance, just as Chagarin’s henchmen start to give chase. John, Jack and Komarov make it to a safe house, where it emerges that rather than being a hired killer, Jack is actually a CIA operative, trying to get the same information from Komarov that Chagarin is trying to keep hidden.

With no help from the US, the abandoned CIA agent and his estranged-cop father are on their own, as they find themselves squeezed between both sides of a bitter battle between powerful Russians that turns out to be about more than just political rivalries, when a plot to get their hands on nuclear weapons bubbles to the surface.

Car chases, powerful guns, aircraft crashes, people falling from buildings – it’s all in a day’s work for John McClane, as anyone familiar with the Die Hard franchise will know.

Despite all the danger, as we’ve heard him reassure many people before, we know he’s “not going to die today,” not least because film 6 is said to be in the offing.

Superficially, the main difference with episode 5 is that it’s set outside the US, but once you start digging below the surface, it’s clear why this fails where its predecessors succeeded.

Firstly, in the previous films, it’s been about how John McClane, as a modern-day lone-ranger, saves the day on his own. Here, he’s working with his son, and not just any son – an estranged son – so we can add a layer of father-son bonding to the action.

Then there’s the fact that rather than being set within the claustrophobic confines of a building, a plane or even a city, the sprawling action here takes us from Russia to Ukraine, darting from one location to another, making it feel more like a Bond or Bourne film than part of the Die Hard anthology.

Similarly, rather than the usual conceit of him being the wrong man in the wrong place at the wrong time, this time McClane goes looking for trouble.

Perhaps the biggest failure is that where the previous films in the franchise were as memorable for their immensely charismatic antagonists – Alan Rickman, William Sadler, Jeremy Irons and Timothy Olyphant – as for our hero, none of the bad guys here seem to have any idiosyncratic charisma at all, something that’s not helped by the fact that the twisting and turning plot makes it difficult to work out who the real bad guys are.

Finally, part of the charm of the series has been the light-hearted banter, Willis’s wit and one-liners, but this film is almost entirely without levity.

The non-stop action is neatly handled, with well choreographed car chases and gun-battles and some impressive stunts; in an interview with UKscreen, Willis played down the role of CGI in these sequences, but unless Willis and the new Jason Statham, Jai Courtney (most recently seen in Jack Reacher) were really thrown hundreds of feet through plate glass windows or hanging from a truck as a helicopter slammed it into the side of a building, this assertion seems a little disingenuous.

A Good Day To Die Hard is an entertaining ride visually and works as a bog-standard action film, but falls flat on its face narratively and fails to live up to expectations set by the far superior earlier films – and doesn’t really fit into the franchise at all, apart from the fact that it stars Bruce Willis.

After recent releases by Arnold Schwarzenegger and Sylvester Stallone, there were high hopes for the third of the Expendables stars to have a solo film out in as many weeks, but after this effort, it would be A Good Day for this franchise to Die Hard – unless Willis can find the magic of the early films, he shouldn’t bother with number 6, when he’s so much more interesting in other roles, such as The Sixth Sense, Pulp Fiction, Moonrise Kingdom and Looper.